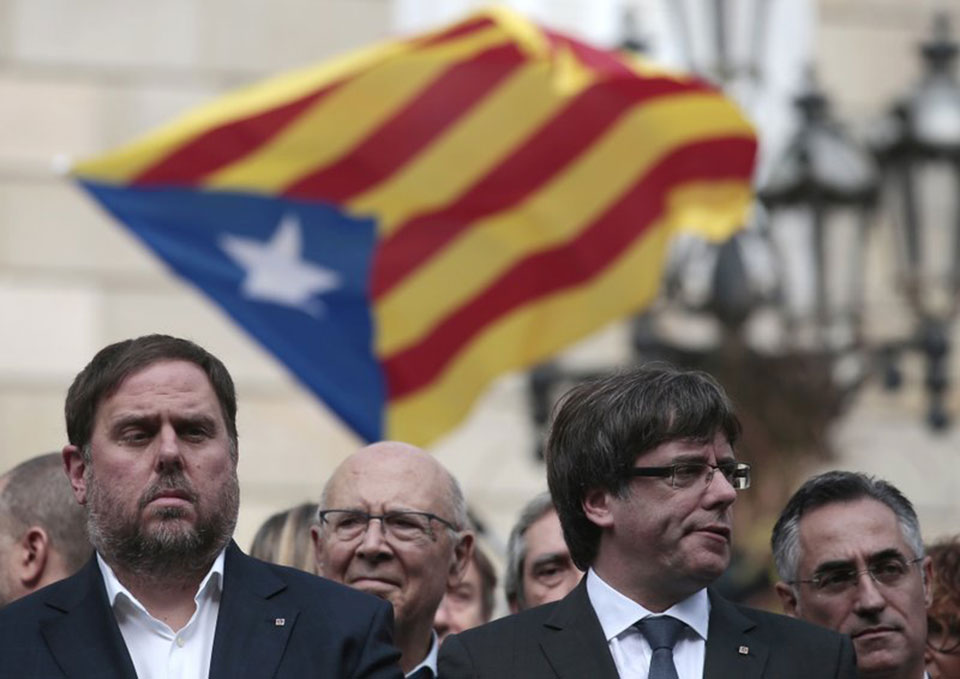 BARCELONA, Oct 3: Catalan separatists called for international mediation with the Spanish government as they pushed ahead Monday with plans to declare unilateral independence this week after a violent police crackdown scarred a disputed secession referendum.

The referendum debacle only deepened Spain’s most serious political crisis since democratic rule was restored in 1978. The violence on Sunday in the prosperous northeastern region left more than 890 civilians and 430 police injured when anti-riot squads moved into polling stations and dispersed voters.

Shocking videos and photos of police dragging people by the hair and kicking them were flashed around the globe, leading some European leaders to warn about any further escalation of violence.

Puigdemont called Monday for the European Union “to stop looking the other way” and urged Spanish Prime Minister Mariano Rajoy to accept international mediation in the crisis. He urged the EU to view Catalonia’s desire to break away from Spain as a Europe-wide issue.

“This is not a domestic issue. The need for mediation is evident,” Puigdemont said.

Calls for restraint came from across Europe, including EU chief Donald Tusk, who appealed to Rajoy to “avoid further escalation and use of force” while agreeing that the independence vote was invalid. Several human rights organizations called for an impartial investigation into the violence.

Of the 893 civilians injured in the melee, two suffered serious wounds, Catalan health authorities said. The Interior Ministry said 39 police received immediate medical treatment and 392 others had scrapes and bruises.

But Spanish authorities commended the police, saying their response to the voting was professional and proportionate. And Spain’s interior minister said the 5,000 extra officers deployed to Catalonia would stay as long as necessary.

“I don’t think there was such a heavy hand, but in any case, they had to react,” said Spanish Foreign Minister Alfonso Dastis, calling the police reaction videos “a matter of interpretation.”

Speaking in Rome, Dastis said “some of the pictures are real, some of them are not real” but that police had simply responded when people prevented them from doing their job.

Catalan officials say an overwhelming majority of the 2.26 million who voted supported independence from Spain — they said 90 percent — but the central government in Madrid has repeatedly condemned the referendum as unconstitutional and invalid.

The Catalan president said the regional parliament will be asked to declare independence this week after final results are announced — and plenary sessions are scheduled for Wednesday and Thursday.

The euro and Spanish stocks fell Monday as investors tried to gauge what the weekend unrest in Catalonia means for the future of Spain and European unity.

The referendum fiasco brought Spain and Catalonia closer to a potentially disastrous showdown as each side said Sunday’s events proved them right.

Rajoy met with his conservative Popular Party members before seeking a parliamentary session to discuss how to confront Spain’s most serious political crisis in decades. He also met with the leaders of the opposition Socialist and Citizens parties to discuss Spain’s options, although no immediate consensus emerged.

The impasse developed after Catalan authorities decided to go ahead with Sunday’s referendum even after Spain’s Constitutional Court suspended it while assessing the claims by Rajoy’s government that the vote was illegal. The court has previously ruled against unilateral secession attempts.

Some Catalans said both sides bore some responsibility.

“I think both sides involved committed grave mistakes,” said Eric Tigra, 56. “But we must also highlight that if the people of Catalonia go out in the streets and you don’t listen to them, then something is not working right.”

So far, most European governments, the U.S. and most international bodies have backed Spain in its stance against Catalan independence, fearing that Catalonia could unleash a wave of secessionist movements. French President Emmanuel Macron called Rajoy on Monday to offer support.

“These are times for unity and stability,” EU spokesman Margaritis Schinas said, urging all sides in Spain to move from confrontation to dialogue.

Those in favor of secession argue that the region contributes more to the national government than it receives in return. Catalans already enjoy a wide measure of autonomy but the central government still controls taxation and other financial levers, as well as infrastructure projects.

I will return to Nepal on October 6: Sandeep Lamichhane
17 hours ago