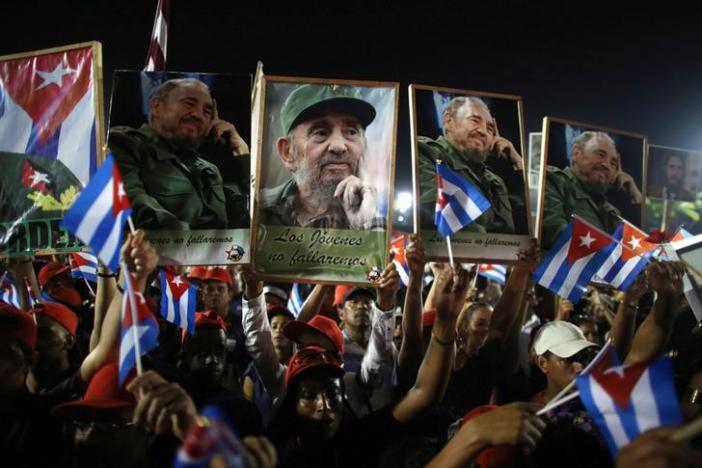 SANTIAGO, CUBA, Dec 4: Fidel Castro will be laid to rest on Sunday alongside the mausoleum of Cuban independence hero Jose Marti, ensuring that the polarizing nature of Castro's life will continue in death.

Castro and his leftist revolutionaries claimed Marti's mantle upon overthrowing a U.S.-backed regime in 1959 and later married Marti's ideals to their brand of Soviet communism, enraging other nationalists, anti-communists and Cuban exiles who also claim Marti as their own.

Castro, who survived five decades of U.S. attempts to kill or overthrow him, died on Nov. 25 age 90, a decade after resigning from office due to an intestinal illness and ceding power to his brother, current President Raul Castro, 85.

Even in retirement, Fidel Castro was beloved by leftists and anti-imperialist's around the world and hated by political opponents who believe he ruined Cuba with a one-party state and socialist folly.

Hundreds of thousands of Cubans flooded plazas and lined highways in tributes to Castro as a funeral cortege drove his cremated remains some 600 miles (1,000 km) from Havana to Santiago, the city where Castro launched his revolution in the 1950s. Raul said "millions" came out to pay respects.

Marti, a leading poet and writer who penned the lyrics to the song "Guantanamera," provided intellectual heft behind the reasons for breaking from Spain and safeguarding Cuban sovereignty and national identity from foreign powers such the United States.

He died in battle in 1895 during Cuba's war of independence from Spain.

"The union of two ideas was very important for the Cuban people," said Maria Martinez, 50, who works in a museum. "Fidel is a follower of Marti's ideas."

Castro's cremated remains will be entombed next to Marti's castle-like mausoleum in Santiago's Santa Ifigenia cemetery.

Busts of Marti appear everywhere in Cuba, Havana's international airport is named after him, and there is a towering monument to him in Havana's Revolution Square.

But Fidel Castro will not receive similar treatment. Raul Castro announced on Saturday that, respecting Fidel's wishes, no streets, plazas nor public buildings will bear Fidel Castro's name, and no statues nor monuments will be built in his honor.