Cashing i n on ideas

Even if you have an amazing idea or an amazing team, money still is a crucial factor to start and run businesses. The need for capital doesn’t end but keeps increasing even after your business has grown from the start-up it was. In Nepal, although the access to capital is scarce, there are various mediums and organizations that can help you and provide you with the funds, given that you can impress them first.

Family, friends, and fools
The advertisement ‘an idea can change your life’ that has gone viral stands true in the world of entrepreneurship where an idea can make or break you. “When you have an idea, the first people who you approach for investments are your family and friends and then there are some other fools you will find who are willing to invest on ideas,” says Abhaya Poudel, founder of Reanda Biz Serve. The situation in Nepal isn’t advanced enough for big investors to want to invest on an idea, they are people who are looking for immediate returns and don’t want to risk their money. The first step for a startup is to find likeminded people who believe in your idea as much as you do. If you have a strong core group of people, you already have an advantage over other startups.

You need to first try to collect seed money from your family, friends and you need to invest on your own idea as well. If you or the people you know don’t believe in your own idea, and aren’t willing to invest on it, no one else will either. After collecting the seed money, you now have enough revenue to get started on turning the idea into a product. It is during this stage that you should really think about the impact your product will make in the society. Is there a need for this product or are you just following a trend? What is the growth potential for your product? Do you have a central idea you are focused on that all your seed money will go to or do you have several small components, none of which the divided money can sustain?

When you have answered all of these questions and have a dedicated staff and started low scale production you are now ready for the next stage.

Accelerate your business
When you have gained a little traction in your business, and your seed money has run out but you still need ideas and opportunities to grow, you need to now be on the lookout for an incubation center or an accelerator program. Antarprerana is one such company which takes young businesses under their wings and mentors it to reach its full potential. “We are aware of all the coverage growing businesses get from newspaper articles and social networking sites,” says Niraj Khanal, founder and CEO of the company. “The companies that approach us are through word of mouth basis and referrals from other people,” he says. The only thing they really look at is the business and how much the businesses have built up by themselves.

It is not necessary that an entrepreneur who opens a startup is an all rounder and well versed in all aspects of running a business. The incubation centers and accelerators work to bridge a gap between the knowledge business owners have and the knowledge they need to run their businesses. This is also the stage where you need to be social media savvy as a business. “There are some accelerators who have opened applications you can fill and have a chance to be shortlisted to present your business or even your idea to a group of investors,” says Poudel. You need to really know what is going on in the small ecosystem of start-up businesses. There is no specific time you are in an incubator. It depends on your learning curve, and you may even get to skip a step and find an investor through networking.

An angel who will invest
Angel investors are small investors who see potential in your business and sometimes even your ideas. These people can be entrepreneurs who have taken their business to a level where they are generating revenue and don’t have to be completely involved in things anymore. They can also be people who are willing to take risks and have seen a growing trend in investing on startups abroad. The investment these people make are not very significant and are almost always between 10 to 20 hundred thousand rupees.

“We look at the person behind the idea and the strength of the idea itself when investing as an angel investor,” says Poudel, who is an angel investor himself. He has invested in five startups so far, Treadpaints being one of them. The hardest thing a startup has to do to attain an angel investor is to be able to convince people to believe in their ideas as much as they do. Since there aren’t any numbers to go by yet, angel investors are taking a huge risk by putting their money into the idea or the startup. However, the contribution of an angel investor is significant and becomes an early growth investment for the company.

High stakes investors
When regarding any business investors look for the three P’s – the People, how the product has been positioned and then the product itself.  “One of the first things we look at as investors are the core group of the company,” says Ashish Shrestha of Seeds Investment. The situation of the country is such that youths want to leave and go abroad, which makes the people and their commitment to the company one of the most important factors for investment. ‘What happens when a person gets DV? Will they be willing to give it up?’ is one of the questions they frequently ask and are often met by blank faces. The follow up question for this is ‘Do the companies have competent people running it, so that somebody leaving won’t have direct adverse effect?’

Investors look not just at the person with an idea, but the team they have to execute the ideas as well. If you are opening a restaurant and have a chef who has worked for one, there are higher chances of you getting investments as compared to a restaurant which has chefs with no prior experience. An investor who holds shares of your company will want assurances that they will get returns out of their investments. A strong team of people, who can execute their work well, is highly sought after by investors.

To get big funding it is better if you are a business that has been running for at least a year. “It doesn’t matter if your products only cater to a niche crowd. If you have positioned your product well then the chances of you getting an investor rises. A market, however small, shows that there is a clientele who will buy your product and acts as proof that there is potential for growth. In the end, no matter how innovative an idea, it all comes down to numbers.

Ujjwal Chand of Kriti Capital and Investments reveals that although there are innovative ideas being invested on, investors are still more inclined towards the traditional economy. These include the likes of restaurants, chain hotels, and hydro-power projects. The reason for this is the fact that these investments are relatively risk free. The market for it has been researched on and the likelihood of getting no returns from the investment is low.

An advice Shrestha has, for businesses looking for investments, is to not be everywhere at events and media. This makes your business look larger than it really is and you may not be able to convince investors that you are, in fact, in need of investment.

Help from the government
Poudel and Khanal are both involved in making a startup policy that they have presented to the government. Khanal is also on the startup committee. The policy is under review and Khanal remains positive that it will be implemented soon. To aid the growth of startups the government has also scheduled a two day startup summit which is scheduled to be held on the June 7-8. It is expected to bring together more than 300 entrepreneurs in the country. The government has also decided to provide 500 million as a risk capital for deserving, aspiring entrepreneurs. They plan to invite the private sector and non-residential Nepalis to invest on this capital as well. 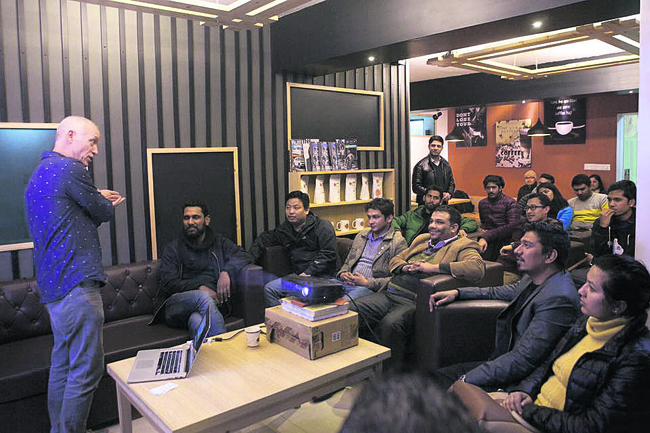 Ideas to get your employees moving

Healthy workers are great for business they take fewer sick days, cost less to insure and tend to be happier... Read More...

Coronavirus insurance claims worth Rs 11.5 billion yet to be settled
4 hours ago