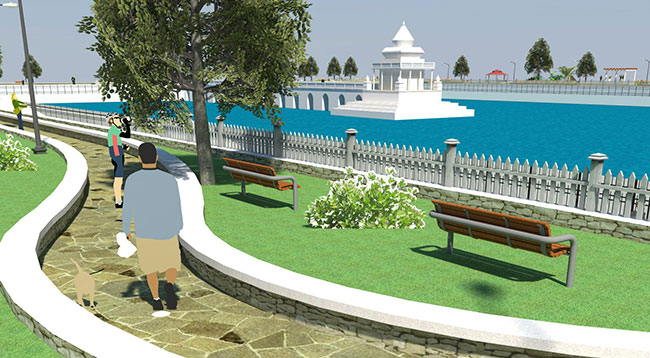 KATHMANDU, March 5: A case was filed against government employees, citing violation of norms in the reconstruction of the Ranipokhari, the historic pond situated at the heart of Kathmandu.

People who claimed themselves as working for the conservation of heritage sites moved the Metropolitan Police Office, Teku, demanding a probe into the matter and action against the guilty violating the standard.

Senior Engineer at the Department of Archaeology, Sampat Ghimire, Director at Urban Infrastructure Development Department at the Kathamandu Metropolitan City Office,Uttar Kumar Regmi and contractor Arjun Kandel have been named as defendants in the ase filed as per the Clause 3 (1) of the Government Cases Act, Nepal-1992,exercising the right ensured by the Article 32 of the Nepal's constitution, said one Monalisa Maharjan who prefers to call herself as heritage lover.

The 400-year-old artificial pond was built by the then king of Malla dynasty, Pratap Malla, to console his queen aggrieved by the death of her son, was badly damaged by the 2015 April Earthquake. Presently, the reconstruction works have been halted due to internal disputes. Authorities concerned have been accused of ignoring the originality and sensitivity of this historic site and using concrete materials in the rebuild works.

KATHMANDU, Nov 3: A contempt of court case has been registered against suspended Chief Commissioner at the Commission for the... Read More...

Case filed against four including engineer

KATHMANDU, July 1: The Commission for Investigation of Abuse of Authority (CIAA) has filed charge sheet against four persons including... Read More...