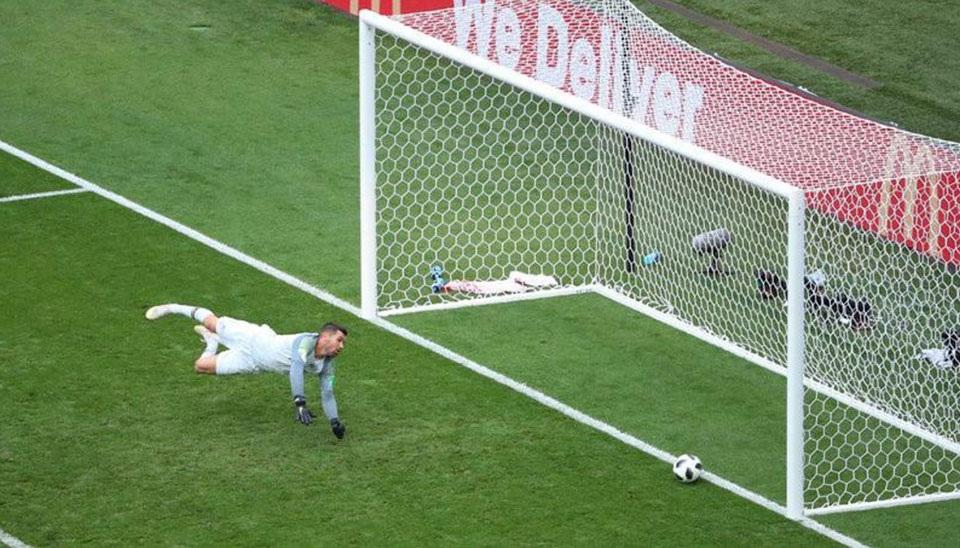 SOCHI, June 26: A stunning Andre Carrillo volley gave Peru their first World Cup goal in 36 years before captain Paolo Guerrero grabbed a second as the Andean nation condemned Australia to a 2-0 defeat in Sochi on Tuesday and a regretful exit from Russia.

Guerrero set up Carrillo’s 18th-minute wonder goal from the edge of the box with a delightful cross, then scored from a deflection five minutes after the interval to send Peru’s red-and-white army of fans into ecstasy at the Fisht Stadium.

Although already eliminated, the South Americans head home on a high note, having grabbed their first World Cup win since their 4-1 defeat of Iran at the 1978 finals in Argentina.

Denied a place at the global showpiece for 36 years, Peru finished third in Group C with three points, while the Socceroos head home with just one, but more than a few regrets.

France topped the group with seven points, with Denmark runners-up on five after the teams played out a dull 0-0 draw in Moscow.

Australia had needed to beat Peru and for France to defeat Denmark so the result was academic for the Socceroos.

But Bert van Marwijk’s side would have felt it was a case of deja vu, as they surged forward in numbers but lacked the polish to conjure a score.

Captain Mile Jedinak blazed over the bar in the fifth minute while winger Mathew Leckie was denied in the goalmouth by a scrambling defence in the 36th.

Not even an early second half injection of talisman Tim Cahill could spark the Socceroos, their 38-year-old striker denied a goal in his World Cup swansong when he fired a volley straight into a Peru defender on the hour mark.

DEFENSIVE ERROR
Australia have long yearned for a cutting edge up front but it was a defensive error that sent them on course for a stinging defeat.

With a long ball inadequately dealt with, Guerrero was allowed possession at the left of the area, and the captain wheeled a cross into the path of winger Carrillo who hammered the ball into the left corner of the net.

It was the Andean nation’s first World Cup goal since Guillermo La Rosa scored in a 5-1 defeat by Poland at the 1982 finals in Spain.

Australia tried to rally through midfielder Tom Rogic who barged through a nest of defenders into the box in the 27th minute only to have his shot blocked.

Guerrero, whose tournament was in doubt due to a doping suspension, doubled the score in the 50th minute, a deflection off Jedinak dropping the ball in his path obligingly before his shot rebounded off Mark Milligan into the net.

From there, Peru rode their luck to the finish as the Socceroos peppered the goal in desperation but to no avail.

Peru won plenty of admiration for their battling defeats against France and Denmark, but leave Russia with a more valuable three points and the hope they will not have to wait another 36 years for their next World Cup appearance.

ST PETERSBURG, June 27:  Argentina and Lionel Messi scraped into the knockout stages of the World Cup by the skin of... Read More...