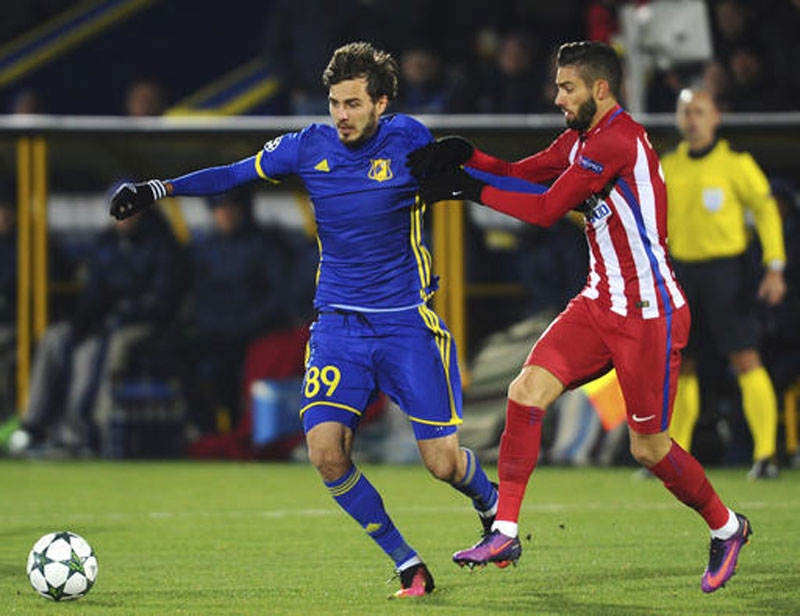 ROSTOV-ON-DON, Oct 20: Top of La Liga and now with three wins from three in the Champions League, Atletico Madrid's season so far is going to plan after beating FC Rostov 1-0 on Wednesday.

Yannick Ferreira Carrasco fired in the winner on a cold night in Russia on Wednesday, and at the halfway point in Group D Atletico is all but assured of qualifying for the knockout stages with an eight-point lead over third place.

Carrasco now boasts five goals from his last four games for Atletico after having failed to score in his first seven outings of the season. Against Rostov, the Belgium winger was all action from the start, forcing a save from Rostov goalkeeper Soslan Dzhanaev early on and twice helping to set up good chances that were missed by Angel Correa.

Against a tenacious Rostov team which had not lost at home for 26 games, the breakthrough came in the 62nd minute when Carrasco met Juanfran's cross with a fierce shot on the bounce after Fernando Torres had failed to convert from close range.

Atletico's star attacking midfielder Antoine Griezmann started the game slowly but played an increasingly valuable role in the second half and could have scored Atletico's second in the 83rd, but Dzhanaev made the save.

Defensively minded Rostov has one point from three games in its Champions League debut campaign and rarely threatened to score against Atletico, barring a couple of late efforts easily dealt with by goalkeeper Jan Oblak.