Capsule collection for women on the go

Rhea Pradhan had been posting teasers of her collaborative collection with Metaphor since mid-January this year on her Instagram page. The collection, titled Metaphor x Peppy Owl, was released on Sunday, January 24, 2019 and Pradhan confesses it felt really nice to see the result of her hard work. Although she is excited about the launch of her first clothing collection, the blogger mentions that she ran into quite a few complications during the production process and that she has learnt many valuable lessons.

Here, she sat down with The Week’s Anweiti Upadhyay to talk about the collection and the effort she put in to come up with it.

What kind of concept is your collection based on?
The whole collection is made up of basic pieces that you can wear every day and that match well with any other articles of clothing you pair them with. There are about 20 different pieces in total and, believe me, there’s something for everyone. Because this is my first collection, I didn’t play around with the designs too much and wasn’t very experimental either. Also, the concept and the collection changed quite a bit since we first came up with the idea. This was supposed launch about three months ago and all of my initial designs were of clothes that fit into a winter wardrobe. Because we had some technical issues, I had to alter those pieces to suit the warmer weather.

How did this collaboration come about?
Metaphor has previously released similar collections with blogger Sanna Gurung who is a good friend of mine. Apparently, they asked her to recommend a few Nepali celebrities who she thinks can handle releasing their own collections and I was one of the people she recommended. The Metaphor team then contacted me for this collaboration deal around late October and we started working on it after that. I had always wished to release my own clothing line or collection. But I didn’t think that I would get a chance to do that so early in my career.

How involved were you in the production process?
Since the beginning of the project, both the Metaphor team and I have been equally involved. I have been going to their office to talk things through and confirm the details about one or two times every week since the project started. I created a Pinterest board, saving the designs I wanted to incorporate into my designs and the designs I was inspired by. I crafted all of the initial designs and I have looked into every product that was to be launched as a part of the Metaphor x Peppy Owl collection prior to its release. We have actually had to re-do a few pieces from scratch because we weren’t happy with how the product turned out.

You aren’t a student of fashion or a designer. So, how did you design the pieces for this collection?
I had to research a lot before I sat down to decide on the designs. I knew the basics about how ready-to-wear clothes were produced but I didn’t know the exact steps and measures that are taken during the production of clothes. The first time I met with the Metaphor team to show them my designs, I had picked a lot of designs and I was sure all of them would be approved of but we actually had to cancel out a lot of those designs. The Metaphor team guided me through a lot of things during this process but they also listened to what I wanted in the collection and so we built the collection together.

What kind of challenges did you come across while working on the collection?
The fabrics I had picked for the initial winter collection was something that we had problem finding. I didn’t know that a lot of the fabrics that are used in ready-to-wear collections aren’t actually produced in our country and are imported from overseas. We tried to look around for that particular fabric for a while but later decided that we should probably use a fabric that is easily accessible in case we need to produce more of these items in the future. We also had to change the pieces quite a bit because we weren’t happy with their fit as well as the final look. Additionally, I had to alter all the designs for them to be suitable for spring and summer because, by the time the collection launched, the weather wouldn’t be right to wear the clothes I had originally come up with.

How are the items priced and sized?
The prices of all these items are also something both the Metaphor team and I agreed on. Since this is my first time being involved in the clothing production process, I didn’t really know how to price them. The Metaphor team considered everything that went on behind the scenes and priced the items accordingly. I reviewed all the prices and after considering the production process and the effort put in by everyone involved, I think the prices are fair. They aren’t expensive and unreasonable. We actually had to cancel a few items like jackets and such that would take up a lot of production cost because we wanted to make this collection as affordable as possible.

Regarding the sizes, you can choose a size of most items in the collection from small to extra-large. In case none of the sizes fit you, Metaphor will actually produce a custom piece for you after taking your measurements, if you talk about it with them. I didn’t know about this myself before working with them but Metaphor is actually very flexible about creating custom pieces for their customers. Even if you want slight alterations in the design or fit of items, they will do it for you.

How have the feedback and reviews on the collection been so far?
I actually haven’t received feedback on this collection. It’s perhaps too early for that. Buyers have to try out the products to review them. I think a lot of them haven’t received and tried out the clothes yet. But I did find out a couple of days ago that a lot of people had been pre-ordering pieces (of items whose pictures had been released through Metaphor’s social media pages) prior to the official launch of the collection. Also, a few people had messaged me saying they were excited about this collection because they admire my fashion sense. I can only hope people like what they buy from this collection. I haven’t really been experimental with the designs in the collection because I wanted to release pieces that everyone could incorporate in their everyday looks. And, with this being my first collection, I wanted to stay on the safe side. 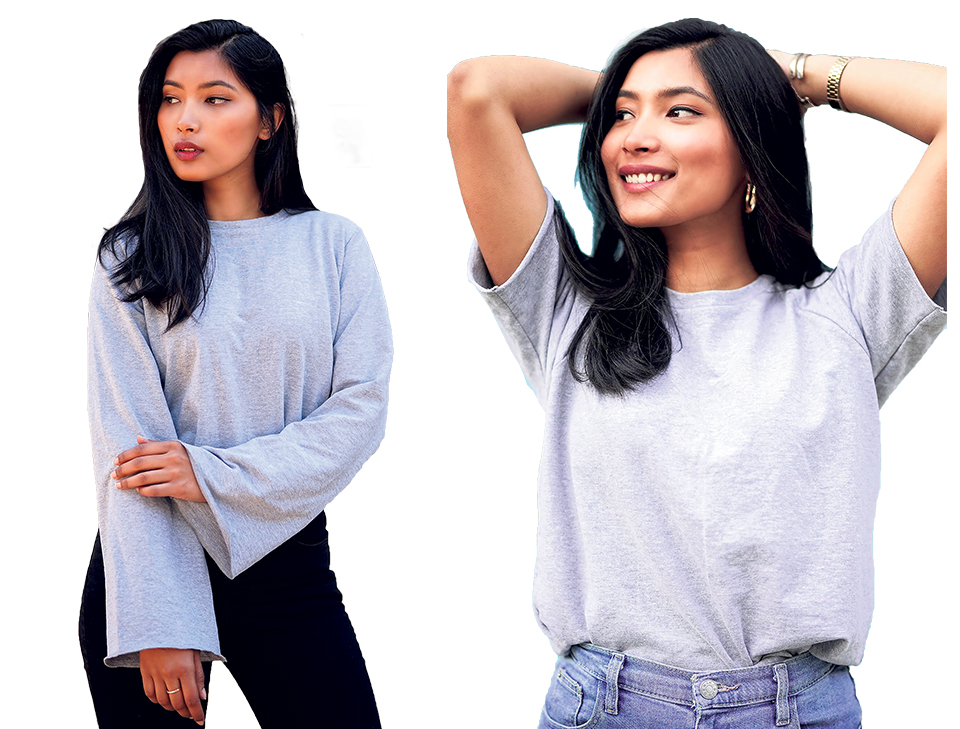 Both of these are light and casual pieces that you can lounge in. The t-shirt is inspired from men’s closet, according to Pradhan. It is loose and thus very comfortable. The crop top is a little more elaborate with its bell sleeves but just as versatile. The fit and silhouette of both of these pieces aren’t very specific so you can play around with styling them.

This piece is a bit more stylish while still being pretty casual. It’s a camisole top with a V-neckline, and A line sling design. It’s also double layered with minimal straps. Pradhan mentions that she crafted this design specifically for summer evenings but you can wear it whenever and however you wish.

Bodysuit is a summer must have. The one in Pradhan’s collection is a simple one that can be worn by itself or used as a layering basic. The velvet trousers come in different shades. They are loose, high-waisted, and take the wearer back to the 70s when they had just entered the fashion scene.

This mesh top is a good layering and styling piece that anyone can add to their wardrobe. It is round necked, full sleeved and basic with no added designs. You can wear it with your favorite bralets and sleeveless tops to stylishly tease a bit of your skin. This can also function as your go-to night out item.