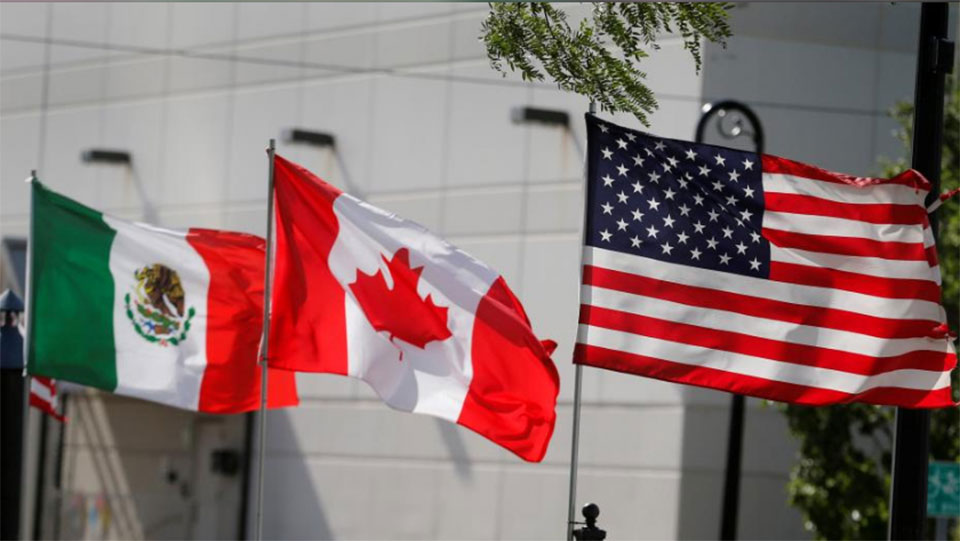 FILE PHOTO: Flags of the U.S., Canada and Mexico fly next to each other in Detroit, Michigan, U.S. August 29, 2018. REUTERS/Rebecca Cook/File Photo

OTTAWA/WASHINGTON, Oct 1: The United States and Canada reached a deal on Sunday to salvage NAFTA as a trilateral pact with Mexico, beating a midnight deadline with agreements to substantially boost American access to Canada’s dairy market and protect Canada from possible U.S. auto tariffs, sources with direct knowledge of the talks said.

President Donald Trump had threatened to splinter the nearly 25-year-old North American Free Trade Agreement into a bilateral pact with Mexico and tax Canadian vehicle exports to the United States if Ottawa had failed to sign on before a midnight Sunday deadline (0400 GMT Monday).

But Trump has approved the “framework” deal with Canada, a source familiar with the decision said, just days after he sharply criticized Canadian Prime Minister Justin Trudeau and his NAFTA negotiating team.

Trump blames NAFTA for the loss of American manufacturing jobs and wants major changes to the pact, which underpins $1.2 trillion in annual trade. Markets fear its demise would cause major economic disruption.

Negotiators from both sides spent two days talking by phone as they tried to settle a range of difficult issues such as access to Canada’s closed dairy market and U.S. tariffs.

The deal will preserve a trade dispute settlement mechanism that Canada fought hard to maintain to protect its lumber industry and other sectors from U.S. anti-dumping tariffs, Canadian sources said.

But this came at a cost.

Canada had agreed to provide U.S. dairy farmers access to about 3.5 percent of its approximately $16 billion annual domestic dairy market, the sources said, adding that the Canadian government is prepared to offer compensation to dairy farmers hurt by the deal.

The influential Dairy Farmers of Canada lobby group - which strongly opposes the idea - said in a statement that it insisted “any final NAFTA deal should have no further negative impact on the dairy sector.”

The quota would allow for significant growth in tariff-free automotive exports from Canada above current production levels of about 2 million units, safeguarding Canadian plants.

But the deal failed to resolve U.S. tariffs on Canada’s steel and aluminum exports, the Canadian sources said.

“We celebrate the trilateral agreement. The door is closed to the fragmentation of the region,” Jesus Seade, President-elect Andres Manuel Lopez Obrador’s NAFTA negotiator said on Twitter. “NAFTA 2 will give certainty and stability to Mexican trade with its partners in North America.”

The Canadian dollar and Mexican peso both rallied as word circulated that a trilateral deal had been hammered out. The loonie was up 0.60 percent versus the greenback while the peso gained 0.80 percent.[MKTS/GLOB]

U.S. stocks looked set to rally on the news. S&P 500 Index e-mini futures were up 0.6 percent, suggesting the benchmark index was on track to open the week back near record territory.

U.S. business groups opposed turning NAFTA into a bilateral deal because the three nations’ economies have become closely intertwined since the original pact came into force in 1994.

Officials have blown through several deadlines since the talks started in August 2017.

Seven South Asian film festivals in the U.S. and Canada have decided to merge their efforts into one online event... Read More...

KATHMANDU, June 20: After being appointed as the Minister for Culture, Tourism and Civil Aviation, Rabindra Adhikari has been often credited... Read More...

Fellow Nepalis, fear the government, fear as much for the country
14 hours ago
Govt concerned over Dehradun incident: Foreign Ministry
18 hours ago

2,508 people diagnosed with COVID-19 in Nepal on Saturday
11 hours ago