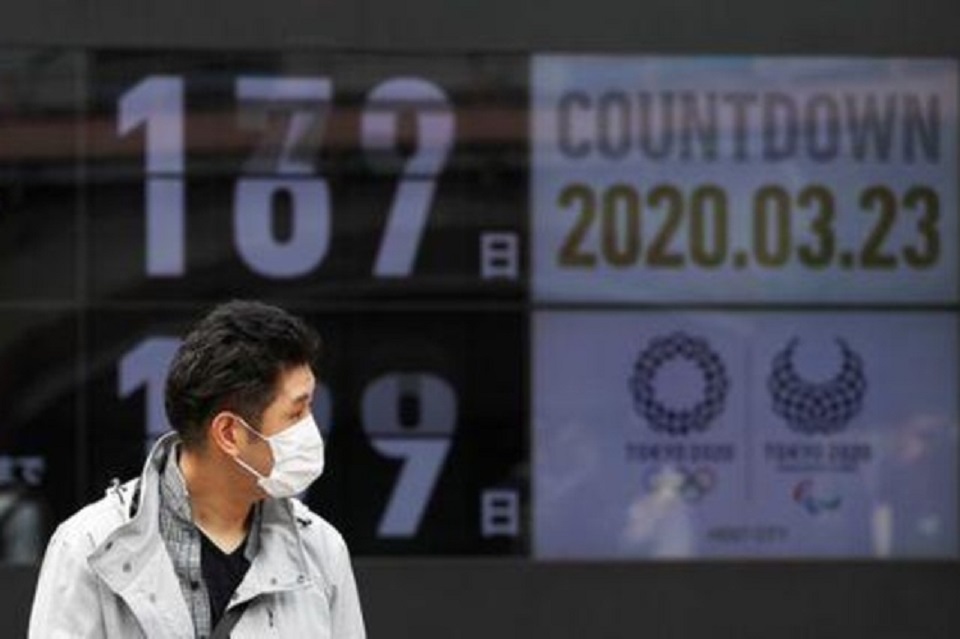 A passersby, wearing a face mask due to the outbreak of the coronavirus disease (COVID-19), walks past a screen counting down the days to the Tokyo 2020 Olympic Games in Tokyo, Japan March 23, 2020. REUTERS/Issei Kato

TORONTO/TOKYO, March 23: Canada and Australia said they would not be sending athletes to the Tokyo Olympics if the Games went ahead as scheduled this year as pressure on organisers to postpone because of the coronavirus pandemic reached fever pitch on Monday.

The International Olympic Committee (IOC) and Japanese government had on Sunday and Monday slightly shifted their position that the Games would start as planned on July 24, announcing a month-long consultation over other “scenarios”.

That was not sufficient for the Canadians or Australians, who said they would not be participating if the Games were not pushed back to 2021.

Canada’s Olympic Committee (COC) and Paralympic Committee (CPC) released a statement saying that while they recognised the complexities of a postponement, “nothing is more important than the health and safety of our athletes and the world community”.

Martin Richard, communications chief for the CPC, said the Canadians had been hoping for a decision on Sunday and decided to withdraw when none came.

“The world is facing a crisis and this is more important than any other sport event,” he told Reuters from Ottawa.

Richard said for Paralympic athletes, some of whom had underlying conditions, it would be risky to expose them if the virus was not contained.

“We felt it was unethical to have them be put in that position,” he said, adding that Canada had not been alone in applying pressure on the IOC to postpone.

More than 14,600 people have died globally since the coronavirus outbreak began and containment measures have severely hampered the ability of some athletes to prepare for the Games.

While many Canadian athletes and officials welcomed the COC’s move, some were not happy.

“I believe in the safety of our lives but this is premature,” Sage Watson, the reigning Pan American champion in the 400 metres hurdles, tweeted.

Soon after the Canadian statement, the Australian Olympic Committee (AOC) said it had told its athletes to prepare for a Tokyo Games taking place in 2021.

“The AOC (Executive Board) unanimously agreed that an Australian team could not be assembled in the changing circumstances at home and abroad,” read the statement.

“The AOC believes our athletes now need to prioritise their own health and of those around them, and to be able to return to the families, in discussion with their national federations.”

The announcements followed a weekend in which major stakeholders such as U.S. Track and Field and UK Athletics, along with some national Olympic committees, had called for a delay because of the pandemic.

The IOC responded on Sunday with a statement that promised discussions in the next four weeks over scenarios that would include an option of putting back the July start date, or even moving the Games back by a year or more.

Japanese Prime Minister Shinzo Abe followed suit early on Monday by telling parliament that postponement may be considered if holding the Games in its “complete form” became impossible.

“If that becomes difficult, we may have no option but to consider postponing the Games, given the Olympic principle of putting the health of athletes first,” he said.

Abe also said calling off the Games entirely was not an option, echoing the IOC position in its statement that cancellation “was not on the agenda”.

Tokyo 2020 Olympics chief Yoshiro Mori later echoed the same sentiments and admitted he was becoming frustrated by some of the criticism of organisers.

“I’m not so foolish as to assume that athletes and everyone else involved in the Olympics would come to Tokyo amid the global coronavirus crisis, even if we were to push forward with holding it as planned,” he told reporters on Monday.

The Olympic torch relay – due to start on Thursday – would go ahead as planned for now, even though that schedule was also open to change, organising committee CEO Toshiro Muto said at the same news conference.

The U.S. Olympic and Paralympic Committee (USOPC), who said they would not be commenting on Canada’s decision on Sunday, had earlier welcomed the IOC’s new position but said more clarity was needed to remove “enormous ambiguity” for athletes.

The Olympics have never been postponed or cancelled during peacetime but the IOC’s decision to consider postponement was met with relief from several other major stakeholders, including World Athletics, the International Paralympic Committee (IPC) and major national Olympic committees.

Canada’s boycott will only add to the pressure for a quick decision, however.

“We welcome the IOC Executive Board decision to review the options in respect of a postponement of the Tokyo 2020 Olympic Games,” British Olympic Association chairman Hugh Robertson said on Sunday.

“However, we urge rapid decision-making for the sake of athletes who still face significant uncertainty.”

The last major boycott of the Olympics was when the Soviet bloc stayed away from the 1984 Los Angeles Games, although North Korea and Cuba skipped the 1988 Seoul Olympics.

KATHMANDU, August 10: When the National Examinations Board (NEB) postponed the Grade 12 examination without giving any alternative, a great... Read More...

ATHENS/TOKYO, March 24:  A final decision whether to postpone the Tokyo Olympics because of the coronavirus pandemic will be taken in... Read More...

KATHMANDU, Sept 7: The Ministry of Foreign Affairs (MoFA) has refuted a news report that came in various national and... Read More...