CAN gears up for election for new leadership 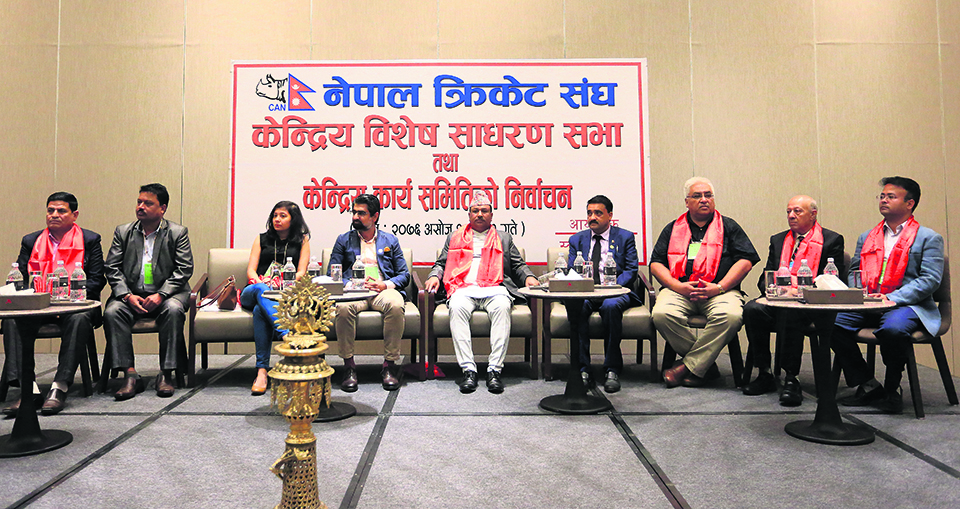 KATHMANDU, Sept 28: The Special General Assembly of suspended Cricket Association of Nepal (CAN) and the election process to elect new leadership of the CAN was inaugurated in Kathmandu on Friday.

As the election is scheduled for Saturday, both the panels have announced candidates from their respective teams for key posts.

Sports Minister Bishwakarma while addressing the inaugural function urged one and all to work together and give up any vested interests for the betterment of the sports sector in the country.
“The Ministry of Sports has full support for fair and healthy election. Whichever group comes in the new leadership, that should make winning more gold medals in the upcoming South Asian Games (SAG) its priority. It will help for the development of the sports in the country,” he said.

NSC Member Secretary Silwal also asked all those involved in election to compete for the posts in a healthy and professional way. He urged all the stakeholders to work for the revival of CAN, which has been suspended by the ICC, citing government interference in its internal affairs.

The CAN statute has made it mandatory to include a member each from seven provinces in the central working committee. All the members are set to be elected through votes by 59 representatives. The new body of CAN will consist of 17 members including a president, vice-president and general secretary.

The new leadership will be elected for four years whereas it is expected that ICC will reinstate CAN after the international body’s meeting scheduled for October 13.

Final results for the presidency of new governing body and members of central working committee are scheduled to be announced on Saturday.