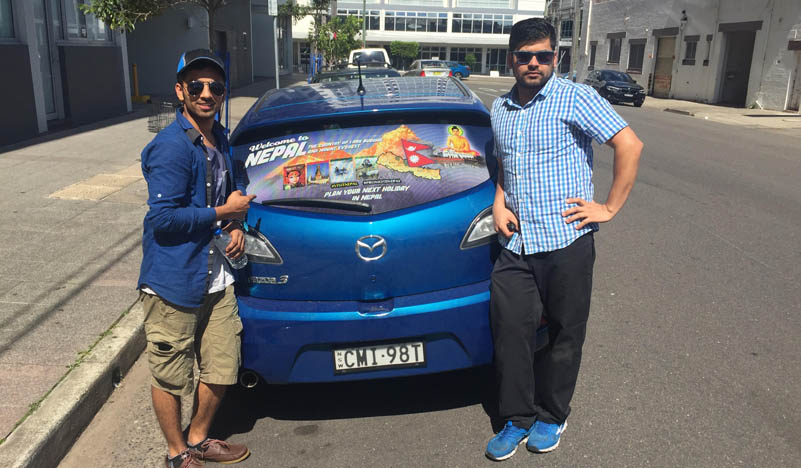 BAGLUNG, Dec 27: Nepalis residing in Australia have started a campaign to promote Nepal in Australia.

Dozens of youths residing in Sydney, associated with Jai Nepal Group and Youth Forum Australia, started the campaign. They have started the campaign by sticking tourism promotional stickers on their private vehicles. The stickers carry messages like ‘Welcome to Nepal, the country of Buddha and Mount Everest’, ‘Plan your next holiday to Nepal’. The stickers also bear pictures of Buddha, Kumari, Mount Everest, one-horned rhino and rafting, among others.

Vishnu Sapkota, president of the Jai Nepal Group, said that the campaign has been started to promote Nepal in Australia and encourage more Australians to visit Nepal. “We believe that this campaign will introduce Nepali tourism products and services in the Australian tourism market,” he added.

In the first phase of the campaign, private vehicles bearing such stickers will be driven across major thoroughfares of Sydney on January 7. The sticker was provided to youths by HS Creation at a discounted rate of $130, according to Sagar Adhikari, one of the members of the campaign.

“In the second phase of the campaign, we will put posters with ‘Go, Visit Nepal’ message on 10 public vehicles,” Richa Baskota said, adding that they would organized a charity program to raise 14,000 Australian dollars required for the project.

Jai Nepal Group has been actively helping in construction of schools in Baglung which was destroyed by the earthquake.