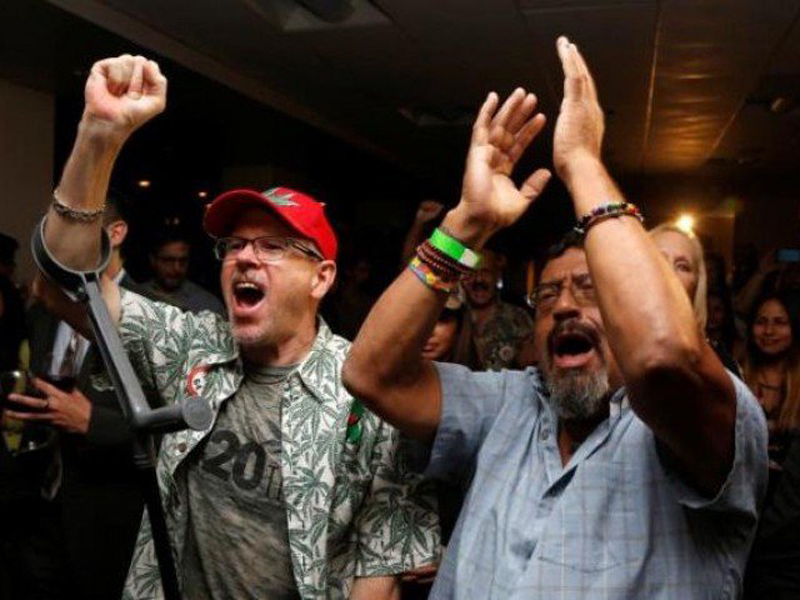 CALIFIORNIA, Nov 9: A ballot measure to make recreational marijuana legal for adults was headed for approval in California, opening the most populous US state to a burgeoning commercial cannabis market in a major victory for supporters of liberalized drug laws.

Proposition 64 appeared headed for decisive passage as statewide returns in Tuesday’s election showed nearly 56 per cent of voters favouring the measure and 44 per cent opposed, according to results reported from well over half of all precincts.

California was by far the largest of five states with ballot measures seeking to legalize the use of marijuana for the sheer pleasure of its intoxicating effects, and approval there would extend legalization to the entire US Pacific Coast. Recreational marijuana was first approved in 2012 by Washington state and Colorado, and later by voters in Oregon, Alaska and the District of Columbia. The victory also was declared on Tuesday by supporters of a similar measure in Massachusetts, giving legalized recreational pot its first toehold in New England.

The Marijuana Policy Project, the nation’s leading organization supporting liberalization of cannabis laws, likewise projected passage of measures permitting medical use of marijuana in Florida, Arkansas and North Dakota. The outcome was less certain for recreational marijuana initiatives in Maine, Arizona and Nevada, and for a medical cannabis measure in Montana.

Before Tuesday, 25 states had already legalized cannabis in some way, whether for medical or recreational uses, or both.  Approval Tuesday in California alone, home to 39 million people, would put nearly a fifth of all Americans in states where recreational marijuana is legal, according to US Census figures.

California was the first US state to legalize medical marijuana, doing so in 1996.

The new measure, spearheaded by a coalition of supporters that included Democratic Lieutenant Governor Gavin Newsom and billionaire high-tech entrepreneur Sean Parker, allows adults to possess and use up to an ounce of pot for private, recreational use. It also permits personal cultivation of as many as six cannabis plants.

Moreover, it would establish a system to license, regulate and tax sales of marijuana, while allowing city governments to exercise local control over commercial distribution within their borders.

California voters defeated a similar initiative in 2010, but public opinion polls show attitudes have since shifted. Opponents of liberalized marijuana laws have argued that such measures carry major public safety risks and would make pot more accessible to youngsters.

Experts say the latest initiatives include more sophisticated regulatory mechanisms aimed at keeping cannabis away from children and banning the involvement of criminal gangs and drug cartels.

They also point to the potential for hundreds of millions in additional state tax revenue from pot sales and billions in economic activity. Investors new to the sector said they are eager for a piece of a recreational marijuana market that by some estimates will reach $50 billion over the next decade.

“It’s changed in the minds of these voters from being like cocaine to being like beer,” said University of Southern California political scientist John Matsusaka.

Civil rights groups have also embraced legalization, arguing that current marijuana laws have led to a disproportionate number of minorities being incarcerated for minor drug offences.

Legalization by even a few of the states where measures are on the ballot could prod the federal government, which still classifies marijuana in the same category as heroin, to begin rethinking its laws and policies, Matsusaka said.