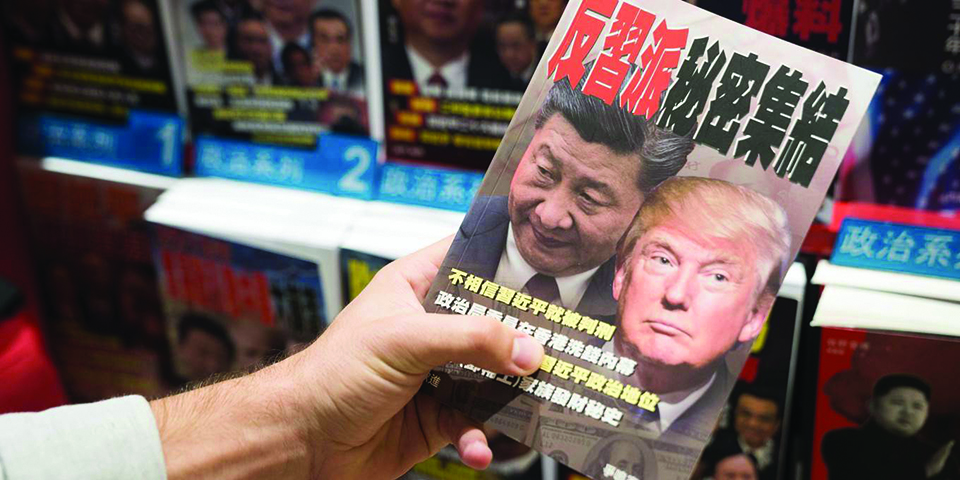 CAMBRIDGE – On a visit to Beijing in October, I was often asked whether US Vice President Mike Pence’s recent harsh criticism of China marked the declaration of a new cold war. I replied that the United States and China have entered a new phase in their relationship, but that the cold war metaphor is misleading.

During the Cold War, the US and the Soviet Union targeted tens of thousands of nuclear weapons at each other and had virtually no trade or cultural ties. By contrast, China has a more limited nuclear force, annual Sino-American trade totals a half-trillion dollars, and more than 350,000 Chinese students and three million tourists are in the US each year. A better description of today’s bilateral relationship is “cooperative rivalry.”

Since the end of World War II, US-China relations have gone through three phases that lasted roughly two decades each. Hostility marked the 20 years after the Korean War, followed by limited cooperation against the Soviet Union during the phase that followed President Richard Nixon’s famous 1972 visit.

The Cold War’s end ushered in a third phase of economic engagement, with the US helping China’s global economic integration, including its entry into the World Trade Organization in 2001. Yet in the first post-Cold War decade, President Bill Clinton’s administration hedged its bets by simultaneously strengthening the US-Japan alliance and improving relations with India. Now, since 2017, the US National Security Strategy focuses on great power rivalry, with China and Russia designated as America’s main adversaries.

While many Chinese analysts blame this fourth phase on US President Donald Trump, Chinese President Xi Jinping is also to blame. By rejecting Deng Xiaoping’s prudent policy of maintaining a low international profile; by ending presidential term limits; and by proclaiming his nationalistic “China Dream,” Xi might as well have been wearing a red hat reading, “Make China Great Again.” The conventional wisdom on China within the US had already begun to sour before the 2016 presidential election. Trump’s rhetoric and tariffs were merely gasoline poured on a smoldering fire.

The liberal international order helped China sustain rapid economic growth and reduce poverty dramatically. But China also tilted the trade field to its advantage by subsidizing state-owned enterprises, engaging in commercial espionage, and requiring foreign firms to transfer their intellectual property to domestic “partners.” While most economists argue that Trump is mistaken to focus on the bilateral trade deficit, many support his complaints about China’s efforts to challenge America’s technological advantage.

Moreover, China’s growing military strength adds a security dimension to the bilateral relationship. While this fourth phase of the relationship is not a cold war, owing to the high degree of interdependence, it is much more than a typical trade dispute like, say, America’s recent clash with Canada over access to that country’s dairy market.

Some analysts believe this fourth phase marks the beginning of a conflict in which an established hegemon goes to war with a rising challenger. In his explanation of the Peloponnesian War, Thucydides famously argued that it was caused by Sparta’s fear of a rising Athens.

These analysts believe that China’s rise will create a similar fear in the US, and use the analogy of World War I, when a rising Germany set hegemonic Britain on edge. The causes of World War I, however, were far more complex, and included growing Russian power, which created fear in Germany; rising nationalism in the Balkans and other countries; and the risks deliberately taken by the Habsburg Empire to stave off its decline.

Even more important, Germany had already surpassed Britain in industrial production by 1900, while China’s GDP (measured in dollars) currently is only three-fifths the size of the US economy. The US has more time and assets to manage the rise of Chinese power than Britain had with Germany. China is constrained by a natural balance of power in Asia in which Japan (the world’s third-largest economy) and India (about to surpass China in population) have no desire to be dominated by it.

Succumbing to the fear that Thucydides described would be an unnecessary self-fulfilling prophecy for the US. Fortunately, polls show that the American public has not yet succumbed to a hysterical portrayal of China as an enemy as strong as the Soviet Union was during the Cold War.

Neither China nor the US poses an existential threat to the other the way that Hitler’s Germany or Stalin’s Soviet Union did. China is not about to invade the US, and it is unable to expel America from the Western Pacific, where most countries welcome its presence. Japan, a major part of the so-called first island chain, pays nearly three-quarters of the host nation costs to keep 50,000 US troops based there.

My recent visit to Tokyo confirmed for me that the alliance with the US is strong. If the Trump administration maintains it, the prospects are slight that China can drive the US from the Western Pacific, much less dominate the world. The US holds better strategic cards and need not succumb to Thucydidean fear.

There is another dimension, however, that makes this fourth phase a “cooperative rivalry” rather than a Cold War. China and the US face transnational challenges that are impossible to resolve without the other. Climate change and rising sea levels obey the laws of physics, not politics. As borders become more porous to everything from illicit drugs to infectious diseases to terrorism, the largest economies will have to cooperate to cope with these threats.

Some aspects of the relationship will involve a positive-sum game. US national security will require power with China, not just over China. The key question is whether the US is capable of thinking in terms of a “cooperative rivalry.” Can we walk and chew gum at the same time? In an age of populist nationalism, it is much easier for politicians to create fear about a new cold war.

Joseph S Nye is a professor at Harvard and author of Is the American Century Over?

IN PHOTOS: People exchanging old banknotes with new ones at NRB
14 hours ago