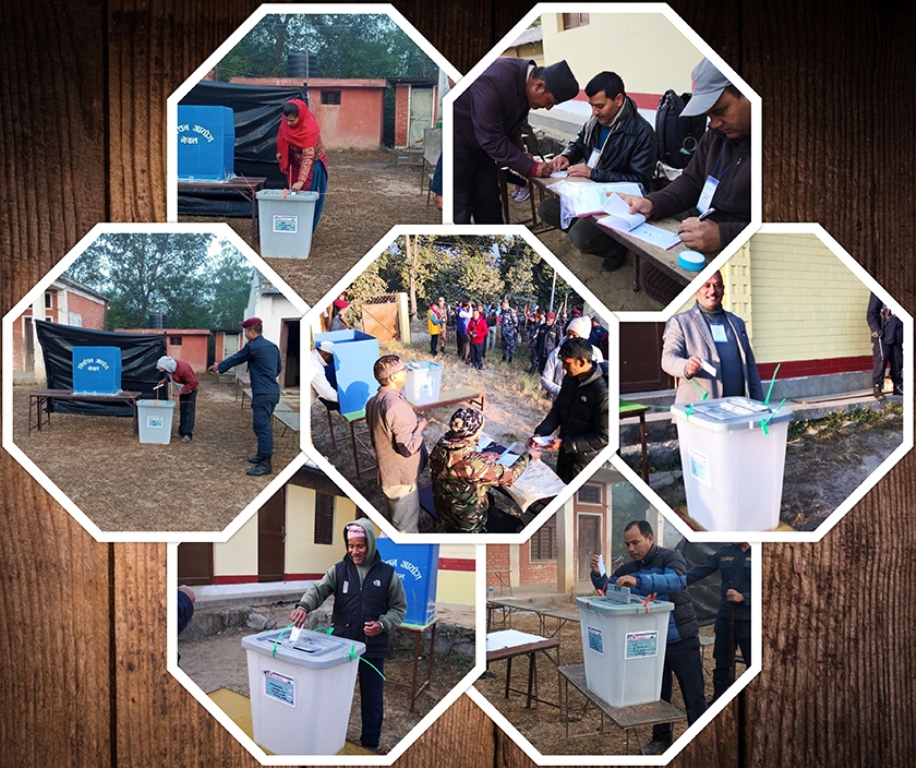 KATHMANDU, Nov 30: The voting for by-election to elect people's representatives in various 52 vacant posts began at 7:00 am today morning.

Chief Election Commissioner Dinesh Kumar Thapaliya has appealed all the voters to exercise their rights without any fear because reliable security arrangement has put in place.

An integrated security arrangement with strong coordination among all security agencies has been ensured to hold election in free and fair atmosphere. A total of 337 candidates including 21 for the post of House of Representatives member, 43 for State Assembly member and 273 for various positions at the local level are in the fray with 454,114 voters eligible to vote in the by-election.

Voting is taking place from 7:00 am to 5:00 pm in 246 voting centres with 537 polling booths in 37 districts of the country, according to Election Commission. The EC has directed all voting officers to make appropriate arrangement of voting to the persons with disability, pregnant, senior citizens and sick voters.

The voting is being held for a member of the House of Representatives in Kaski constituency-2, while for State Assembly members in Bhaktapur, Baglung and Dang. Similarly, the election is also for the mayor at Dharan Sub-Metropolitan City.

Meanwhile, Chief Election Commissioner Thapaliya observed the voting that is taking place at Duwakot polling centre in ward no.2 of Changunarayan municipality, Bhaktapur.

On the occasion, Chief Returning Officer Jagat Narayan Pradhan apprised CEC Thapaliya of the preparations made for the by-election. Heads of Diplomatic missions based in Kathmandu are also here to observe the by-election.

KATHMANDU, Dec 1: The election results under the by-election for the post of Ward Chair of 39 local levels have... Read More...

A dream come true for a Nepali sound designer and mixer
3 hours ago
Four killed, 10 hospitalized in forest fires in eastern Ukraine
11 minutes ago
Former finance minister Khatiwada appointed as Nepal’s envoy to the US
1 hour ago