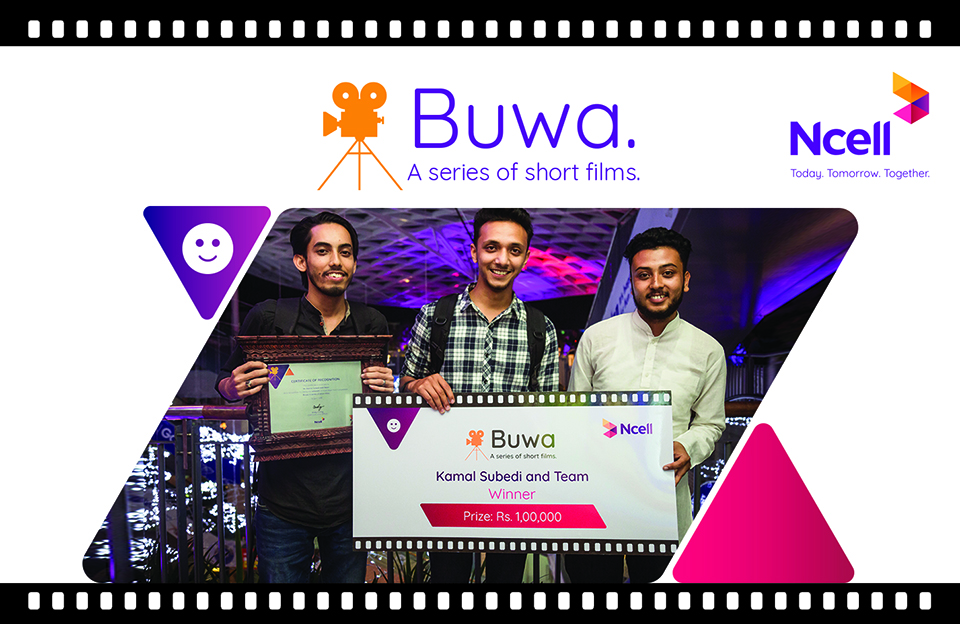 KATHMANDU, Aug 30: 'Buwa', a short film by Kamal Subedi and his team has won the first prize at the Ncell Short Film Competition organized by Ncell Pvt Ltd with the theme Buwa, a series of short films on its social media platform.

On the occasion of Father's Day, Ncell had launched the competition in the first week of August. “The main aim of this competition was to promote the budding young talents in film making. With over 70 entries from all over Nepal, it was no easy task for the panel of judges to select the 10 best films and winners,” said Ncell in its statement on Thursday. “There were founder of QFX Cinema and producer Nakim Uddin, film maker Asif Shah and journalist Bidhya Chapagain in the panel of judges.”

According to the telecommunication company, winning the first prize 'Buwa' by Kamal Subedi and his team bagged a purse of Rs 100,000 cash prize and 10 GB data for free to three crew members of the group each month for 12 months.

'The End of Culture' a film by Bishal Neupane and his team was declared the first runner-up. It bagged a cash prize of Rs 75,000 and 10 GB data for free to three team members each month for 12 months. The Next Level Production's 'Old Age Home' won the second runner-up prize carrying a purse of Rs 50,000 and 10 GB data to three members of the team for free each month for 12 months.

Raja Maharjan's 'Buwa' and a short film by Rising Star Nepal 'Dad, Son and Laptop' each won consolation prizes which include Rs 25,000 in cash prize and 10 GB data for free to three team members each month for a period of 12 months.

The top 10 short movies were screened amid a premiere show at QFX Cinemas, Labim Mall, Pulchowk on Wednesday and were attended by artists, celebrities, veteran figures from the Nepali film industry, partners and press, according to the statement.

“The entries and selected films highlighted the creativity and unique skills in storytelling by displaying the relationship with one's father. Ncell will release the top 10 films throughout the day on Father's Day on social media platforms,” it said.

KATHMANDU, Feb 22: An explosive went off in front of Ncell office at Bhaisepati on Friday evening. However, nobody has claimed... Read More...