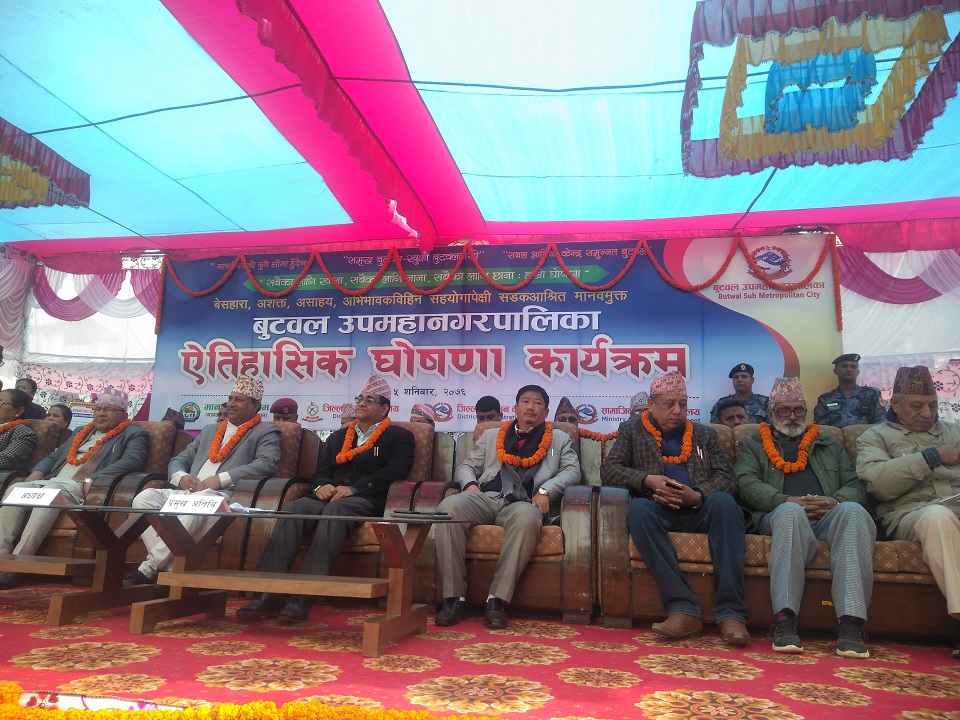 RUPANDEHI, Dec 21: With a commitment to providing support to helpless, homeless, orphan and street-people, Butwal sub-metropolitan city has been declared a street people free city on Saturday.

Launching a campaign ‘Food, clothes and shelter for all, our commitment’, declaration of street-people free Butwal was made amid a special ceremony.

The declaration was made as the initial stage of the ambitious plan to make the temporary capital of Province 5 without street people in coordination with Manab Sewa Ashram.

The Mayor of the sub-metropolis Shiva Raj Subedi announced that no people would be left helpless in the streets of Butwal. On the occasion, he also administered an oath to all present at the program to co-operate the sub-metropolis and Manab Sewa Ashram to make the campaign a success. Earlier, a cultural rally went round Butwal city and gathered at the municipal office for the event. Ministers of the provincial government, provincial lawmakers, chief of District Coordination Committee, representatives of District Police Office and people’s representatives of different local levels were present during the occasion.

Addressing the program, Province 5 Minister for Internal Affairs Kul Prasad KC lauded the initiative of Butwal sub-metropolis. “Municipal office has conveyed the message that the state protects people’s right to life,” KC added. He also committed to making the province street-people free zone in the days to follow.

Likewise, Minister for Industry, Tourism, Forest and Environment Lila Giri and Minister for Social Development Sudarshan Baral also committed to launching the campaign throughout the province.

Ashram will look after all the street people.

Protest erupts in Butwal against splitting of Province 5

BUTWAL: Protest has erupted here after the government registered the constitution amendment proposal to split the Province 5. ... Read More...