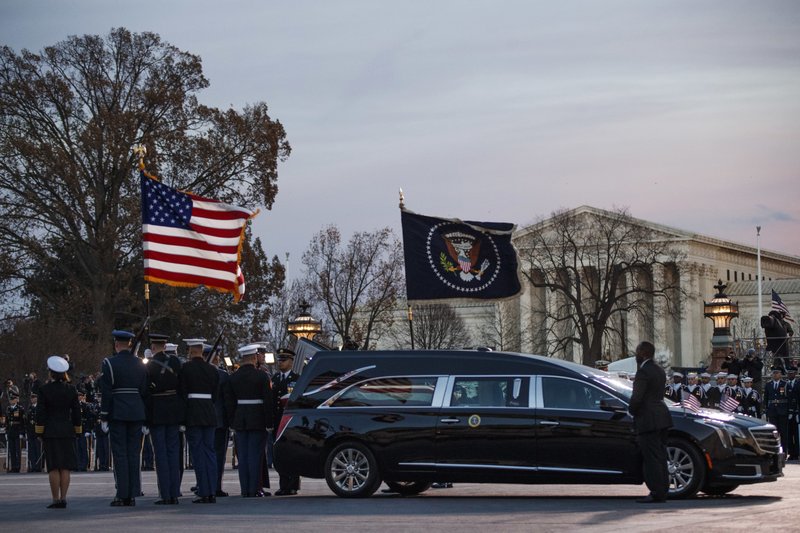 A joint services military honor guard removes the casket of former President George H.W. Bush from the hearse to carry it into the rotunda of the U.S. Capitol in Washington to lie in state, Monday, Dec. 3, 2018. / Associated Presse

WASHINGTON, Dec 4: Former President George H.W. Bush’s state funeral encompasses four days of events, from his arrival in Washington to his burial in Texas on Thursday.

The guidelines for state funerals date back to the mid-1800s and have been shaped over time. Seating arrangements, for example, are detailed with precision, with the presidential party followed by chiefs of state, arranged alphabetically by the English spelling of their countries.

Ronald Reagan’s state funeral in 2004 was the first of its kind since Lyndon Johnson died in 1973. Gerald Ford’s state funeral overlapped the end of 2006 and the beginning of 2007.

The president, former presidents and a president-elect are all entitled to a state funeral, but the family decides if they actually get one or just how involved it will be. Richard Nixon’s family, acting on his wishes, opted out of the Washington traditions when he died in 1994, his presidency shortened and forever tainted by Watergate.

The rules and what actually happens are based on what has come before.

John F. Kennedy’s services were modeled after those of Abraham Lincoln, at the request of his widow, Jacqueline, in her first public statement after the assassination. Historians examined musty documents by flashlight in the middle of the night as the stunned country waited for a plan — the Library of Congress’ automatic lights could not be rigged to come on after hours.

Bush is the 12th president to lie in state in the Capitol Rotunda. Like many presidents, Bush and Ford served in Congress. Reagan did not.

Eight presidents have had funeral processions down Pennsylvania Avenue, including all four presidents to die by assassination — Lincoln, James Garfield, William McKinley and Kennedy. Bush decided his state funeral would not include a formal procession through downtown Washington.

Two presidents are buried at Arlington National Cemetery: Kennedy and William Howard Taft. Bush will be buried at his presidential library in College Station, Texas, near his wife, Barbara, who died in April, and their daughter Robin, who died of leukemia at age 3.

The Capitol has a more expansive policy for lying in state. Congressman Henry Clay, in 1852, was the first to lie in the Capitol Rotunda. FBI Director J. Edgar Hoover lay in the Capitol in 1972. Police officers killed in 1998 while protecting the Capitol also lay in state there. Sen. John McCain lay in state after his death earlier this year.

The first presidential state funeral was for William Henry Harrison, who in 1841 became the first president to die in office, just 30 days after his inauguration. Alexander Hunter, a Washington merchant, was tasked with putting on a first-of-its-kind American ceremony. He draped the White House in black. Official buildings and many private households followed suit, starting a now-lost tradition that was repeated at Lincoln’s funeral 25 years later.

We urge India to accept the truth: FM Gyawali
20 hours ago

With 72 new cases, Nepal’s COVID-19 tally spikes to 675
6 hours ago
Nepali Congress stands for suspension of funds to parliamentarians
7 hours ago
Patient dies at COVID-19 ward of Bharatpur Hospital, swab samples collected for test
7 hours ago