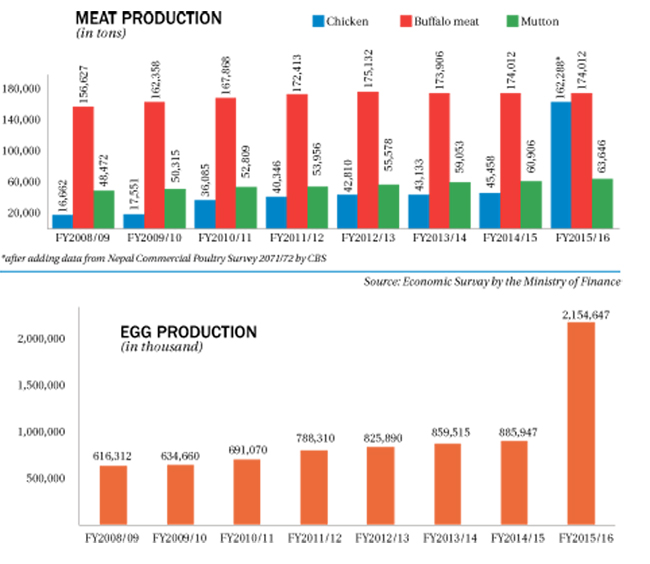 The data suggests that consumption is also in the similar trend as the there is no formal export of chicken and buff.

Economic Survey shows that the country produces 174,099 tons of buff annually. The figure is almost constant over the past decade as there is not sizable commercial production, officials say.

Government officials acknowledge that statistics of chicken in previous years was not scientific. “The Economic Survey did not specifically cover commercial production,” Pradeep Chandra Bhattarai, information officer of Ministry of Livestock Development, said.

Narayan Hari Khatri, chairman of Nepal Feed Industries Association, said even the Nepal Commercial Poultry Survey 2071/72 has overlooked around 15 percent of farms across the country. “Our assumption is that chicken is the most consumed meat in the country. Conservative estimate shows that around 5,000 tons of chicken is consumed in the country every week," added Khatri.

A rough calculation based on production shows per capital consumption is 5.73 kg.

According to Nepal Commercial Poultry Survey, the country produces 1.22 billion eggs annually. However, the Economic Survey puts the figure at 934.67 million per year.

Poultry farmers claim that the country is becoming self-sufficient on poultry products.

Mutton is the third most consumed meat in the country after buff and chicken. The country produced 63,646 tons of mutton in the last fiscal year.

“Lack of proper data does not mean that the government has not realized the contribution of poultry sector. We have introduced number of programs and policy preferences for this sector," added Bhattarai.

Ministry of Livestock Development has planned to focus on specific data collection of major livestock. However, only Rs 10 million has been allotted for the purpose in this fiscal year. Also, the ministry is yet to work out details of such specific surveys.

People who eat meat 'have more sex than vegetarians'

A new survey has suggested that meat eaters are having more sex. ... Read More...