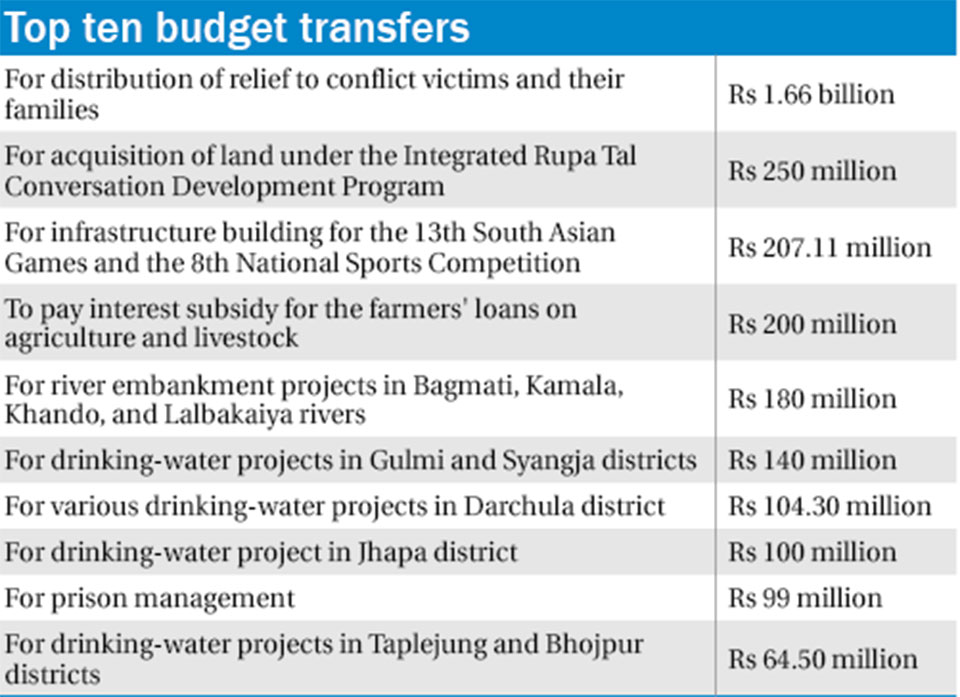 BIRGUNJ, April 30: An ambitious town development project of Birgunj has been severely hit due to lack of budget. With the development works of the ‘Secondary Town Integrated Urban Environmental Improvement Project (STIUEIP) left midway citing budget crunch, the city is disarray and dust has blanketed roadside settlements. Locals are worried of the fast approaching monsoon.

“Our locality has become more vulnerable. Now, the area will be filthy and damp in the monsoon. They dug earth for road widening but that’s left open and it is risky,” said Pannalal Gupta, a local of Birgunj.

People of Adarshanagar and around are extremely worried. Every rainy season, their houses, roads and corridors get submerged by sewage. Despite consistent calls for solution to the problem, the locals have not been relieved. This time, they are concerned over additional problem. When the roads were not dug and holes exposed, it was much better. Now, the condition is worst, they say. The project implementation office of Birgunj Sub-metropolitan City stated the lack of budget as the reason behind the sluggish development of the project.

The roads with multiple potholes, both big and small, have seriously challenged road safety, admits Shailedra Shrestha, chief of the Engineer and Planning Implementation Office.  He put the blame on lack of budget. “We could not pay the contractors on time. How would they work? We cannot force them to work,” he said. “They say they have not been able to pay even the fuel charges since long,” he added.

Gupta meanwhile lamented that thousands of Birgunj locals are going to suffer a lot if the situation is not improved before the monsoon. He urged the concerned authorities to intervene.

“It’s done for new infrastructure. But in name of establishing new structure, how can all this be left in such a pathetic state? How will they fix all those places which they have dug for road construction before the monsoon?” he wondered.

In Adarshanagar, some of the main roads have been out of use due to the ongoing road widening project. Somewhere, the roads are already very muddy while at other places, dust has clouded the city. “In one hand, the environmental and health issues are there and on the other hand so many vehicles have been diverted causing the new routes to wear down,” Gupta noted.

Under the project, the main roads were set to be linked with all village areas of Parsa district. People were excited about it, said Gupta. He added that they now feel that the project might not be completed even in a decade.

Thakur Dhakal, a project manager related to the developmental work admits that the lack of budget has delayed the work. “The budget has not been released. Everything is going slow. It is going to take time,” he said. He informed that construction of roads, canals and plantation are part of the project.

Asian Development Bank has supported 81 percent grant for the STIUEIP.  Rest of the budget has to be met by the Town Development Fund and the city where the project will be implemented. Millions of rupees have already been spent for the project carried out at different places. However, delay has caused problems everywhere.

Dhakal stated that progress on the project won’t be possible until the contractors are paid. Several parties are liable to issue payment, he said.

According to a consultant with the project, Bhupendra Man Shakya, the matter would be solved soon. “We have been working on this. The finance ministry has managed it,” he claimed. “Once the budget is released all the works which have been left midway would resume. Hope things will gain pace now,” he added.

The garbage management center in Birgunj has also been affected in lack of budget. According to Sumit Rauniyar, representative of a company that has undertaken the task of developing the center, lack of budget has hit their task too. “They have not released the payment so work has been stopped. This is very disturbing,” he said. He added that the company was doing 30 percent of work on its own but the payment for it has not been issued yet. “We were investing on our own with intention of finishing the work before the deadline. However, as they did not issue the payment, the work has been delayed,” he added.

Over 30% of development budget spent in 12th month

KATHMANDU, July 18: The government has spent 30 percent of the development budget in the final month of the last fiscal... Read More...

With less than a month left in fiscal year, 62% development budget still unspent

KATHMANDU, June 17: The government’s capacity to spend the development budget remained weak in the first 11 months of the current... Read More...