Buddhakrishna piercing his tongue for the seventh time 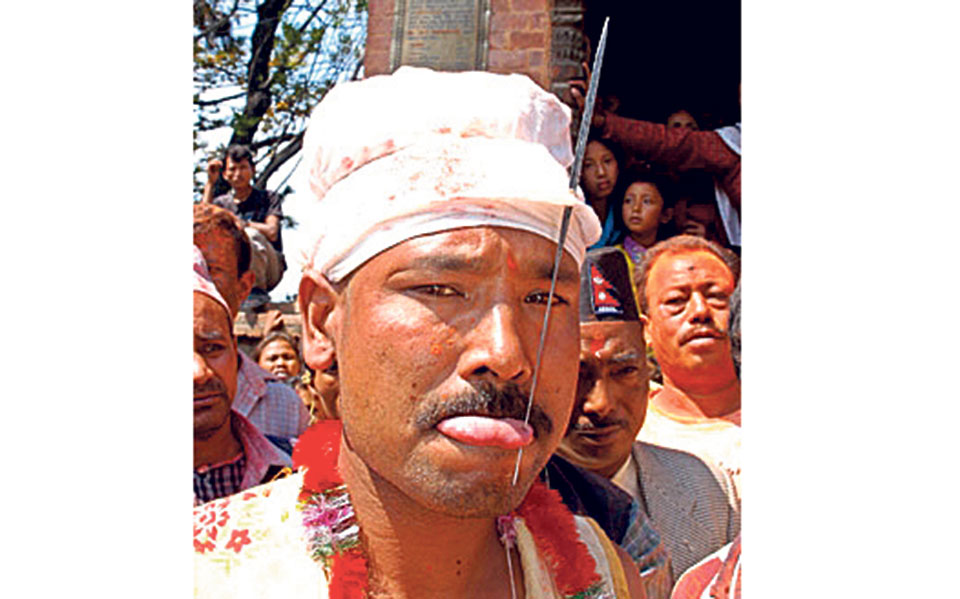 BHAKTAPUR, April 13: Every year on April 15, people in Bode, Madhyapur Thimi Municipality-8, celebrate the tongue-piercing festival with grace. As in the previous years, Buddhakrishna Bag Shrestha, 47, of the locality will be piercing his tongue with a metal skewer this year too to keep the tradition alive. He is the chairperson of the Ambulance Drivers Association, Bhaktapur, and an ambulance driver for Nepal Korea Friendship Hospital.

Buddhakrishna for the first time pierced his tongue for the festival in 2005 and did so for three more consecutive years until 2008. However, after a gap of such a long time, Buddhakrishna has decided to pierce his tongue once again this year. According to him, in the modern days, the Tongue Piercing festival is celebrated only in Bode of Bhaktapur. "This tradition is in the dire need of protection as no one from the new generation seems interested in continuing this tradition," laments Buddhakrishna.

He is worried that if people keep neglecting culture, there will be no one to hand over the responsibility to. Anyone from the Bode community can pierce their tongue for the festival but no one seems to be interested.

Earlier, those piercing their tongues had to organize a feast for their relatives. Budhhakrishna informed Republica that the municipality however has made an announcement to provide a budget of Rs 100,000 for the celebration of the festival from this year. Buddhakrishna adopts some preventive measures before piercing his tongue. He stops eating food, two days before the festival and relies just on water.

"If we don't eat food for two days, our tongue becomes numb. This reduces the pain while piercing the tongue," he said. On the main day, around one feet long metal skewer,   kept drowned in mustard oil for a month is used for piercing the tongue of the respective person. Other participants reach his home while playing traditional musical instruments. Buddhakrishna dressed up in traditional clothes and jewels will roam around the Bode community.

Even though there is no exact details of those who pierced their tongues for this festival so far, according to the locals, Harka Nar Singh pierced his tongue for 22 times, Bekha Narayaan Haya did so for 32 years, Haridev Kila Shrestha did it once. Similarly, Haribhasik Shrestha did it three times, Indrabata Shrestha took on the responsibility twice and Harkeshwar Shrestha did it thrice.