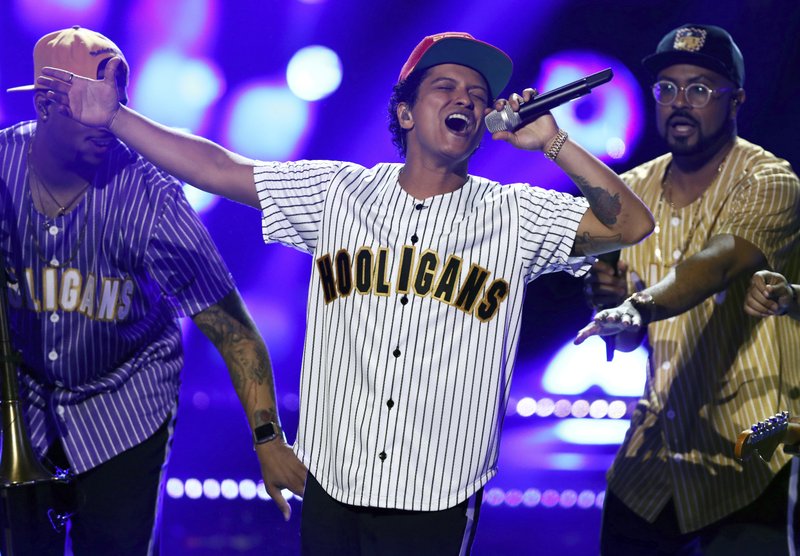 Bruno Mars wasn’t at the American Music Awards on Sunday night, but he was the big winner with seven awards, including entertainer of the year. Mars also won video of the year and favorite male artist, pop/rock, and favorite album, pop/rock.

“I wish I could be partying with y’all,” said Mars, who appeared in a video.

Former President Barack Obama and his wife Michelle Obama congratulated Ross in a video before the style icon, singer and actress delivered an upbeat medley of her hits. Her performance Sunday included “I’m Coming Out,” ″Take Me Higher” and “The Best Years of My Life.”

She dedicated the performance to her fans, saying “You are everything to me,” and invited her family up on the stage to celebrate the honor, including the awards show host Tracee Ellis Ross.

Kelly Clarkson and Pink opened the American Music Awards with a tribute to first responders with a powerhouse vocal duet of R.E.M.’s “Everybody Hurts.” Before their performance on Sunday night in Los Angeles, Jamie Foxx stood in front of a group of first responders and said that this year “tested our faith.”

The two pop singers traded vocals on the song while images from recent natural disasters played on screens behind them. They ended the duet with a hug and got a standing ovation.

The performers at the 2017 American Music Awards are evenly split between men and women, but the nominees? Not so much.

In categories like artist of the year and favorite pop/rock album, where men and women compete, no female acts are in contention. Other categories where male acts dominate include tour and video of the year, among others.

Sunday’s AMAs are a reflection of the year in pop music. No woman hit the top of Billboard’s Hot 100 chart in 2017 until Taylor Swift and Cardi B did so in September.

Bruno Mars is the top contender at the AMAs.