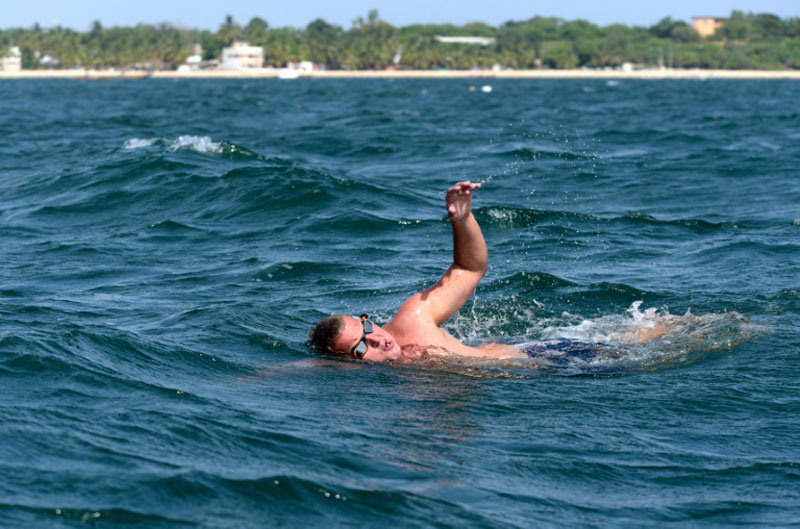 As a boy, Ben Hooper wanted to join the British explorers he idolized for surmounting the impossible, and now as he prepares to swim across the Atlantic, he hopes to equal their daring feats — and survive.

Hooper is wrapping up no less than three years of preparation for an immense journey that will see him swim up to 10 hours a day in two sessions for nearly five months, starting on Africa’s western extremity and finishing on Brazil’s east coast.

Hooper will leave from Senegal on Tuesday with 11 crew members including a medic on his support boat, and will spend around 140 days struggling against what he calls “the blue wall” — miles and miles of ocean with no land stops.

“Shark-wise, we have two lines of defense,” says Hooper, squinting at the waves of the Atlantic lapping at the Voile d’Or beach in Dakar, where he will begin his crossing.

The 38-year-old animatedly explains how he will carry synthesized rotting shark meat to ward off the predators, supplemented by cables sending out an electrical signal to put off any snub-nosed killers.

Sharks and jellyfish are not the only adversity: his muscles will be in agony after swimming 20 kilometres (12.4 miles) every day, his throat parched by saltwater, and there is little he can do to avoid sunburn in waters that may be too warm to wear a wetsuit.

So why would any rational human do this? A combination of near-death experiences and a love of old-fashioned British derring do, Hooper says.

A premature baby, he was born with collapsed lungs and barely survived. After five years of better luck, he almost drowned in a Belgian swimming pool.

“That was where my affinity with water started. Rather than scare me, that’s where it began,” he says. Years of charity swims, swimathons, scuba and free dives followed, through uncertainty professionally.

A bout of depression led Hooper to leave a police career in his late twenties and begin studying psychology, but the depression returned three years ago and he realized something had to change.

He began looking back to the fearless English explorers who had long fascinated him: Ranulph Fiennes, who reached both the North and South poles overland, and Vivian Fuchs, the first man to cross the Antarctic on foot.

“Ran Fiennes has been an inspiration of mine since I was a teenager,” he said, describing his delight at receiving a letter from the legendary adventurer in his mid-teens.

“He sent me loads of information and put me in touch with the late Sir Vivian Fuchs, who sent me a stack of stuff from New Zealand.”

After some thought, his conclusion was unequivocal: Hooper would attempt to become the first man to swim the entire distance across the Atlantic, a challenge he says no one else has ever completed before.

There is a counter-claim: in 1998 Frenchman Benoit Lecomte claimed to have swum from Massachusetts to Brittany, but Guinness World Records refused to validate his feat.

Lecomte was forced to spend a week on the Azores islands in the middle of the Atlantic recovering from exhaustion before completing his swim.

“Benoit Lecomte tried to claim it in 71 days, 3,700 miles. With all due respect to Benoit’s feat, Guinness (World Records) never verified it, because you can’t swim that amount per day. It’s ludicrous,” Hooper says.

Hooper says reaction to his plan has been varied, not least because he is far from a professional athlete.

“I’m not ripped like Michael Phelps,” the stocky Englishman admits, patting his slightly rounded stomach while referring to the US Olympic champion.

Then there have been critics who have attempted to sour encounters with what he describes as “professionals not in it for the right reasons”.

“I am on a very, very limited budget. I have given up work to do this and we are dependent on donations, sponsorship. We got let down by two sponsors in the last month,” he admits.

Driving him back to the pool and the gym every day is his daughter, Georgie, who wants to become a marine biologist and is the “key person I wanted to inspire,” Hooper says.

The eight-year-old has given him the strength to push through criticism that he is mad, or at least dangerously unprepared. “Every time I talk to her she makes me laugh and makes me realise I am a worthwhile person,” he says.

How does he reconcile putting himself at such risk with his fierce love for his daughter?

“A couple of weeks back I did think about death, but, well, I’ve been there six times already,” he says of his several brushes with the Grim Reaper. “If you don’t step outside the box once in a while, the lid’s going to close on you.”

Hooper’s journey will be logged and filmed and can be tracked on his “Swim the Big Blue” website.

A life inspired by the art of theater