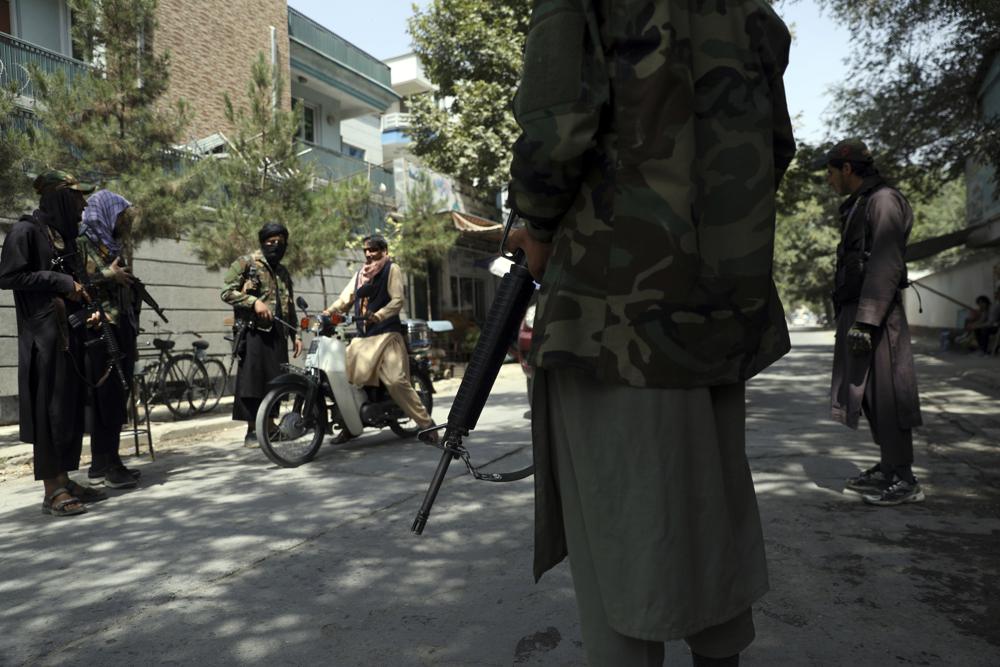 Taliban fighters stand guard at a checkpoint in the Wazir Akbar Khan neighborhood in the city of Kabul, Afghanistan, Sunday, Aug. 22, 2021. A panicked crush of people trying to enter Kabul's international airport killed several Afghan civilians in the crowds, the British military said Sunday, showing the danger still posed to those trying to flee the Taliban's takeover of the country. (AP Photo/Rahmat Gul)

KABUL, August 22: A panicked crush of people trying to enter Kabul’s international airport killed seven Afghan civilians in the crowds, the British military said Sunday, showing the danger still posed to those trying to flee the Taliban’s takeover of the country.

The deaths come as a new, perceived threat from the Islamic State group affiliate in Afghanistan has seen U.S. military planes do rapid, diving combat landings at the airport surrounded by Taliban fighters. Other aircraft have shot off flares on takeoff, an effort to confuse possible heat-seeking missiles targeting the planes.

The changes come as the U.S. Embassy issued a new security warning Saturday telling citizens not to travel to the Kabul airport without individual instruction from a U.S. government representative. Officials declined to provide more specifics about the IS threat but described it as significant. They said there have been no confirmed attacks as yet by the militants, who have battled the Taliban in the past.

On Sunday, the British military acknowledged the seven deaths of civilians in the crowds in Kabul. There have been stampedes and crushing injuries in the crowds, especially as Taliban fighters fire into the air to drive away those desperate to get on any flight out of the country.

“Conditions on the ground remain extremely challenging but we are doing everything we can to manage the situation as safely and securely as possible,” the Defense Ministry said in a statement.

On Saturday, British and Western troops in full combat gear tried to control the crowds pressing in. They carried away some who were sweating and pale. With temperatures reaching 34 degree Celsius (93 degrees Fahrenheit), the soldiers sprayed water from a hose on those gathered or gave them bottled water to pour over their heads.

“Listen sir, you need to calm down,” one soldier told a man laying in the dirt, as another gave him an orange liquid. “Calm down.”

It wasn’t immediately clear whether those killed had been physically crushed, suffocated or suffered a fatal heart attack in the crowds. Soldiers covered several corpses in white clothes to hide them from view. Other troops stood atop concrete barriers or shipping containers, trying to calm the crowd. Gunshots occasionally rang out.

Speaking to an Iranian state television channel late Saturday night in a video call, Taliban spokesman Mohammad Naeem blamed the deaths at the airport on the Americans in what quickly became a combative interview.

“The Americans announced that we would take you to America with us and people gathered at Kabul airport,” Naeem said. “If it was announced right now in any country in the world, would people not go?”

The host on Iranian state TV, which long has criticized America since the 1979 Islamic Revolution, quickly said: “It won’t happen in Iran.”

Naeem responded: “Be sure this will happen anywhere.”

Thousands rushed the airport last Monday in chaos that saw the U.S. try to clear off the runway with low-flying attack helicopters. Several Afghans plunged to their deaths while hanging off the side of a U.S. military cargo plane. It’s been difficult to know the full scale of the deaths and injuries from the chaos.

The Biden administration is considering calling on U.S. commercial airlines to provide planes and crews to assist in transporting Afghan refugees once they are evacuated from their country by military aircraft. Under the voluntary Civil Reserve Air Fleet program, civilian airlines add to military aircraft capability during a crisis related to national defense. That program was born in the wake of the Berlin airlift.

The U.S. Transportation Command said Saturday it had issued a warning order to U.S. carriers Friday night on the possible activation of the program. If called upon, commercial airlines would transport evacuees from way stations outside Afghanistan to another country or from Virginia’s Dulles International Airport to U.S. military bases.

Meanwhile, the Taliban’s top political leader arrived in Kabul for talks on forming a new government. The presence of Mullah Abdul Ghani Baradar, who returned to Kandahar earlier this week from Qatar, was confirmed by a Taliban official who spoke on condition of anonymity because he was not authorized to talk to the news media. Baradar negotiated the militants’ 2020 peace deal with the U.S., and he is now expected to play a key role in negotiations between the Taliban and officials from the Afghan government that the militant group deposed.

Afghan officials familiar with talks held in the capital say the Taliban have said they will not make announcements on their government until the Aug. 31 deadline for the U.S. troop withdrawal passes.

Abdullah Abdullah, a senior official in the ousted government, tweeted that he and ex-President Hamid Karzai met Saturday with Taliban’s acting governor for Kabul, who “assured us that he would do everything possible for the security of the people” of the city.

KABUL, Aug 9: Afghanistan agreed on Sunday to release 400 “hard-core” Taliban prisoners, paving the way for the beginning of... Read More...

Taliban to take part in ‘intra-Afghan’ talks in Moscow

ISLAMABAD, Feb 4: The Taliban said Monday they will participate in what they call “intra-Afghan” talks in Moscow designed to... Read More...