Bringing out the artist in you 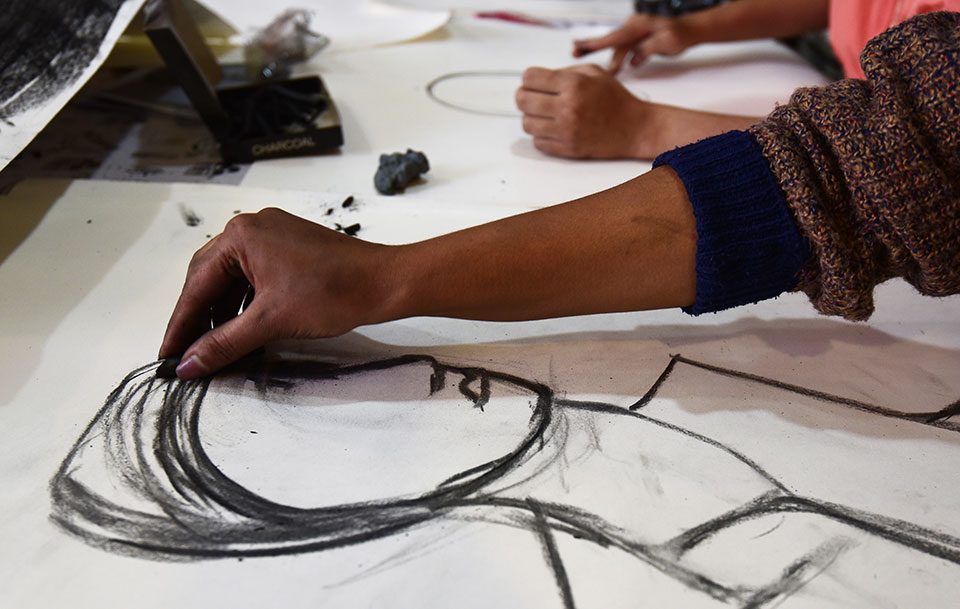 As a walk-in art studio, House of Palettes has been encouraging more and more people to tune in to their artistic side since its inception. Currently, the studio has been focused on running workshops that will help people understand and create art better. The Charcoal Portrait Workshop is an ongoing three-day course, happening on Saturdays of November. The first and the second phase of the workshop took place on November 2 and November 9, and the final phase will be held on November 16.

“We know everyone is busy during the weekdays and that this course on charcoal portraits won’t finish in a single day. So, for the convenience of the people who are taking the course, we took to organizing it on three simultaneous Saturdays,” says Shradha Joshi, studio manager at House of Palettes. She further states that the House of Palettes team had been meaning to organize such a workshop for a long time but they hadn’t been able to find a suitable artist to teach the course.

That’s where the artist, who is overlooking this workshop, Sumit Balla, comes in. He is a design major graduate from Bunker Hill Community College in the US whe mostly creates digital art. He came back to Nepal about five months ago to learn more about the traditional art style of Nepal and is the one who thought of organizing a workshop on art created by charcoal.

Joshi reveals that it’s rare to see a workshop on charcoal portraits – or just any form of art utilizing charcoal – in Nepal and since it’s a unique course, at least in the context of Nepal, the House of Palettes team was very enthusiastic about hosting this art session.

After the initial announcement of the workshop, 20 people signed up for it. But only 15 made it to the actual class and that might have been for the better, says Joshi, as the pages that students work on during this course are pretty big and the studio can only fit so many students. (The studio can fit about 10 to 15 more students had most of them used the regular easel provided by the studio.)

According to Joshi, the students who participated in this particular workshop were mostly those in their 20s and early 30s. And because there was no prior knowledge of art required for participation, the participants ranged from people who are great at expressing themselves through art to people who are actually just beginning their journey in art.

Saiyam Shrestha, one of the participants of the workshop, claims that this course has been very helpful for him in regards to getting an in-depth understanding of sketching portraits. “I love that the artist is teaching this subject from the basics. I’ve honestly learned a lot in the past two Saturdays,” says Shrestha who is a tattoo artist at Inkprovised Tattoo, a tattoo hub located within the premises of Evoke Cafe and Bistro in Jhamsikhel, just next to House of Palettes.

As the instructor for this workshop, Balla created the syllabus for the course and he is very confident about how effective it is in teaching the right techniques and skills. “I’ve included everything I’ve learned about charcoal painting and portrait making in this course. Although it’s a concise course it’s very helpful for people who want to learn the basics of these subjects,” says Balla.

Although the workshop is just three-day long and two sessions have already passed, new participants can actually join in on the last day as well. They will be called in a little earlier than the regular students (who have been attending classes from the first day) and be briefed on everything that has been taught in the earlier classes. Balla, personally, doesn’t think this will be of much help and encourages interested people to join such classes from the beginning to get an in-depth understanding of what’s being taught.

More workshops in the future
If you missed out on this workshop then there are tons of other similar workshops coming your way as House of Palettes has plans of organizing similar sessions in the future as well. Although the duration of the classes and the topic or theme will be different, Joshi reveals that the studio will slot them for Saturdays as that’s the day most people have some free time to indulge in their creative hobbies like art.

The studio has already released the details for the next workshop through their social media accounts. It will be a workshop on mountain painting and Suhana Shrestha will be conducting it. The workshop will take place at the studio on November 23 from 10:00 am to 12:00 pm. House of Palettes also has plans of organizing workshops on other forms of art like poetry. Also, they have already roped in Balla for a future workshop on landscape painting as well.

KATHMANDU, March 16: Federation of Handicraft Associations of Nepal (FHAN), with the support of Ministry of Commerce and Delegation of the... Read More...

KATHMANDU, Feb 3: Photo.circle will be organizing two photography workshops from the month of February to March. ... Read More...