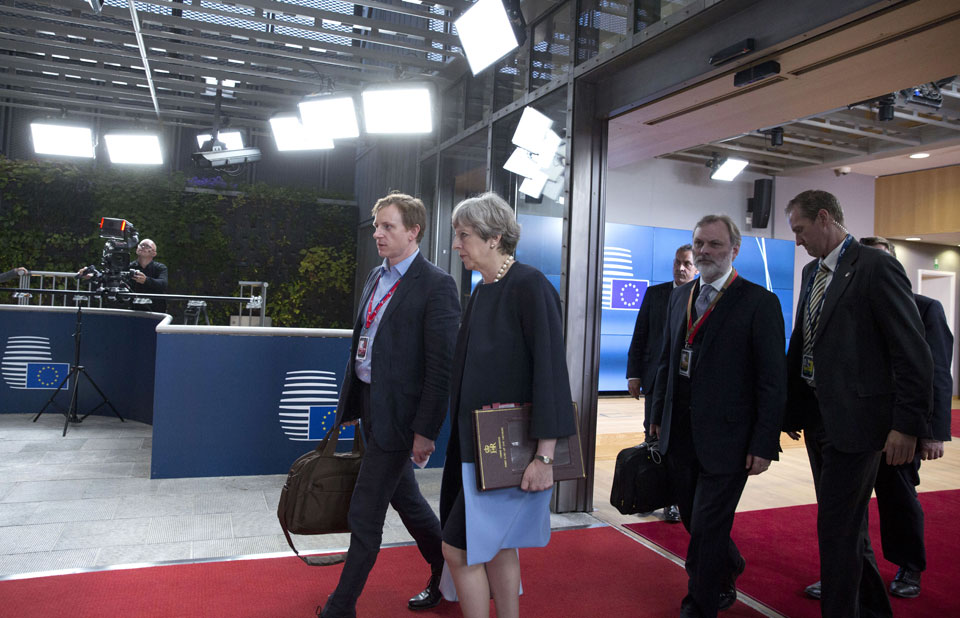 BRUSSELS, June 23: British Prime Minister Theresa May promised Thursday that EU citizens will not be immediately kicked out of Britain when it leaves the union and says their fate will be a top priority in Brexit negotiations — prompting guarded praise from other EU leaders at a tense time for the continent.

May laid out benchmarks for the rights of 3 million EU citizens living legally in Britain and how they should be shielded from excessive harm because of the divorce. She made it clear that Britain wants reciprocal measures for the 1.5 million British citizens living in the EU. The issue of citizens' rights is especially sensitive in the Brexit talks.

Under May's proposal, EU citizens with legal residence in the UK will not be asked to leave and will be offered a chance to regularize their situation after Brexit, a senior British official said. May also promised to cut the burdensome bureaucracy such paperwork can involve, the official said.

"No one will face a cliff edge," the official said, speaking on condition of anonymity since May made the proposal at a closed-door EU summit dinner.

Merkel welcomed May's promises, but insisted that "there are, of course, many, many other issues." She mentioned the bill that Britain will have to pay to leave and questions about how to deal with the border between Northern Ireland and EU member Ireland.

"It means we have lots left to do," Merkel said.

Austrian Chancellor Christian Kern said May's proposals are "a first step" but warned there are still many European citizens in Britain who would not be covered by the proposals. "We are now at the start of all this and we don't know whether it will be a sprint or a marathon," he said.

The Dutch prime minister, Mark Rutte, said there are "thousands of questions to ask" about May's proposals, and questioned why the British leader was laying them out with EU leaders instead of with the Brexit negotiators.

Britain's departure in 2019 will cause the EU to lose one of its biggest members and a global player, but the other EU nations were already looking at some of the spoils of the divorce. They will decide in November where the EU agencies currently based in Britain will move to on the continent, EU chief Donald Tusk announced.

The bloc's medicines and banking agencies are now in London, and almost every EU nation wants one of the two agencies. On Thursday, the EU leaders agreed on procedures for a fair pick.

Discord over whether Britain's exit process could still be reversed surfaced at the summit.

Tusk said when British friends asked him if he could imagine a way for Britain to remain part of the bloc, he told them: "The EU was built on dreams that seemed impossible to achieve. So who knows?"

"You may say I am a dreamer but I'm not the only one," Tusk added, quoting a lyric from the late John Lennon's "Imagine."

Belgian Prime Minister Charles Michel, however, said the will of the British people who voted in a June 2016 referendum to leave the EU had to be respected.

"I am not a dreamer. And I am not the only one," Michel said.

"What we also need is certainty, for our companies in Belgium, in Europe," he said. "If we back this image that Brexit perhaps would not happen, it brings an uncertainty."

Merkel also focused on imagining an EU without Britain.

"For me, shaping the future of the 27 (remaining) member states has priority over the question of the negotiations with Britain on its exit," Merkel said.

French President Emmanuel Macron pledged at his first EU summit as head of state to breathe new life into a European Union stung by Britain's departure and deeply divided over the best way to accommodate refugees.

He pushed at the summit for joint European defense, a joint budget for countries that use the euro and a tougher stance against the U.S. and China on trade.

Macron promised to forge ahead with Germany to make the bloc stronger and more relevant to citizens.

"Europe is not, to my mind, just an idea. It's a project, an ambition," he told reporters.

On the opening day of the two-day leader's summit, the EU announced agreements on extending sanctions against Russia and on fighting climate change.

After a string of small-scale terrorist attacks in European capitals this week, the EU leaders also agreed to join efforts seeking to curb online extremism and crack down on Europeans who go abroad to fight jihad. They also agreed to jointly develop or purchase military equipment like drones.