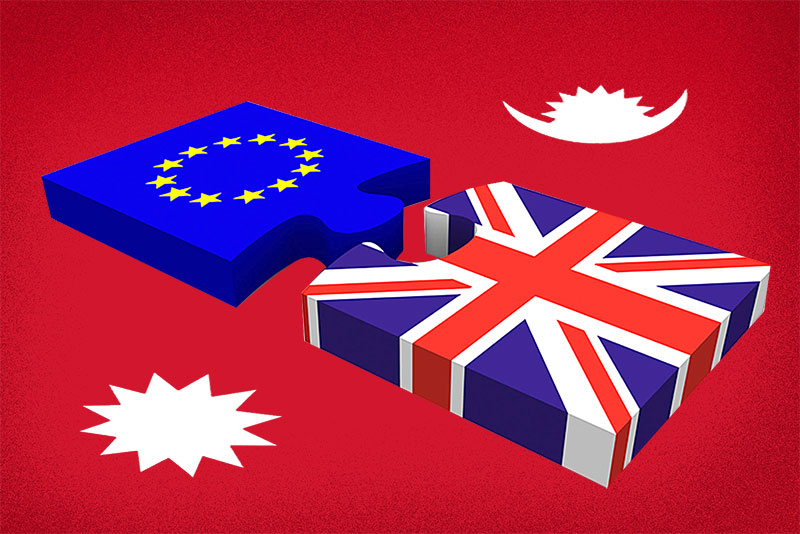 Brexit vote has grave implications for all countries where there is social discrimination by the elite, including Nepal

With the Brexit referendum’s result in, Britain is on its way out of the European Union (EU) and the United Kingdom (UK) is all set to become a disunited kingdom.

The UK’s autonomous territory, Scotland, has voted to remain in the EU to benefit doubly: one, to avail the perceived economic advantages of a larger economic entity like the EU, and two, to disassociate itself from UK and turn fully independent, which it could not do in the September 2014 referendum. Its separation from the UK is likely sooner than later.

However, that may not be the case with UK’s largely Protestant Northern Ireland, even though the region gets significant subsidies from the EU.

The Catholic-dominated Ireland had split from the UK in December 1921 and is a member of the EU. As Northern Ireland’s older population, which has opted to remain within Britain in the referendum, dwindles in natural course over the next decade or two, this appendage of Britain may also like to become one with Ireland to benefit from EU’s larger economy. Demands for a border poll on a united Ireland were raised soon after the UK voted to leave the EU.

As a new world order is in the making, commoners and pundits alike are pondering the outcome of the Brexit referendum. There are explanations, exultations and lamentations galore from all over the world. It would be foolhardy to consider them as calls from the heart. In an era when strategic geo-political and geo-economic concerns drive nation-states, it is unlikely that any country is really worried about the probable disintegration of Britain, its forthcoming exit from the EU and the likely pain it may cause to the Brits. In fact, some leading EU member countries have already tauntingly asked Britain to hasten the process of separation.

If that was not enough, there is great turmoil within Britain itself over the 51.89 percent: 48.11 percent referendum result in favor of leaving the EU. By and large, the vote in favor of the exit is being interpreted as a victory of the British pensioned seniors, underprivileged, unemployed and the lowly employed over the British elite.

The upwardly mobile have found jobs and business opportunities in the 28-nation-strong EU. The union offers ease to do business and travel. The EU’s economy put together is larger than that of the US. No wonder, finance-obsessed Londoners voted to remain within the EU though they will have to fall in line with the overall ‘leave’ result of the referendum. But the deprived Brits faced falling standards of National Health Scheme, low wages and dwindling jobs at the middle and lower levels, which too are being gobbled up by immigrants from the former Soviet bloc states and communist countries, thanks to pro-immigrant policies of the EU.

The massive influx of refugees from strife-torn Syria, Afghanistan, Iraq and other Islamic countries into Europe only added to the fear and anxiety of the common British people. What riled the English more was that unlike other immigrants, Muslims who had come to the island many decades ago, have yet not come to terms with local customs and values. On the contrary, radical Islamists managed to get permission to practice Shariah law in Britain with the backing of the ultra-liberal EU and politicians seeking vote banks. The common Brit retaliated by voting to quit EU and sought to resurrect his English identity.

It is difficult to sit in judgment over the ‘remain’ and ‘leave’ camps of the Brexit referendum but we must evaluate its impact on Nepal.

First, will Brexit impact remittances from Britain adversely? Not at all! There are just over 80,000 persons of Nepali origin in Britain, an inconsequential figure compared to the multi-million number of Nepali migrants in India, Malaysia, Saudi Arabia, the UAE and Qatar. Moreover, Nepalis in Britain have assimilated harmoniously with the locals. Unlike Muslims, they have avoided living as closed communities in ghettos.

Yet Brexit has grave implications for all countries where there is social discrimination by the elite, Nepal included.

Poverty is, of course, a common denominator across Nepal. But Madheshis living in the Tarai belt along the country’s border with India perceive deprivation as the fallout of deliberate discrimination by the Pahadi ruling class. They claim to have been colonized. They point out that Pahadi-origin population in Tarai has been pumped up from six percent in 1951 to the current 36 percent; that 75 percent of the country’s revenue emanates from Madhesh but merely 10 percent of the national budget is spent on the region; that positions of political and administrative power have been usurped and monopolized by the Kathmandu-based elite; that Nepali language and dress is being imposed on them to liquidate their cultural identity; that there is an absurdly adverse co-relation between their population and parliamentary representation; that ...

Unfortunately, all this is not a figment of Madheshi imagination. Senior Madheshis still remember that they needed visas to enter Kathmandu till as late as 1958, and also that the Tarai belt became part of Nepal, in parts, first in 1816 following an agreement with the then East India Company and then in 1859 as a gift for helping the British in suppressing the 1857 Sepoy Mutiny. Indians prefer to view the 1857 upsurge as their first war for freedom where Hindus and Muslims fought together against the Company.

So there is ample fuel for fire in Madhesh. Britain’s decision to detach itself from the supranational authority of EU can only stoke the blaze, not only in Nepal but wherever there is a feeling of such discrimination. EU’s domineering ways are being resented elsewhere too and feeble rumblings of a Frexit (France) and a Nexit (Netherlands) are already being felt. The last few decades have witnessed the world’s map being altered drastically.

The powers that be in Kathmandu need to do some real soul searching. People do not live by bread alone (though even that is not easily available to a large section of our countrymen). They also want honor and rights with their identity intact. But their patience is not infinite. Public movements have a history of carving out unexpected courses.

Way back in 1775, Samuel Johnson had proclaimed that patriotism is the last refuge of a scoundrel. Can we let self-centered false patriotism rupture the nation?

The author is Poet and Writer and also Chairman of BLC and Basant Chaudhary Foundation.
Views are personal.

Monsoon begins in Nepal
20 hours ago