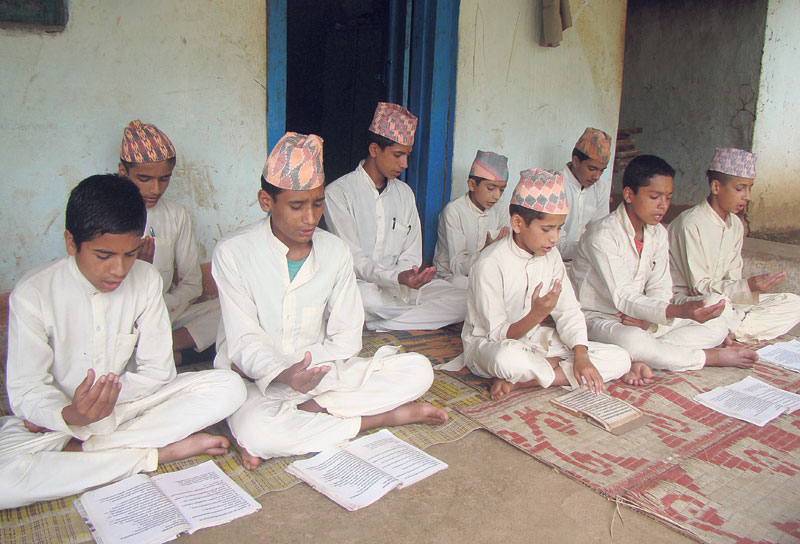 ILAM, July 5: Gone are the days when only Brahmins could read Sanskrit, only Janajatis could pursue Buddhist education and those from Kirant communities could go through the holy book of Kirant. Unlike in the past, anyone regardless of caste, creed, religion, sex and community can now read those holy books in order to gain knowledge. Toribari, situated at Barbote VDC ward number one in Ilam district, illustrates the paradigm shift.

“Sanskrit is the subject that imparts knowledge,” Ram Shrestha, a tenth grader, said. “It does not belong to any specific caste, sex and group.”

The institution has also proved the traditional belief to be false by encouraging girl students to pursue Sanskrit. Traditionally, Sanskrit education was limited to males only. Interestingly, the number of girls studying Sanskrit is on the rise, Paudel informed.

He added that anyone who takes a look from a distance first assumes that Brahamins in white Daura Suruwal and Dhaka Topi are reciting Vedas in the institution. But they get astonished once they learn about their backgrounds.

The education center teaches the lesson that caste and religion cannot be a barrier to restrict anyone from pursuing knowledge.

The institution, that was established seven years ago with an aim to provide multilingual education, is currently teaching Sanskrit and English languages to the students.

A total of 115 students are studying in the school. The students from the school have already appeared in School Leaving Certificate (SLC) for the third time, according to principal Bhogendra Dahal.

He informed that the number of students from Dalit and Janjati communities among others enrolling in the school is on the rise.

Although the school is managed by the government funds, seven teachers out of 12 are arranged from individual source. Locals have also been contributing to help operate the school.

I extend my warmest congratulations on your recent SEE results. If you have achieved what you deserved, be happy. If... Read More...

POKHARA, March 18: A community school in Pokhara continues to attract students in a significant number in the past three years... Read More...