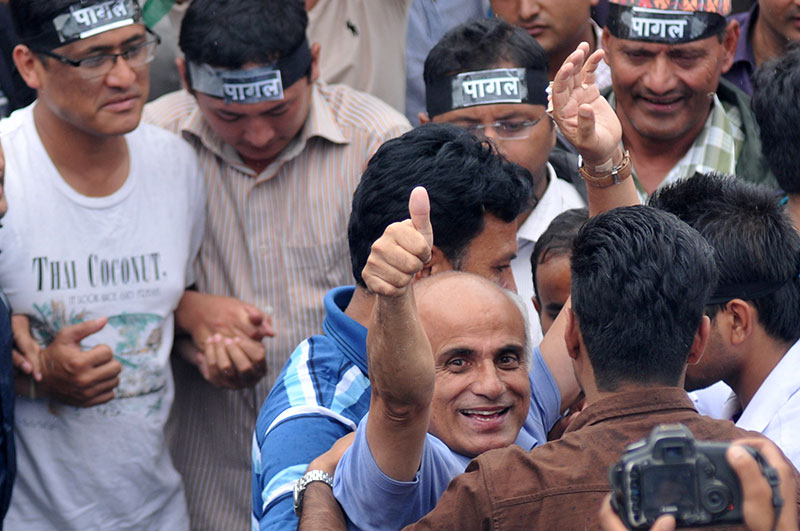 That we have been reduced to adopting fast-unto-death and relay hunger strikes for anything indicates something is wrong with us
Three major news of non-violent protests gripped the nation in the last couple of years. The second was much-talked about protest of Dr Govinda KC and his crusade against the medical ‘mafia’. It’s interesting to note how certain words have, over the course of year, started being associated with something other than their true meaning. Mafia is no more a member of an illegal gang. Consensus is no more a general agreement but “syndication.” There are quite a few others but we could discuss them some other time. The third protest was of student wing of Nepali Congress demanding a free and fair election in what is claimed as country’s largest democratic party.

The first one was about Nanda Prasad Adhikari. He died after eleven months of hunger strike. We did not care much. Now, his wife, Ganga Maya, is fasting unto death seeking justice for their murdered son. By the look of things, she will succumb to it too.

Obviously questions will be raised regarding why these three protests really went on to become ‘big’ but failed so miserably. It would be difficult to find a simplistic answer as each of the cases focuses on entirely different issues.

Why do we even have to fast?
We all know Gandhi’s Satyagraha was against the establishment. Today, we all are part of the system we created and therefore ‘fasting’ ceases to make the similar kind of appeal. The fact that we have been gradually reduced to adopting fast-unto-death and relay hunger strikes for anything and everything indicates something is going wrong.

I am not a student of political science but as its resident, Kathmandu has made me politically aware. It’s more to do with the “social design” than accident. I feel I belong to a society where I cannot pick up any television channel and newspapers without having to read about the political class and their activities.  I remember talking to Kevin, a friend of mine working in the US telling me he did not know the name of his president. He said he did not care. He liked and followed sports. Here you are forced to follow things you may not like.

The probable reason for such a ‘deadly’ protest is often cited as an outcome of authorities turning deaf ears to lawful demands. If courts are there and every free human being born and bred in Nepal has right to justice, why do people have to seek solace in fasting? I am sure if you happen to be a normal law abiding citizen like me, these are something that must have crossed your minds. However, the most important fact that remains is our increasing affinity to silence.

That begs the question: Do we really believe in Gandhian ideology of non-violence or we are too scared to protest, to raise our voice? It’s amazing that we do not fight out battles in courts but in silent hunger protests.  Dr KC’s satyagraha is a reflection of the society that we have been reduced to. We all know he is right. His most recent protest too has ended in a manner all last seven have. I see no major difference.  But I bet Dr KC will not be surprised if he’s duped again by the government. The only change, this time, is he has thrown a bigger challenge by challenging CIAA chief. We now know much about our parliamentarians and hence know what to expect: they will not speak up.

So how do we explain this phenomenon? Reasons why societies become so voiceless can be explained through a theory called the theory of spiral of silence. The theory assumes that once a society fails to take cognizance of what is wrong and what is right, it spirals into silence.

For instance, in 1991, a survey was carried out to measure the support for Gulf War. The results showed that most people were opposed to the war.

However, it’s been reported that US media which was supportive of the government and war, showed otherwise. People, who got information through media, were more supportive of war as they wanted to be in the majority. This is spiral of silence. People who did not support the war were many, but did not speak up against it. They got the view that what media showed was the view of the majority.

That was of course a deliberate ploy on the part of media.

The one that we witness is perhaps not that deliberate. The legacy of the Maoist insurgency still seems to carry on in some shape or form.  Fear perhaps is the only plausible explanation. The fact that telecom towers of private telecom operators have been burned down and perpetrators claim the responsibility for it and yet go unpunished does not augur well with the kind of society we plan to be part of.  It is a subconscious reminder that there are extra constitutional thugs and forces out there.

The theory of silence is perhaps best explained by bandas. We really have not protested against bandas.  No one wants to obey and yet no one ventures out to ‘dis-obey’. There is a concern that you might be the only one plying on the empty road.

This is not to say silence is dead and peaceful protests do not work.

We all remember Mohammed Bouazizi, a fruit seller from Tunisia who is attributed to kick start the Arab uprising. The sustained and prolonged mistreatment by the police officers had become so unbearable that he did not have much option. He just felt that he had to do something really drastic and ended up immolating himself in the broad day light.

We all know the fallout, the outcome. That brought about the change of unimaginable magnitude. It helped people come out of the ‘spiral of silence’ so much that it engulfed the entire Arab region.

The present day world is getting uncomfortably irritated. The cases of shooting and stabbing have become pretty common. That could be the fallout of certain kind of frustration. That is not a good sign.

Ours is lurking towards deafening silence. It’s not good sign. This one too is an ominous sign.

And I had to break your heart

Though you opened the door and took me in Though you chose for me the best flower from the garden... Read More...