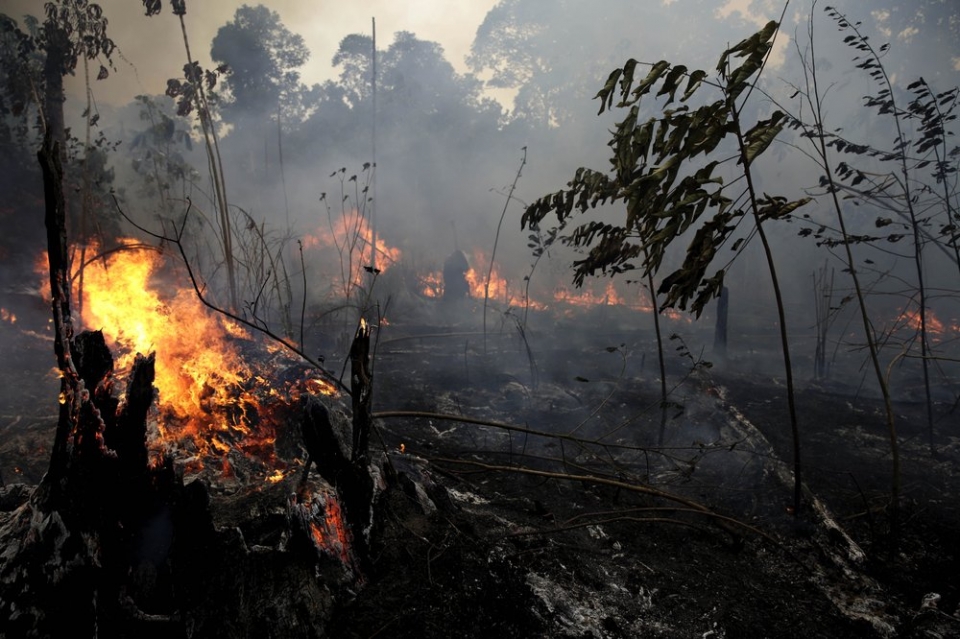 BRASILIA/PORTO VELHO, Aug 28: Brazil said on Tuesday it was ready to accept foreign aid to help fight fires in the Amazon but only if it could determine how it was spent, in an apparent attempt to smooth over a public spat between the Brazilian and French presidents.

The comments by presidential spokesman Rego Barros came after governors of states in the Brazilian Amazon told President Jair Bolsonaro that they needed the money to help fight the record wildfires in the world’s largest tropical rainforest.

“The Brazilian government, through its president, is open to receiving financial support from organizations and countries. This money, when it enters the country, will have the total governance of the Brazilian people,” Barros said.

Separately, a diplomatic source in Brasilia told Reuters the Brazilian government had also accepted 10 million pounds from Britain to fight the fires. Bolsonaro’s press office was not immediately available to comment on the information.

Earlier on Tuesday, Bolsonaro had said he would only consider accepting a $20 million offer of aid from the Group of Seven wealthy nations if French President Emmanuel Macron withdrew the “insults” against him.

Bolsonaro and Macron have been embroiled in a deeply personal and public war of words in recent days, with Bolsonaro mocking Macron’s wife and accusing the French leader of disrespecting Brazil’s sovereignty. Macron has called Bolsonaro a liar and said Brazilian women are “probably ashamed” of him.

The office for the French president declined to comment.

Brazil’s president is finding himself increasingly isolated on the global stage over his response to the blazes, which threaten what many view as a key bulwark against global climate change.

The far-right government’s response could threaten Brazil’s trade deals and powerful agribusiness sector, which is a crucial driver of its recession-plagued economy.

“We think that it’s not the moment to turn down money,” Flávio Dino, the governor of Maranhao state, told reporters after a meeting in which Bolsonaro pledged to agree on a package of legislative measures with the states by Sept. 5 to help prevent the surge in forest fires happening again.

The number of blazes in Brazil has skyrocketed 80% in the year to date compared to the same period in 2018, according to data from space research agency INPE.

About 90 km (55 miles) from Porto Velho, in the Amazon state of Rondonia, a Reuters witness saw houses abandoned due to the fierce forest fires. There were isolated patches of rain on Tuesday, but not enough to put out the fires, he said.

Widespread rain that could snuff the fires out are likely weeks away, according to weather data and two experts.

A local farmer, who declined to give his name, said he expected the fires to worsen next week when the forest is usually at its driest.

G7 leaders pledged the $20 million after discussing the fires ravaging an area often dubbed “the lungs of the world”.

The offer, which was made at a summit in France on Monday, has stirred up emotions within Bolsonaro’s nationalist government. Some officials are grateful for the much-needed help, and others view it as a colonial gesture that undermines Brazil’s control of its lands.

Bolsonaro raised Macron’s ire on Sunday when the Brazilian leader responded to a Facebook post that compared the looks of his wife Michelle, 37, with Macron’s 66-year-old wife Brigitte. “Do not humiliate the man hahahah,” Bolsonaro wrote.

Macron, who has accused Bolsonaro of lying about climate change policy, called the remarks “extremely disrespectful” to his wife.

On Tuesday morning, Bolsonaro said he would only countenance accepting G7 money if Macron retracted his earlier comments.

“First of all, Macron has to withdraw his insults. He called me a liar. Before we talk or accept anything from France ... he must withdraw these words then we can talk,” Bolsonaro told reporters in Brasilia. “First he withdraws, then offers (aid), then I will answer.”

Barros, the president’s official spokesman, told reporters later that Brazil was open to accepting international aid if it could decide how the money is spent.

U.S. President Donald Trump on Tuesday tweeted his support for Bolsonaro, an ideological ally on the environment, China and trade.

The Brazilian president “is working very hard on the Amazon fires and in all respects doing a great job for the people of Brazil - Not easy. He and his country have the full and complete support of the USA!” Trump tweeted.

Bolsonaro responded, also on Twitter: “We’re fighting the wildfires with great success. Brazil is and will always be an international reference in sustainable development.”

The fires are not limited to Brazil, with at least 10,000 sq km (about 3,800 sq miles) burning in Bolivia, near its border with Paraguay and Brazil.

Neighbors Peru and Colombia on Tuesday asked Bolsonaro to attend a meeting on Sept. 6 to discuss the disaster and come up with a long-term coordinated plan to stop deforestation.

Norway’s environment minister on Tuesday urged representatives of oil firm Equinor, fertilizer-maker Yara and aluminium producer Norsk Hydro to make sure their supply chains in Brazil are not linked to deforestation.

What’s the matter with China?
17 hours ago