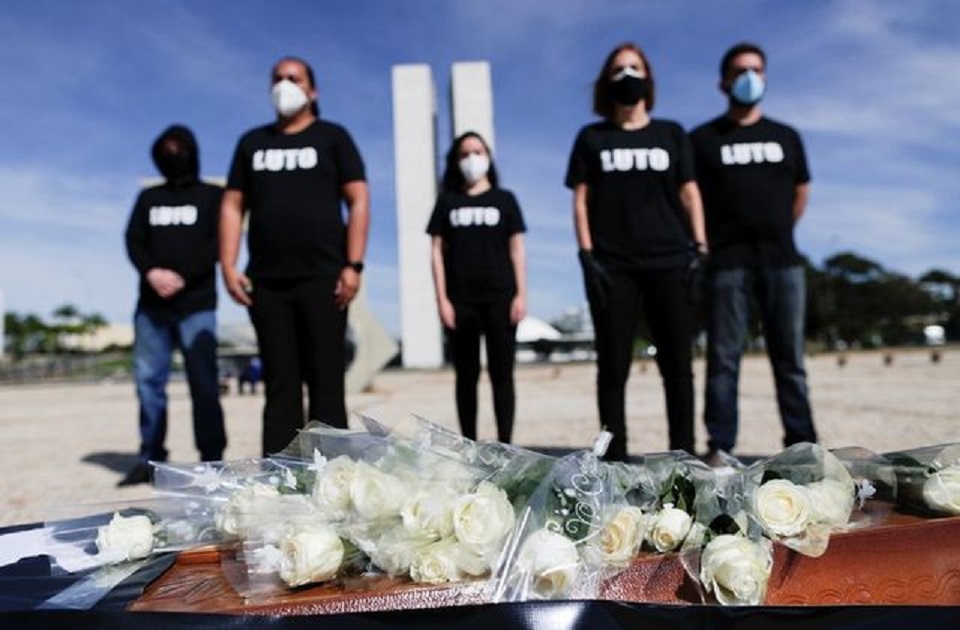 Health care workers stand behind a coffin which represents dead colleagues during a protest against Brazil's President Jair Bolsonaro and his handling of the coronavirus disease (COVID-19) crisis, in Brasilia, Brazil March 25, 2021. REUTERS/Ueslei Marcelino

The record caseload, along with 2,777 more COVID-19 deaths, comes a day after Brazil surpassed 300,000 fatalities from the pandemic, the world’s worst death toll after the United States.

Brazil’s outbreak has set weekly records due to a patchy vaccine rollout, a lack of national coordination and an infectious new variant. Critics, including senior lawmakers with ties to the president, are increasingly blaming Bolsonaro for his handling of the pandemic. He has drawn sharp criticism for his efforts to block lockdowns, scorn masks and sow doubts over vaccines.

Bolsonaro also faces growing calls to replace Foreign Minister Ernesto Araujo over failures in the country’s COVID-19 response. Senate President Rodrigo Pacheco said on Thursday that Brazil’s foreign policy must improve, adding that it was up to Bolsonaro to decide if he would replace Araujo.

A close ideological ally of the president, Araujo has faced criticism for his barbs against vaccine superpower China and struggles to secure doses from the U.S. stockpile.

Sources close to the president told Reuters that Bolsonaro would rather not lose Araujo, an avowed fan of former U.S. President Donald Trump who has struggled to make headway with new President Joe Biden’s White House. But the sources, who asked not to be named, said Araujo was not on a firm footing. One said the president was likely to ultimately ditch Araujo.

Bolsonaro, who had questioned the “rush” to buy vaccines last year, has pledged to ramp up the country’s inoculation drive, targeting 1 million daily doses, compared with about 350,000 per day over the past week.

On Thursday, Economy Minister Paulo Guedes suggested that the private sector could help speed up immunizations by buying supplies and donating them to the government. It was unclear whether the idea was viable in such a tight global market for vaccines.

RIO DE JANEIRO, Sept 5: Researchers held out hope that a famed skull and other valuable objects might somehow be... Read More...