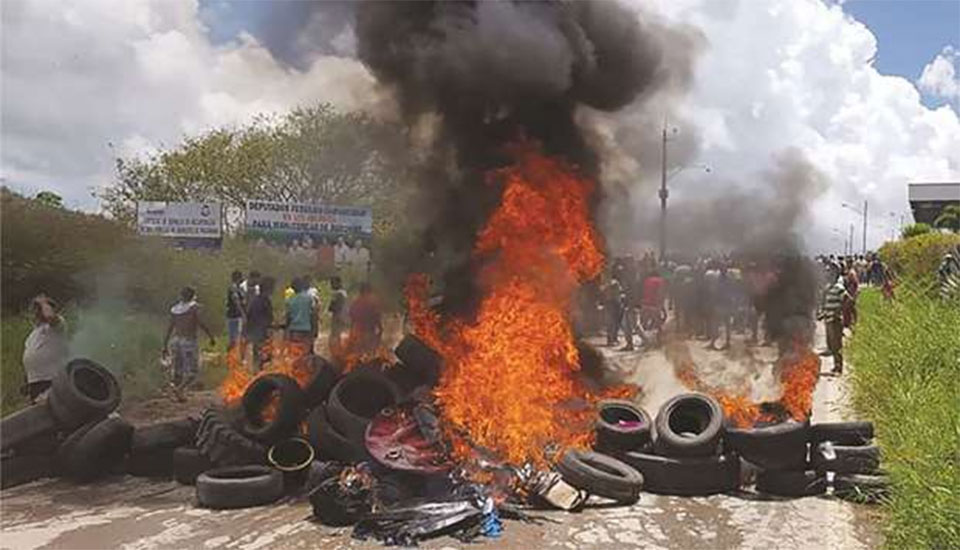 Residents of the Brazilian border town of Pacaraima burn tyres and belongings of Venezuelans immigrants after attacking their two main makeshift camps, leading them to cross the border back into their home country.

Aug 20: Brazil has called in troops to its border with Venezuela after residents of the Brazilian border town of Pacaraima drove out Venezuelan immigrants from their improvised camps, amid growing regional tensions. Tens of thousands of Venezuelans have crossed the border into Brazil over the past three years as they seek to escape the economic, political and social crisis gripping their country.

The latest show of tensions began early Saturday, hours after a local merchant was robbed and severely beaten in an incident blamed on Venezuelan suspects, in Pacaraima, where an estimated 1,000 immigrants are living on the street. Dozens of locals then attacked the two main immigrant makeshift camps and burned their belongings, leading Venezuelans to cross the border back into their home country. Shots were fired, stores were shuttered and debris littered the streets.

“It was terrible, they burned the tents and everything that was inside,” said Carol Marcano, a Venezuelan who works in Boa Vista and was on the border returning from Venezuela. “There were shots, they burned rubber tires.”

Marcano said that some Venezuelans reacted to the attack by destroying a car with Brazilian licence plates. She and her companions were among many who took refuge at checkpoints on the Venezuelan side of the border. Three Brazilians were hurt in the clashes, a spokesman for military police said. No information was immediately available on the state of the Venezuelans involved.

The merchant who was attacked “is known, he is a neighbour, and there was indignation when it was learned that he had been robbed,” a local told AFP on condition of anonymity. “People began to expel Venezuelans who were in the centre of the city, forcing them to return to their country.”

Roraima state Governor Suely Campos made a plea to temporarily close the border and asked Brazilia to send security reinforcements to “face the increase in crime” she links to Venezuelans in the region. In turn, the public security ministry vowed to send a contingent of 60 troops due to arrive today to join teams in the area.

Tensions are rising in Latin America over migration triggered by the crises in Venezuela and in Nicaragua, where President Daniel Ortega has led a brutal crackdown on anti-government protesters. Peru and Ecuador are halting immigrants at the border by requiring would be border-crossers to show their passports — which many lack — instead of simple identity cards.

Colombia has said it fears that Ecuador’s border controls, which went into effect Saturday after the country declared a migration emergency, will leave thousands of Venezuelans stranded in Colombia.

An estimated 3,000 people cross every day from Colombia to Ecuador in the border town of Rumichaca.

The United Nations estimates that 2.3mn Venezuelans have fled the crisis looking for work and to escape poverty, while Colombia has given temporary residence to more than 800,000. Many Venezuelans are aiming further afield to settle in Peru, Chile, Argentina or even Uruguay. Peru said 5,100 Venezuelans crossed into the country on August 11, a record for a single day.

In Costa Rica, hundreds of people took part in sometimes violent protests Saturday using Nazi symbols to repudiate Nicaraguan migrants. Some demonstrators, carrying swastikas and shouting anti-immigrant slogans, tried to attack Nicaraguans gathered in the central La Merced park in San Jose, and clashed with police who tried to contain them, Security Minister Michael Soto said, adding that there were only some minor injuries.

The clashes in Brazil took place amid an increase in robberies and violent incidents in the city of 12,000 people that locals blame on immigrants, while the government points to a lack of resources to address the situation and calls for the closure of the border.

In response to the latest violence, the Venezuelan Foreign Ministry urged Brazil to “guarantee the safety of Venezuelan nationals and take measures to protect and safeguard their families and belongings.” By nighttime, the streets were quiet again, authorities said.

Brazilian federal police, in charge of immigration, estimates that about 500 Venezuelans cross over to Brazil every day. In January alone, around 900 and 1,200 Venezuelans came to Brazil — a peak so far.  In the first semester of this year, around 56,740 Venezuelans sought to legalise their situation in Brazil requesting refuge or temporary residence.