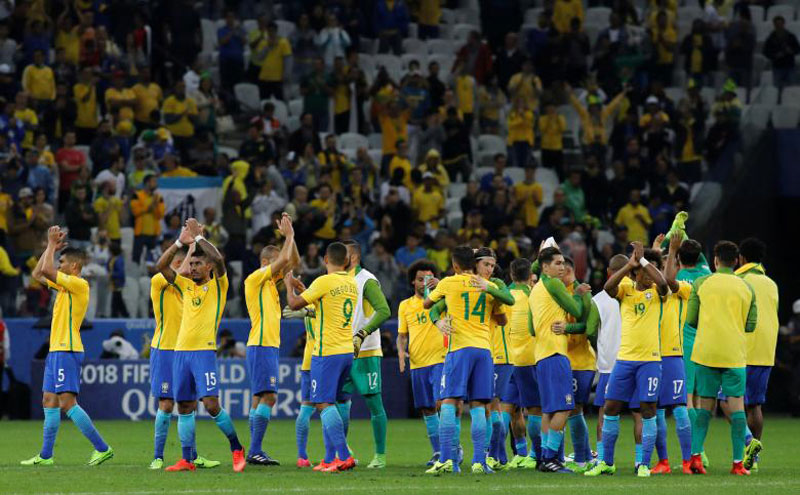 Brazil have become the first team to qualify for the 2018 World Cup, maintaining their proud record as the tournament's only ever-present side with a little help from Lionel Messi's foul mouth and lightly-regarded Peru.

The five-times champions beat Paraguay 3-0 on Tuesday for their eighth successive win in the South American qualifying competition.

That in itself was not enough to confirm their participation in Russia but Peru's surprise 2-1 win over Uruguay in a later game guaranteed Brazil a top-four finish.

With four rounds of fixtures remaining, Brazil have 33 points, followed by Colombia (24), Uruguay and Chile (23). Argentina (22) are currently in fifth place, which earns a two-legged playoff against the top-ranked Oceania region side.

Uruguay and Argentina still have to face each other which means it is impossible for both to overtake Brazil.

Argentina dropped down the standings after losing 2-0 away to Bolivia at high altitude in La Paz, weakened by the absence of Messi as he began a four-match suspension.

The five-times world player of the year was banned less than six hours before kickoff for swearing at a linesman in the previous match, a 1-0 win over Chile.

He will now only be available for the last of Argentina's games, a potentially key match in Ecuador.

Russia are guaranteed a place as hosts.

MOSCOW, July 12: Mario Mandzukic scored in the 109th minute as Croatia came from behind to beat England 2-1 after extra... Read More...