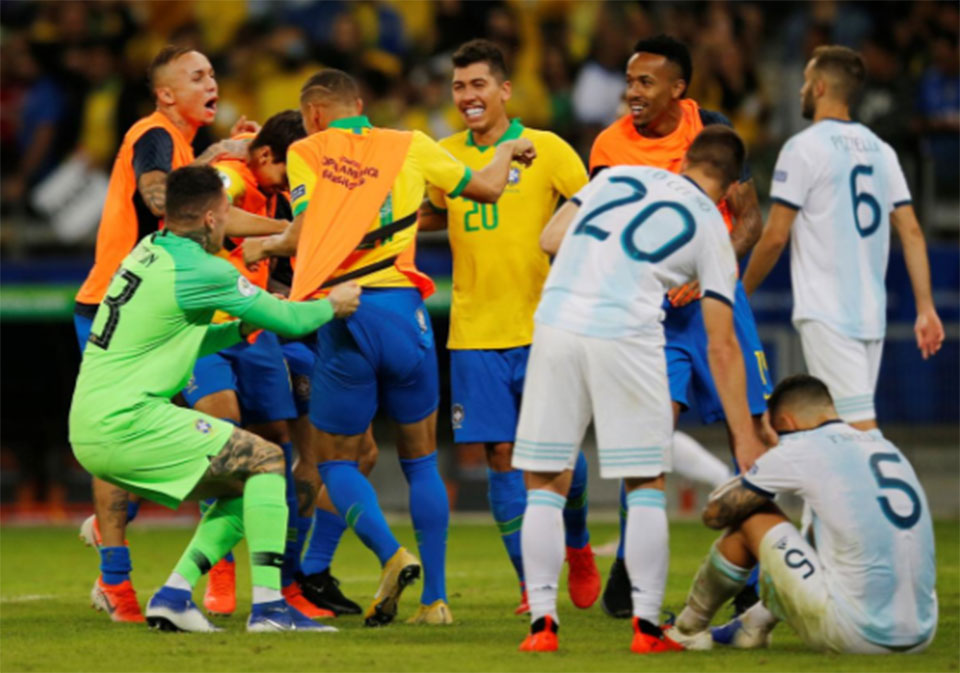 BELO HORIZONTE, July 3: Brazil advanced to the Copa America final with a 2-0 win over old rivals Argentina on Tuesday in a pulsating and, at times, bad-tempered match decided by a goal in each half from Gabriel Jesus and Roberto Firmino.

Both sides tried to impose themselves physically early on but it was Jesus who gave Brazil the lead after 19 minutes when Firmino sent in a low cross for the unmarked striker to side-foot home from close range.

The two combined again on the counterattack after 71 minutes to make it 2-0 after great work from Jesus left Firmino with the simplest of tap-ins.

Brazil, who have lost twice in 42 games under coach Tite, will face either Peru or Chile in Sunday’s final at the Maracana stadium in Rio de Janeiro and captain Dani Alves said their goal was within reach.

“There is one more step to go before we fulfil our objective,” he added.

“The standard here is very high there are no easy teams. You have to work and fight for what you want and we worked for this.”

Argentina have not beaten Brazil in a major competitive fixture dating back to 2005 and that run rarely looked like ending in front of 52,000 fans at the Mineirao stadium in Belo Horizonte.

Sergio Aguero hit the bar with a header in the first half and Lionel Messi struck the post 11 minutes into the second period but the visitors had little luck in front of goal and were never on top for any length of time.

While the tournament has been plagued by lengthy stoppages for the video assistant referee (VAR), Tuesday’s officials preferred to let the game run, though Argentina were incensed VAR did not come into play when Arthur felled one of their players at a corner.

Messi, who has still not won a major title with Argentina, was more influential than in his first few matches here but was still a pale shadow of the player who has won everything with his club side.

“We had chances, the ball hit the woodwork, it flashed across the six-yard box, there were penalties that weren’t given,” said Messi, who like coach Lionel Scaloni complained about the refereeing.

Argentina bow out after scoring just five goals in five games and are still looking for their first major title since lifting the Copa America in 1993.

“We knew that it would be difficult because of the players they have,” Brazil’s Casemiro said.

“It’s about details. We knew it would be scrappy and that there would be wind-ups and time wasting. But we have to congratulate our strikers who did a great job. When they got chances, they scored.”

India's Gaikwad hits seven sixes in one over
57 minutes ago