SINDHULI, Feb 21: The transportation system in the eastern Tarai and mid-hills has suffered a huge setback after a section of BP Highway in Shitalpati of Sindhuli district collapsed on Sunday night. Poor maintenance and weak construction of the highway have been blamed for the collapse.

The highway is an important infrastructural backbone connecting the two regions. About 45 meters of the highway stretch near Nepantar Danda in Shitalpati caved in and fell into the Sunkoshi River Sunday night, bringing transportation along the Dhulikhel-Sinduli-Bardibas stretch to a grinding halt. Thousands of passengers travelling along this route have been left stranded.

BP Highway was constructed with financial assistance from the government of Japan at the cost of about Rs 21.5 billion.

The highway, which took almost two decades to construct, was inaugurated two years ago by the then Minister for Physical Infrastructure and Transport Bimalendra Nidhi, who is currently the Minister for Home Affairs. At that time, a report submitted by the technical committee formed to study the highway had recommended not to allow heavy vehicles stating that the highway cannot withstand the load.

However, the report's suggestion was ignored and route permits were issued to heavy vehicles. A member of the committee said that the current destruction is the result of the bad decision to allow heavy vehicles on the highway.

"It is likely that the Khurkot-Nepalthok road section was weaker because it was constructed on a bed of stones, unlike the other sections which have reinforced concrete support," said a technician.

The catastrophic magnitude 7.8 earthquake of 2015 had also caused severe damage to various sections of the highway. The Road Project had repaired the damaged sections along the 29 km Sinduli Bazaar–Khurkhot section.

"However, 32 km Khurkot–Nepalthok section of the highway was ignored stating that the quake hadn't caused much damage there," said a technician of the Road Project. "And just a few days ago, a Japanese team had also expressed concerns stating that the road's condition needs to be examined to determine the damage done by the quake. But then, the road caved in before the examination could be done."

According to police, added pressures of vehicles in the narrow lanes of the highway could have contributed to the collapse. "The pressure on the highway is continually increasing.
About 1,200 vehicles apart from tippers and local buses operate from Kavre Bhanjyang police check post on a daily basis," informed Assistant Sub-Inspector Ram Narayan Shrestha. "This is almost double the number of vehicles plying through here last year."

According to Bharatkaji Devaju, chief of the Road Project, a technical team has reached the damaged road section to study the current situation. 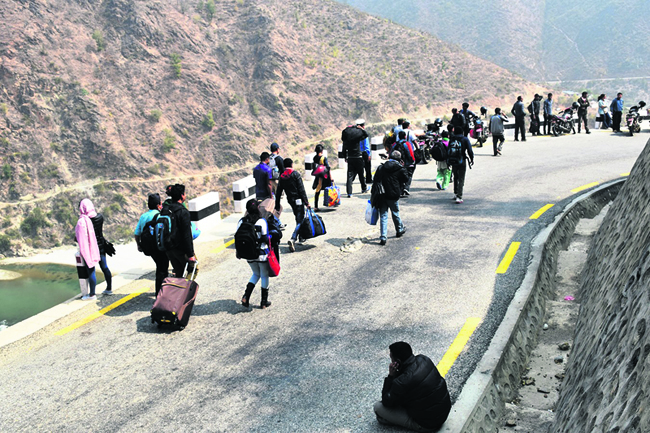 CHITWAN, March 28: Narayan-Mugling road section will remain closed for six hours daily until the next arrangement is made. ... Read More...

SINDHULI, Feb 20: A strip of the BP Highway along the Shitalpati section in Sindhuli has caved in and fallen... Read More...