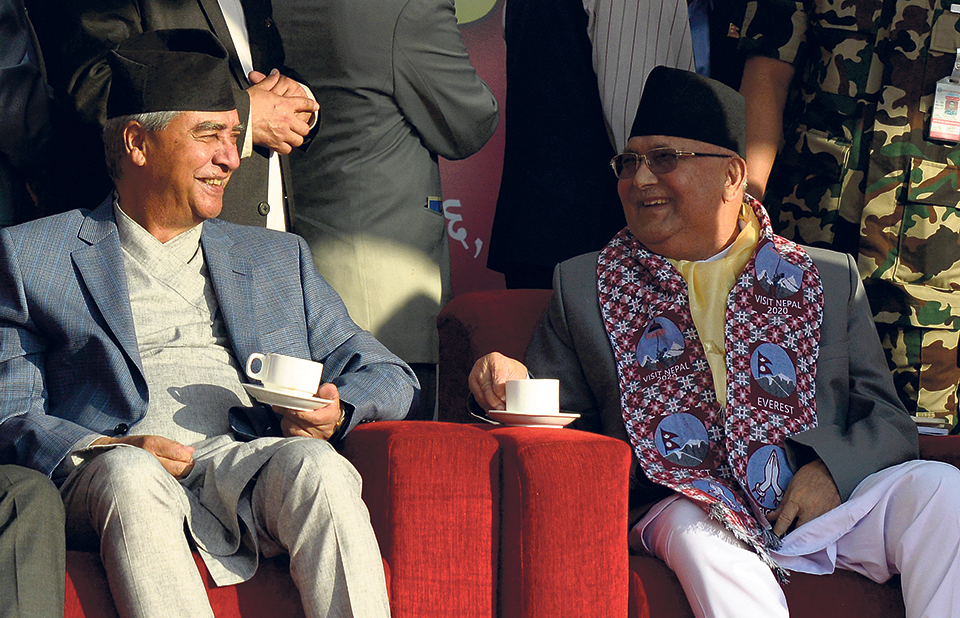 KATHMANDU, Oct 17: Prime Minister KP Oli has said both India and China are ready to extend support for the development of Nepal.

Without referring the recent Nepal visit of Chinese President Xi Jinping, Oli said that favorable situation has arrived to lead the country toward development and prosperity.

“We need a strong determination to build our country. Now we have favorable environment, our two giant neighbors are ready to help us in our movement for development,” said Prime Minister Oli.

Speaking at the tea-reception organized by the ruling Nepal Communist Party (NCP) on the occasions of Dashain, Tihar, Nepal Sambat and Chhath at the Bhrikuti Mandap exhibition grounds on Wednesday, Oli, who is also a co-chair of the party further reiterated that the government has been focusing on development and prosperity of the country.

Expressing ire against the critics, Oli claimed that the government’s achievements have not been appreciated. “Go and ask the elderly people if they feel improvements in their lives? The government has been working to improve the lives of the common people through development,” he claimed.

Extending wishes to the NCP leaders at the tea reception main opposition Nepali Congress (NC) President Sher Bahadur Deuba said that festivals bring the political forces in the country together. “Such receptions organized during the festive season provide good opportunity to bring the political parties together and renew their relations,” said Deuba.

NC senior leader Ram Chandra Paudel also said that the parties should work together to safeguard the past achievements.

Leaders from the ruling and opposition parties, diplomats, heads of constitutional commissions and bureaucrats had attended the tea-reception hosted by the NCP. But another co-chair of the party Pushpa Kamal Dahal left the reception early [at noon] after making a speech.