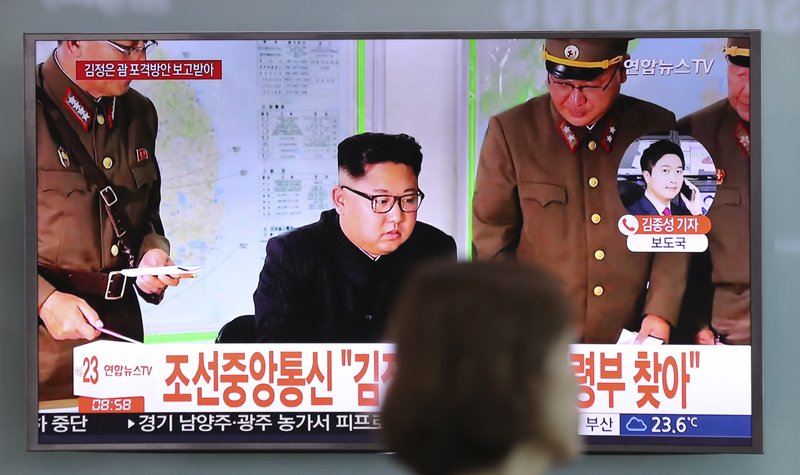 SEOUL, August 15: Even as North Korea presented leader Kim Jong Un with plans to launch missiles into waters near Guam and “wring the windpipes of the Yankees,” both Koreas and the United States signaled their willingness to avert a deepening crisis Tuesday, with each suggesting a path toward negotiations.

The tentative interest in diplomacy follows unusually combative threats between President Donald Trump and North Korea amid worries that Pyongyang is nearing its long-sought goal of accurately being able to send a nuclear missile to the U.S. mainland. Next week’s start of U.S.-South Korean military exercises that enrage the North each year make it unclear, however, if diplomacy will prevail.

During an inspection of the North Korean army’s Strategic Forces, which handles the missile program, Kim praised the military for drawing up a “close and careful plan” and said he would watch the “foolish and stupid conduct of the Yankees” a little more before deciding whether to order the missile test, the North’s state-run Korean Central News Agency said. Kim appeared in photos sitting at a table with a large map marked by a straight line between what appeared to be northeastern North Korea and Guam, and passing over Japan — apparently showing the missiles’ flight route.

The missile plans were previously announced, and Kim said North Korea would conduct the launches if the “Yankees persist in their extremely dangerous reckless actions on the Korean Peninsula and its vicinity” and that the United States should “think reasonably and judge properly” to avoid shaming itself, the news agency said.

Lobbing missiles toward Guam, a major U.S. military hub in the Pacific, would be a deeply provocative act from the U.S. perspective, and a miscalculation on either side could lead to a military clash. U.S. Defense Secretary Jim Mattis said the United Sates would take out any such missile seen to be heading for American soil and declared any such North Korean attack could mean war.

Kim’s comments, however, with their conditional tone, seemed to hold out the possibility that friction could ease if the United States made some sort of gesture that Pyongyang considered a move to back away from previous “extremely dangerous reckless actions.” This might be difficult as the United States and South Korea prepare for their military drills next week.

South Korean President Moon Jae-in, meanwhile, a liberal who favors engagement with the North, urged North Korea to stop provocations and to commit to talks over its nuclear weapons program.

Moon, in a televised speech Tuesday on the anniversary of the end of World War II and the Korean Peninsula’s liberation from Japanese colonial rule, said that Seoul and Washington agree that the crisis over the North’s nuclear program should “absolutely be solved peacefully,” and that no U.S. military action on the Korean Peninsula could be taken without Seoul’s consent.

Moon says solving the crisis could begin with freezing the North’s nuclear weapons program, and the North could create conditions for talks by stopping nuclear and missile tests.

“Our government will put everything on the line to prevent another war on the Korean Peninsula,” Moon. “Regardless of whatever twist and turns we could experience, the North Korean nuclear program should absolutely be solved peacefully, and the (South Korean) government and the U.S. government don’t have a different position on this.”

The chairman of the U.S. Joint Chiefs of Staff, Marine Corps Gen. Joseph Dunford, on Monday met with senior South Korean military and political officials and the local media, and made comments that appeared to be an attempt to ease anxiety while also showing a willingness to back Trump’s warnings if need be.

Dunford said the United States wants to peacefully resolve tensions with North Korea, but Washington is also ready to use the “full range” of its military capabilities in case of provocation.

Dunford is visiting South Korea, Japan and China after a week in which Trump declared the U.S. military “locked and loaded” and said he was ready to unleash “fire and fury” if North Korea continued to threaten the United States.

North Korea’s military had said last week it would finalize and send to Kim for approval the plan to fire four ballistic missiles near Guam, which is about 3,200 kilometers (2,000 miles) from Pyongyang.

The plans are based on the Hwasong-12, a new missile the country successfully flight-tested for the first time in May. The liquid-fuel missile is designed to be fired from road mobile launchers and has been previously described by North Korea as built for attacking Alaska and Hawaii.

The North followed the May launch with two flight tests of its Hwasong-14 ICBM last month. Analysts said that a wide swath of the continental United States, including Los Angeles and Chicago, could be within reach of those missiles, once they’re perfected.

The North’s latest report said Kim ordered his military to be prepared to launch the missiles toward Guam at any time. If the “planned fire of power demonstration” is carried out because of U.S. recklessness, Kim said it will be “the most delightful historic moment when the Hwasong artillerymen will wring the windpipes of the Yankees and point daggers at their necks,” the North reported.

North Korea is angry about new United Nations sanctions over its expanding nuclear weapons and missile program and the upcoming military drills between Washington and Seoul.

Kim said that the United States must “make a proper option first and show it through action, as it committed provocations after introducing huge nuclear strategic equipment into the vicinity of the peninsula” and that it “should stop at once arrogant provocations” against North Korea, state media said.

Price of gold declines
10 minutes ago