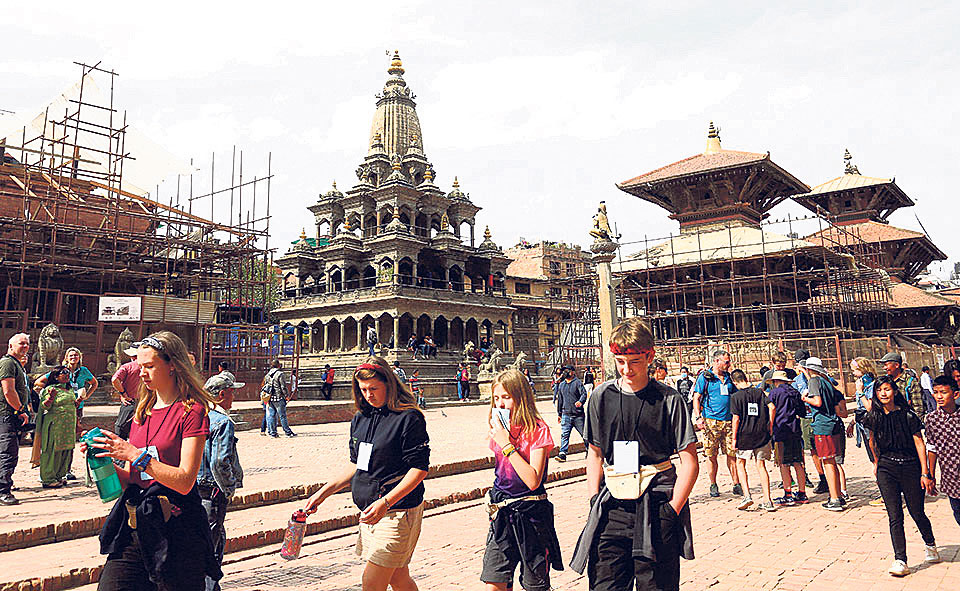 Visit Nepal 2020 mega campaign kicked off with fanfare in December last year. It ended as a one-time ritual, just as unattended plantation of vegetation at Tinkune and blacktopping a few kilometers of already passable roads in rapidity, spending millions of rupees like water to impress Chinese President Xi Jinping during his October visit to Kathmandu last year.

Geo-tectonically, the Himalayan orogeny took place some 60 million years ago bestowing Nepal with the highest mountains and glaciers in the world including Sagarmatha (Mt Everest). The origin of most ancient largest Vedic scripture, Mahabharata as mentioned in the Skanda Puran was written by Vedabyas in Byas Cave, and Ramayana by Valmiki in Valmiki hermitage in Nepal. “Mother and motherland are greater and more sacred than heaven” is emblazoned on the red banner of Nepal’s national emblem, which is derived from the Vedic literature of Ramayana. The immaculate beauty of Nepal mesmerizes millions of international travelers and tourists just as the richness of a stirring history, multi-culture, religion, diverse castes and ethnicities, religious pilgrimages, architecture, and ancient temples of Lord Pashupatinath and the birth places of Buddha and Janaki (Hindu Goddess), to name a few. Nepal is home to already ten UNESCO World Heritage sites.

Setbacks and impediments
Coronavirus outbreak, as identified by the Prime Minister in his deliberation in the House of Representatives as a shocking blow (dhakka), maybe a threat, however temporarily, to the anticipated Chinese tourist boom of 350,000 arrivals during Visit Nepal 2020. Chinese tourists shared 10.45 percent of the total 1.19 million (via air 995,884) tourists arriving in Nepal, a second highest after India in 2019. However, the slowdown trend that has crept from the previous years may not meet the target of two million visitors in 2020. China has 1.4 billion population and 130 million Chinese tourists travelled overseas in 2017 and spent an estimated $115.29 billion, a year-on-year increase of five percent. China remains the largest source of outbound tourists in the world, and therefore it can be one of the largest contributors in Nepal’s tourism economy.

Tourism development is critical to Nepal’s frail economy. Any geo-political turmoil, war or civil war can wreck country’s overall development including tourism. A number of wars torn apart countries in West Asia, Central Africa and North Africa due to years of foreign strategic interference and they have become the victims of irreparable loss of lives and property and infrastructures. Syria and Iraq are glaring examples. Nepal already underwent decade-long Maoist insurgency which killed 17,000 people and sabotaged billions of rupees worth infrastructures. The institution of monarchy was abolished. Analysts suspect that external intrusion, however indirect, also had a major role in the whole conflict and political transition process. Transitional justice is still in limbo and the corruption suspects of huge amount of funds embezzlement and those who misused power and authority are not yet put to trial. Apparently, Nepal’s involvement in external strategic alliance or conflict, which can be directed to other nation(s), may jeopardize its embryonic phase of development, progress and prosperity initiatives including tourism growth.

The Prime Minister of ruling Nepal Communist Party (NCP) and opposition Nepali Congress (NC) President in ‘unison’ have advocated approving the Millennium Challenge Corporation (MCC) grant, an Indo-Pacific Strategy Pact of the US government, at a critical situation when there have been constructive criticisms and feedback coming from the civil society at large, including lawmakers and the Central Committee Members of NCP, that the pact is aimed at countering China. Moreover, the conditions of MCC pact are lopsided and ambiguous and violate Nepal’s laws and constitution. It may also be reviewed in the context that the Tibetan independence movement is principally led by the Tibetan Diasporas in countries like India and the United States, and by celebrities and Tibetan Buddhists in the United States, India and Europe.

At this juncture, Nepal may find useful also to learn from Sri Lankan experience where US aid scheme has lately sparked debate and critics argue that the MCC’s primary commitment is not to poverty reduction but to “reshape the legal, institutional, infrastructural and financial contexts of poorer countries to better suit US economic interests” and an instrument of the new imperialism pursuing “economic hegemony through the extension and ever-deepening penetration of neoliberal capitalism.” Also, the Prime Minister of Sri Lanka has appointed a special committee to comprehensively study the MCC development assistance grant and report to the government.

China’s Belt and Road Initiative (BRI) connectivity strategic plan is believed to serve as a critical bridge between China-Nepal-India, where Nepal can become a regional hub for the Asian region due to its geographical location for boosting tourism. China, next door neighbor and partner, the second giant economy and military-wise powerful country globally, has been critically and relatively important and can play an instrumental role in Nepal’s infrastructures development desperately needed for tourism growth.

Nepal’s tourism development sector has been the victim of mismanagement, misgovernance, nonperformance and political and bureaucratic flaws. Thai Airways, now world’s top 10 Airlines of 2019, which was established in 1960, two years after the establishment of Nepal Airlines, is already doing 100 times better than Nepal Airlines in all dimensions. Thai Airways already flies to 84 destinations in 37 countries, using a fleet of over 90 jet aircrafts. Nepal Airlines fleet goes to less than 10 destinations with only a total of four jet aircrafts. Thai Airways can be one of the ‘bench marks’ for Nepal government to learn for improvement.

Satisfy the tourists
Focus should be on satisfying the tourists with efficient and qualitative services availed consistently across Nepal so that they would love to visit again also become the finest promoters and educators to their peers abroad creating a multiplier effects in tourism growth. Only dumping or venturing out the responsibility of tourism growth and development to the private sector and the government not becoming the “doer” cannot be the solution, as it is happening in spite of transitioning into a federal system of government. It is the primary duty of the federal and provincial governments and their line agencies including Nepal’s diplomatic mission (ambassadors) stationed abroad not to sit hands-folded in ‘comfort zone’ but act. Seeking excessive foreign aid and loan assistance, and often not even becoming judicious and selective, may desist ruling party and the government from exercising their self-initiative and sincere hard work in planning, implementation and monitoring until time-bound completion with no cost overrun, taking ownership and accountability, for a holistic development including tourism growth in rapidity.

KATHMANDU, March 11: Nepal has placed a ban on taking pictures of other climbers and circulating them on the internet... Read More...

KATHMANDU, Dec 8: The height of Mount Sagarmatha, world’s highest peak has not decreased from its current height of 8,848... Read More...

KATHMANDU, Dec 7: Nepal and China are set to jointly announce the height of Sagarmatha on Tuesday. ... Read More...