“Encouraging creativity in your child doesn’t necessarily mean you will be the parent of a potential billionaire or a future class topper,” says Pranjali Singh, program coordinator at Nepal Children’s Art Museum (NCAM). But still she considers the incentives for parents to take on the task to be more than worth it.

Simply put, creativity isn’t only what children use to write stories, solve problems, play music, and make arts and crafts. Creativity is being able to think of new ideas so Singh explains, “Encouraging creativity means you are helping develop your child’s character. It’s about giving him or her the chance to gain a wider perspective, so that later on in life they will have the luxury of not following the crowd. Instead, they can be their own person.”

So if incase as a parent or even a teacher, you too are interested in joining this endeavor, do read on. We all know books, music, art and extracurricular activities all help but Singh gives us more.
She shares her expertise and firsthand experiences using these mediums at NCAM.

Realize the significant role that you play and play it well.

To begin with, parents and teachers alike must put in the effort to create a supportive environment where their children will not only be comfortable to express themselves but also feel safe enough to make mistakes. A child with high self-esteem is confident to try new things and believes in his own ability to be creative. Value their efforts and give them plenty of encouragement at every step. And when we say every step, we mean it. There will be plenty of times when you too will need to come up with creative ways to help them.

While running her classes, Singh shares that it’s common for things to not go according to the plan.

“We had an hour long workshop that involved a lot of artwork but there was a girl student who flat out refused to draw. She said she didn’t know how to so she couldn’t. But we obviously didn’t want her to dismiss herself like that. So, I brought this book from our library and quickly read it to her. It’s called ‘Dots’ and it features a story of a student who too thinks he can’t draw. When the teacher insists on it though, he gets angry, draws a small dot and just chucks it at her desk. When he returns to school the next day though, he is amazed to see that his dot too has been framed on the wall, along with his other classmates’ artworks. He ends up being so motivated that he draws a series of dots. Big dots, small dots, random dots, all of his artworks from then are dots. When we finished reading this story, our student too agreed to start with dots. She filled her paper with it. Every now and then, our kids do need a little push.”

To start off, Singh shares that every now and then, they do randomly suggest such a thing in their workshops and while some kids are game for it, there are also many who respond with an incredulous no. Often they explain that they can’t imagine that ever happening, so don’t see the point in trying either. Singh laments about these instances because it shows how we end up teaching our children to be stereotypical. And sometimes it’s to such an extent that they immediately categorize things that are “different” as a mistake.

With their workshops and classes at NCAM, she and her team want to encourage the kids to have an open-minded approach to everything.

Art obviously happens to be one of the main mediums that help them accomplish this. Singh shares that they have made it a point to fill NCAM with many art books. Also these aren’t kid’s art books, these are books that college students read. They use these books to introduce the kids to works of various artists and genres. From Picasso to Pop art, they have it all covered.

“It’s all about exposure,” says Singh. “Small steps to break the conventional stereotypes. For example, if somebody was to draw my face, most Nepalis would consider the classical pencil sketches to be the best. It’s what we know and consider art. But there are works, for example famous artists like Salvodar Dali, where everything in his paintings is in the process of melting away. Being familiar with such work lets them know that they too can experiment. They don’t have to be constrained.

Every now and then, we have kids who ridicule their peers’ artwork because it isn’t up to the standard. But we are hoping these exposures to different art forms will help them be acceptable of things that are different. Perhaps as they grow up they will be able to apply this attitude socially and professionally as well.”

Embrace the gibberish
One of the most effective tactics at the art sessions in NCAM is the ‘unavailable eraser’ solution. Singh shares that they don’t often give their kids erasers while they sit to draw and they try to discourage its use as much as possible. As per the rule, teachers only hand out the erasers when the student is completely certain that there is no way out and has asked for it three times.

“When you erase something, you are stopping something you had started. You are putting a stop to an idea. It’s a bit of a creative challenge to find a way to give it continuation,” explains Singh.
She also adds, that most times, encouraging creativity in children means accepting some gibberish as well.

“We read a lot of Dr Seuss books. Unfortunately most Nepali children haven’t heard of it. But his simple stories and poems tend to have some really important life lessons. Though, interestingly enough, they are not always that clear. Dr Seuss leaves many things open to interpretation especially when it comes to his limericks and we encourage kids to play around with such rhymes as well. We regularly ask different batches to come up with similar things.

But they find it so hard. Even when we specifically tell them to just try, that we don’t mind, if their work doesn’t turn out correct, it’s so difficult for them to start. This is the case with both writing and art. So helping them explore their abilities this way turns into an exercise itself.

Especially with art, I remember there was this one kid, who was continuously erasing what he was drawing. He kept complaining that it wasn’t good enough. So, we told him, this “ish” story. It’s this really sweet story of a boy who immensely loved drawing but couldn’t really draw very well. Even simple things like a tree, house or fish didn’t turn out right. But instead of being discouraged, he decides to call it all “ish”. So even though it doesn’t look like a tree, it was okay. He labeled it tree-ish, house-ish, fish-ish.

This encourages them to begin and, most importantly, not be afraid to make mistakes.

Creativity is only not with paper and pencil. Spot the opportunities.

Singh apparently sees it all the time. Even though parents tend to be motivated by good intentions, they don’t want their children to cause any trouble or be in the way of any harm. However, in this way they also unwittingly end up restricting their child’s exposure. Whether it is forbidding their kids from entering the kitchen or not touching valuables like the cameras or musical instruments around the house, these could very well be lost opportunities to expand your child’s horizons.

“The right thing to do here is supervise the kids. It’s rather unfair to suppress their curiosities and interests. This may take effort and time on the teacher’s part but it does prove to be beneficial to the child,” says Singh. While reading Roald Dahl’s book George’s Marvelous Medicine for instance, we taught six and seven year olds about chemical reaction. We used dishwasher, vinegar, baking soda and other ingredients you can find at home. The kids too recognized some of the materials but they obviously weren’t allowed to use them. They probably would get a scolding if they did. But that workshop was such a success. We had these kids trying to figure out the reasons behind the color change, and the lathery froth. They were learning a lot.

Similarly, kids really enjoy playing around the kitchen. We don’t use store bought play dough because it has chemicals in it. We make our own natural play dough with natural powder, food color, oil etc. Kids and even toddlers just love getting involved in the whole process, kneading, and mixing it all. It’s best not to dismiss kids’ ability to help out.

So whether it is regular chores like cleaning or activities like gardening and baking, it’s highly recommended to get your children involved.

(As told to Priyanka Gurung) 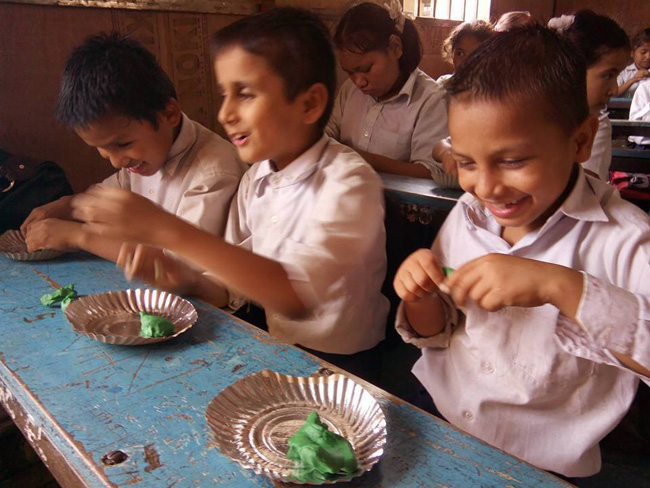 How to raise creative children

During these long hot summer days staying inside doing nothing is becoming a problem. You cannot go out because there... Read More...

Once upon a time..." Just the sound of these words is enough for children and adults to get a special... Read More...

KATHMANDU, May 23: It is not surprising to see a teenager or anyone in their early twenties to hover around their... Read More...