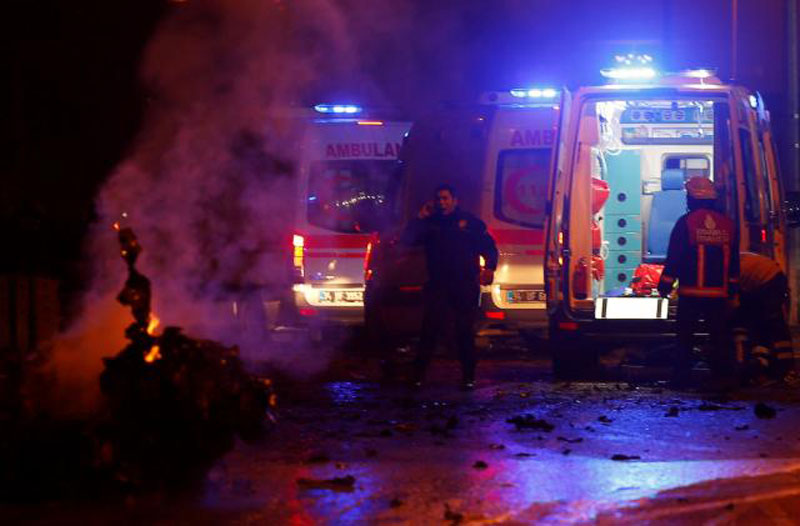 Police and ambulances arrive the scene after a blast in Istanbul, Turkey, December 10, 2016. (Reuters)

ISTANBUL, Dec 11: The Latest on the twin explosions near an Istanbul soccer stadium (all times local):

Turkey's Interior Minister Suleyman Soylu said the death toll from twin blasts near an Istanbul stadium had risen to 38.

He said the figure included 30 police officers, seven civilians and one more person whose identity had yet to be determined.

The minister also put the number of wounded at 155 and said a total of 13 suspects had been detained in connection with the attack Saturday night.

Soylu says 136 people are still hospitalized from the attack, 14 of them in intensive care and five undergoing surgery.

Turkey's pro-Kurdish People's Democratic Party, or HDP, has condemned the attack in Istanbul near a soccer stadium that left 29 dead and 166 wounded.

The party's central executive committee released a statement on Sunday "strongly condemning" the attacks and saying it "felt great sadness and shared in the sorrow."

The statement added: "In both domestic and foreign policy, Turkey must be a model and more importantly a political actor of peace, democracy and human rights. It is essential that the politics, language, tone and practices that causes tension, polarization, enmity and clashes immediately cease."

There has been no immediate claim of responsibility for the Saturday night attack by a car bomber and a suicide bomber. This year Istanbul has witnessed a spate of attacks attributed by authorities to the Islamic State group or claimed by Kurdish militants. A state of emergency is in force following a failed July 15 coup attempt.

Turkey's state-run Anadolu Agency says 19 of the 166 people wounded in twin blasts near a soccer stadium in Istanbul are in intensive care.

Quoting sources Sunday in the office of the Istanbul governor, it says 155 others are also still receiving medical treatment after the blasts Saturday night.

Attacks Saturday night by a car bomber and a suicide bomber near Istanbul's Besiktas soccer stadium were the latest large-scale assault to traumatize a nation confronting an array of security threats. There was no immediate claim of responsibility.

Turkey declared a day of national mourning on Sunday, after two bombs killed 29 people and wounded 166 others in a coordinated attack on police outside a soccer stadium in Istanbul after a match between two top teams.

The blasts on Saturday night - a car bomb outside the Vodafone Arena home to Istanbul's Besiktas soccer team followed by a suicide bomb attack in an adjacent park less than a minute later - shook a soccer-mad nation still trying to recover from a series of deadly bombing this year in cities including Istanbul and the capital Ankara.

President Tayyip Erdogan canceled a planned trip to Kazakhstan, his office said. Erdogan described the blasts as a terrorist attack on police and civilians. He said the aim of the bombings, two hours after the end of a match attended by thousands of people, had been to cause the maximum number of casualties.

"Nobody should doubt that with God's will, we as a country and a nation will overcome terror, terrorist organizations ...and the forces behind them," he said in a statement.

There was no immediate claim of responsibility. The Islamic State jihadist group has been blamed for some bombings in Turkey this year, while others have been claimed by Kurdish militants. The blasts came less than a week after Islamic State urged its supporters to target Turkey's "security, military, economic and media establishment".

"It was like hell. The flames went all the way up to the sky. I was drinking tea at the cafe next to the mosque," said Omer Yilmaz, who works as a cleaner at the nearby Dolmabahce mosque, directly across the road from the stadium.

"People ducked under the tables, women began crying. Football fans drinking tea at the cafe sought shelter, it was horrible," he told Reuters.

Turkey is a member of the NATO military alliance and part of the U.S.-led coalition against Islamic State. It launched a military incursion into Syria in August against the ultra-hardline Islamist group. It is also fighting a Kurdish militant insurgency in its own southeast.

Interior Minister Suleyman Soylu said the first explosion, which came around two hours after the end of the match betweenBesiktas and Bursaspor, was at an assembly point for riot police officers. The second came as police surrounded the suicide bomber in the nearby Macka park.

Two of those killed in the blasts were civilians. The other 27 were police officers, including a police chief and another senior officer, Soylu said. He said 17 of the wounded were undergoing surgery and another six were in intensive care.

Soylu said evidence gathered from the detonated vehicle had led to 10 arrests, but gave no indication of who the authorities thought might be behind the attack.

A Reuters photographer said many riot police officers were seriously wounded. Armed police sealed off streets. A police water cannon doused the wreckage of a burned-out car and there were two separate fires on the road outside the stadium.

Bursaspor said none of its fans appeared to have been injured. Both it and Besiktas condemned the bombings.

NATO Secretary General Jens Stoltenberg condemned what he described as "horrific acts of terror", while European leaders also sent messages of solidarity. The United States condemned the attack and said it stood with its NATO ally.

The bombings come five months after Turkey was shaken by a failed military coup, in which more than 240 people were killed, many of them in Istanbul, as rogue soldiers commandeered tanks and fighter jets in a bid to seize power.

Istanbul has seen several other attacks this year, including in June, when around 45 people were killed and hundreds wounded as three suspected Islamic State militants carried out a gun and bomb attack on its main Ataturk airport.

Death toll in Afghan base attack rises to 140, officials say

MAZAR-I-SHARIF/KABUL, April 22: As many as 140 Afghan soldiers were killed on Friday by Taliban attackers apparently disguised in military uniforms... Read More...

Expansion of financial access a must for economic development in Province-1: NRB study
1 minute ago

EU, UNFPA announce to continue their collaboration to combat GBV in Nepal as their two-year project concludes
3 minutes ago