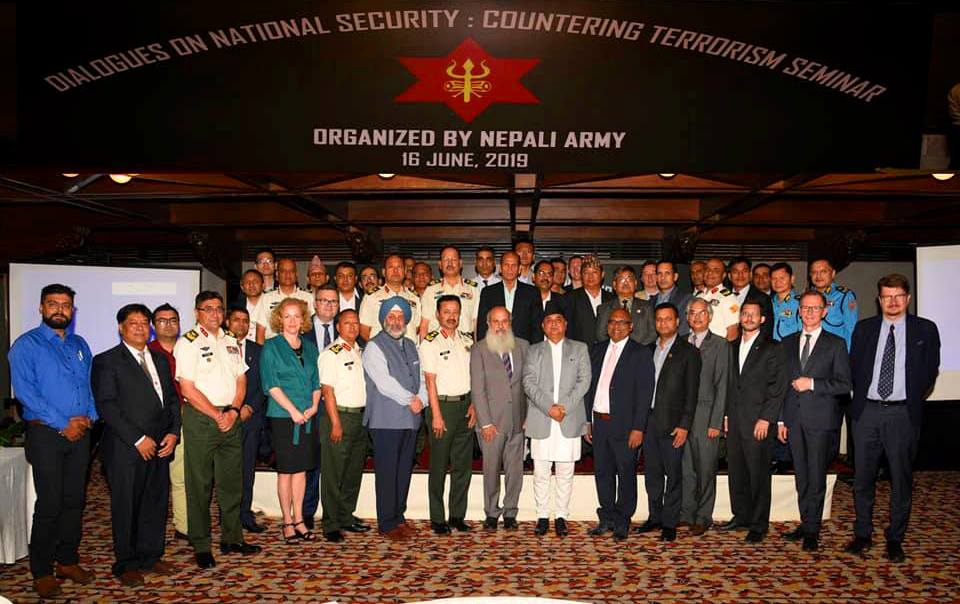 The minister said so while addressing a seminar titled 'Dialogues on Public Security: Countering Terrorism' organized by Nepal Army in Kathmandu on Sunday.

"We have witnessed terrorist attacks on innocent civilians in many parts of the world and we have been saddened by those attacks. The Easter Sunday bombing attacks this April in Sri Lanka sent a clear and strong message that a new type of terrorism threat has arrived in South Asia," he said at the presence of ministers, foreign diplomats and top military officers.

In April, Multiple terror attacks struck churches and luxury hotels in Sri Lanka killing at least 250 people and injuring hundreds of others.

Pokhrel said that the government thinks it is very important to understand the complex phenomenon of terrorism in regional and national contexts. "We also think that we need to learn from the lessons and experiences of our friend around the world, on counter terrorism," he said.

The minister noted that many security threats are cross-cutting and unconventional in nature in this century.

"They are neither limited by national boundaries nor dealt with by conventional warfare. The worst of these threats to challenge humanity and global security is terrorism," he viewed.

Pokhrel said that the geostrategic location of Nepal and the security concerns of neighbors and other friendly countries are also compelling reasons for the Nepal government to work carefully and collaboratively to counter terrorism.

The minister said that the government recognizes domestic, regional, and international efforts are needed to address the problem of counter-terrorism.  "We know from our limited experience in Nepal that terrorism does not discriminate…. and the innocents suffer the most," he said.

Talking about recently-unveiled National Security Policy introduced by the government, the minister said that it was brought reflect the changing security environment.

"We are in the process of formulating the necessary instruments and architecture to implement the Security Policy. It will be useful for us to learn how developed countries have created institutional arrangements to counter these emerging threats. These will help us develop our own policy, plans, and capacity building," he said.

The government identified terrorism as a challenge to national security, he said.

"I would like to advise all concerned to give appropriate emphasis to counter terrorism in National Security policies and activities. The security environment demands that our agencies work together as a team, beyond passive coordination to active cooperation. I assure you that the government has the will and is prepared to do whatever is necessary to set up the institutional structure for national security to deal with all the threats including terrorism," he said.

He also called on the international community to assist Nepal in meeting the challenge of securing the country's national interests.

"Through the past several years of political turmoil and change, Nepal’s core security agencies have maintained security and kept our citizens safe. We will continue to take this responsibility seriously. Today’s event reflects our concern with the evolving nature of national security and our desire to exchange views with colleagues, experts, and friends," he said.

Saying that safeguarding of national interest is the cornerstone of the foundations of governance for any nation, he said that the Constitution of Nepal has indicated the necessity and importance of National Security in this context.

"In the past few decades, we have broadened our understanding of National Security issues from the conventional to the unconventional. The constitution also reflects this understanding," he added.