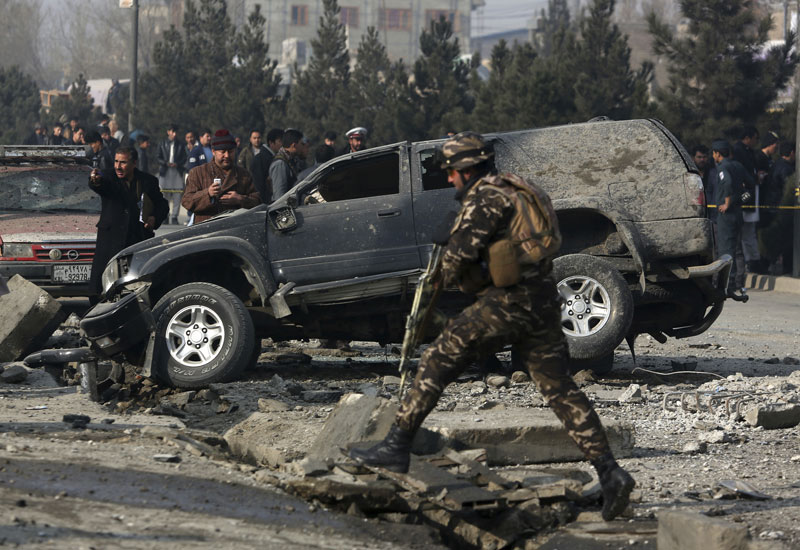 PESHAWAR, Pakistan, Jan 21:  A bomb exploded Saturday in a market in a northwest tribal region that borders Afghanistan, killing 20 people and wounding at least 50, officials said.

Shahid Khan, an assistant tribal administrator, said the explosion took place when the market was crowded with retailers buying fruits and vegetables from a wholesale shop. He said the attack was being investigated.

Lashker-e-Jhangvi, a banned sectarian militant group that has attacked minority Shiites Muslims in the past, claimed responsibility for the attack. The bombing took place in a predominantly Shiite area of Kurram, which has seen attack by Sunni militants who have hideouts there. Shiites are a minority in Pakistan.

"That was our combined work with Shahryar group of Mahsud Taliban," Ali Sufyan, a spokesman for the banned group, wrote in a text message to an AP reporter.

Kurram has been the scene of increased militant activities in recent years and the Army carried out a massive operation against extremists in the region but they still have the capacity to strike.

Khan said some of the wounded would be airlifted to hospitals in Peshawar, the capital of northwestern Khyber Pakhtunkhwa province. Hospitals in tribal regions and rural areas of Pakistan typically are not equipped to handle such emergencies.

Ashiq Hussain, who was lightly wounded, was being treated in Parachinar hospital. He said he was among the people purchasing fruits and vegetables loaded on a van when the explosion took place. "There was a big bang and I saw a dark cloud of smoke and dust before passing out," he said.

Ashiq Hussain said he saw bleeding bodies and severed limbs and heard cries when he came back to his senses. "I was just bleeding from my leg," he said. "Thank God I am alive."

Initially, seven people were brought dead from the vegetable market blast site and more than 60 wounded, according to Dr. Hussain. Eleven of the critically wounded died earlier while being treated, he said.

Shiite leader Faqir Hussain said all the bodies were brought to a Shiite mosque.

Iqbal Zafar Jhagra, the provincial governor, told local Geo television that the remnants of militant groups targeted by security forces were trying to show their existence by such attacks.

"Terrorists largely eliminated by our security forces and the remaining will soon meet their fate if we all together rise against them," he said.

1,614 more people test positive for COVID-19 on Thursday as Nepal carries out a total of 9,491 PCR tests
48 minutes ago
'Green pigeon' spotted in Jhapa
3 hours ago