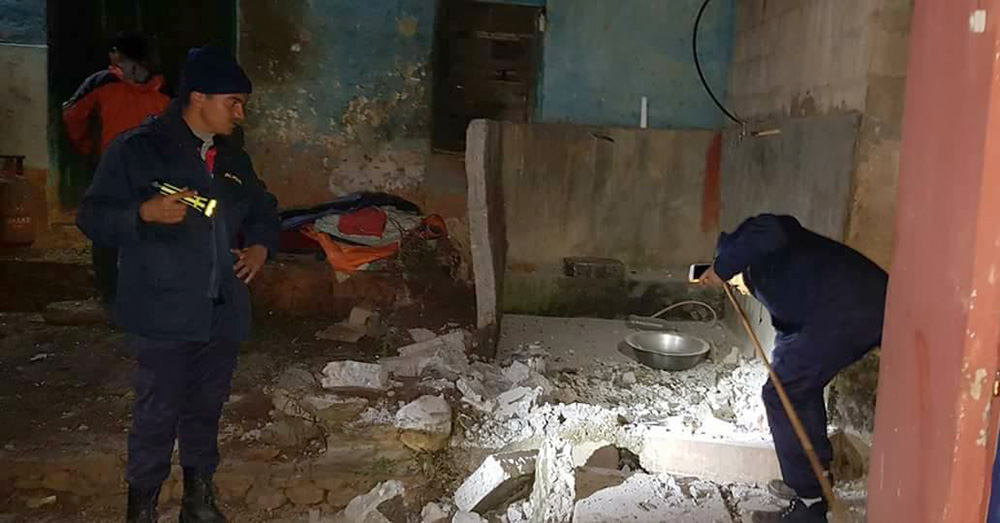 BAGLUNG, Nov 22: A bomb exploded in the residence of Champadevi Khadka, minister for cooperatives and poverty alleviation, on Monday. The candidate for the upcoming House of Representatives election lives in Laligurans Chowk in Baglung-2.

The bomb exploded in the ground floor causing the walls of the house to collapse. But no human casualties have been reported. Though the cadres of Netra Bikram Chand-led Communist Party of Nepal (CPN) have been suspected behind the attack, it is yet to be confirmed.

According to DSP Bishwaraj Singh Thapa, spokesperson of the District Police Office, Baglung, the attack was not aimed at killing anyone but just for terrorizing the people.
"It is not right to accuse anyone at this point of time as we are yet to find out the culprits," DSP Thapa said.

Security has been tightened in the area to foil anti-election activities. After the incident, State Minister Khadka posted a Facebook status stating that such attacks are not going to stop the fight for democracy and women's rights. In Baglung alone, two bombs have been exploded while one was defused by army personnel.

Meanwhile, a bomb disposal team of the Nepalese Army defused a bomb planted by an unidentified group behind the house of Minister for Forests and Soil Conservation, Bikram Pandey, at Bharatpur Metropolitan City-2 on Tuesday.

As informed by DSP Prabhu Prasad Dhakal of the District Police Office (DPO),  Chitwan, the army squad deactivated a grenade kept inside a milk can which was placed behind Minister Pandey's house.

Locals immediately informed the police after spotting the bomb behind the minister's house. Minister Pandey is contesting the parliamentary elections from Chitwan's constituency-3.  The series of attacks on election candidates and political leaders have raised serious concerns over the week.

BAGLUNG, Nov 21: A bomb exploded in the residence of Champadevi Khadka, minister for cooperatives and poverty alleviation, on Monday. The... Read More...