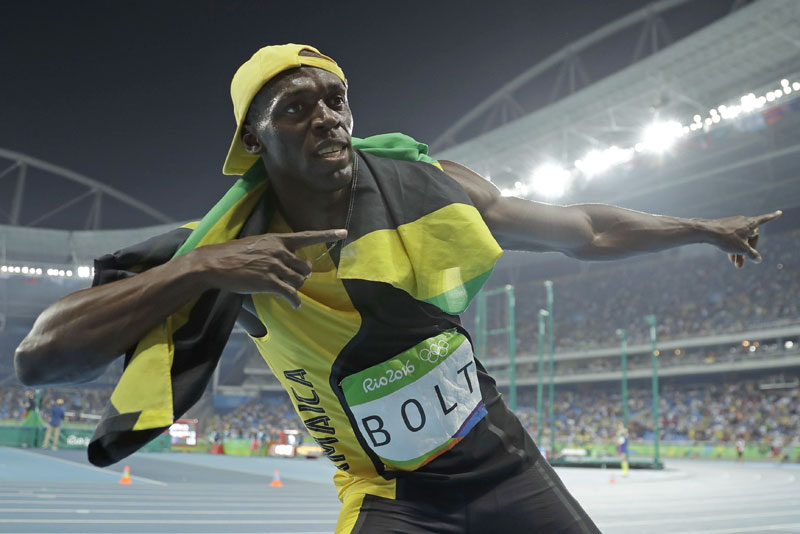 RIO DE JANEIRO, Aug 15: Usain Bolt sauntered onto the track, stretched out his arms and waved his hands, signaling for more applause.

He knew exactly how this night was going to go.

The sprinter-turned-showman's swan song in the Olympic 100 meters Sunday night was a no-doubter — a pedestrian-by-his-standards 9.81-second sprint down the straightaway, but not so slow that he couldn't take time to point at his own chest with his thumb a step before he crossed the finish line.

He won his record-setting third straight title in track's featured event and his seventh Olympic gold.

He has already swept aside pretty much every sprinter who had any claim on being the greatest.

So, on a muggy night in Rio, Bolt took aim at Michael Phelps and the Olympics themselves, shoving the swimmer and all his 23 medals to the background and making this official: The Bolt Games have begun.

"I told you guys I wanted to set myself apart from everybody else," Bolt said. "This is the Olympics that I have to do it at."

Bolt beat American Justin Gatlin, who was greeted by the fans with raucous boos, by .08 seconds. Andre de Grasse of Canada took the bronze.

Bolt has a chance for two more golds — in his favorite race, Thursday's 200 final, where he has pronounced he'll be gunning for the world record, then the 4x100 relay Saturday night.

Speaking of world records — a few minutes before Bolt's race, world champion Wayde van Niekerk of South Africa eclipsed what many thought was the most-unbreakable mark in the book — Michael Johnson's 17-year-old run of 43.18 seconds in 400 meters.

Running out of Lane 8, where the lag puts him well in front of the rest of the field, van Niekerk never saw a soul — crossing in 43.03 and only glancing to his left when he approached the line to peer at the clock, which showed him what he had done.

"Usain Bolt will be retiring soon, but this could be the next star of the sport," Johnson said during his commentary on BBC.

But Bolt isn't done quite yet.

The 6-foot-5 sprinter/celebrity overcame his typically slow unfurling from the blocks — he was second-to-last after the break.

Churning his legs to gradually build up speed, he eventually caught Gatlin with about 40 meters left and took it to warp speed. The rest was a matter of how hard he wanted to run to the line.

"From the start, really," Bolt said, when asked when he knew he was going to win. "When I got going, got to about 50 meters, I was all right. I could tell I was going to catch him."

Gatlin made Bolt work for it, the way he has for the past four years. He said the short turnaround between the semifinal and final sapped his strength, and Bolt agreed.

"First time we've had to jog to the warmup area to get ready for the final," Bolt said.

Gatlin finished with silver to go with his 2004 gold and 2102 bronze and, at 34, became the oldest man to win a medal in a non-relay sprint.

And while Bolt was celebrating with anyone he could find, Gatlin was parading the American flag around the track virtually alone. The boos from the Brazilian crowd were the latest ugly chapter in Gatlin's saga. He's been punished for doping twice. His last ban ended in 2010. But fans in the stadium bought into the "Good vs. Evil" story line that's been pitched by the media for all these years, and they let the American have it.

"We all have respect for each other," Gatlin said of himself and his fellow competitors. "I'd like to see everyone have respect in the audience, as well."

A split-second after Bolt crossed the line, he raised the index finger, and then, the real party began.

Bolt unlaced his now-famous gold spikes and took selfies with the fans. He turned his yellow hat backward, kneeled down and gave the crowd what it really wanted — that famous, arching, "To the World" pose that he debuted eight years ago in Beijing.

Chants of "Bolt, Bolt, Bolt" rang out from the near-capacity stadium. Yes, the show lived up to its billing.

But this was not Bolt at his fastest. Four years ago, all three medalists broke 9.8. Nobody did this time, and neither Bolt's world record from 2009 (9.58) nor his Olympic record from London (9.63) were ever in jeopardy.

It was not Bolt at his toughest. Some might argue his gutsy effort at last year's world championships, when he overcame a season's worth of injuries to beat Gatlin by .01, might have been the grittiest race he has won.

But it certainly took hard work. Before the Olympics, Bolt hadn't run a 100 since June 30, when he pulled out of Jamaica's national championships with injuries to his left hamstring.

The rehab started immediately, with trips to Germany to see his doctor, then a warm-up 200 in London to prove to his Olympic committee that he was fit for the Olympics. Shortly after he arrived in Rio, he conceded that, yes, he wished he'd had more chances to run in real races, but that everything would be OK.

It was better than that. From the moments before he crouched into the blocks, putting his finger to his lips and asking for silence, until long after the race, when he worked the crowd and posed for photos, Bolt made the troubled world of track feel fun again.

He turns 30 the day of the closing ceremony and has insisted his Olympic days are over.

"Somebody said I can become immortal," Bolt said. "Two more medals to go and I can sign off. Immortal."