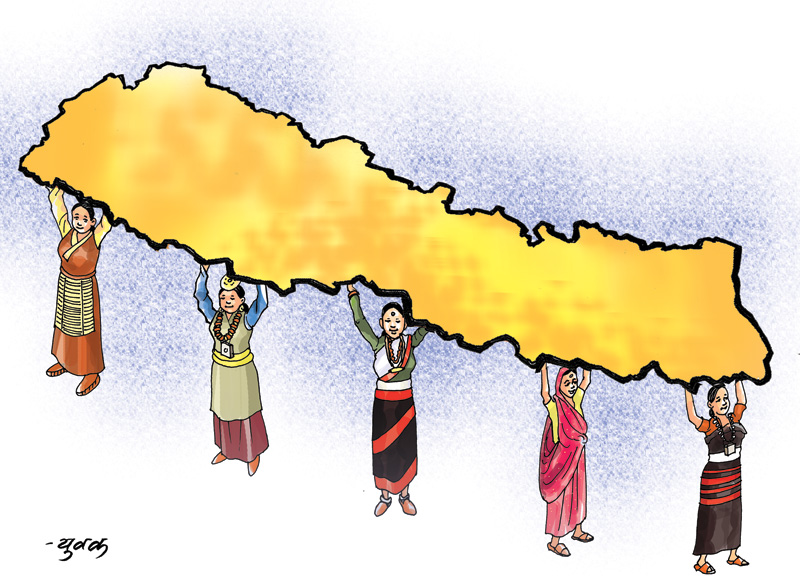 In Nepal, while women work as much as men, the gender wage gap is still in the bottom half of the world ranking
Women drive the economy in Nepal. They work in both unpaid and paid labor pools, and yet, they wield the least amount of power and have the fewest opportunities. In its race toward sustainable development, Nepal must not rely only on policy and laws, but take bold action to equal the economic playing field.

On International Women’s Day, the UN in Nepal recognizes the importance of shifting ideas and beliefs that prevent women from fully realizing their role and valuable contribution to sustainable development. One large piece of this puzzle is the economic empowerment of women, which makes sense, in business, in human rights, and in development.

Women’s paid work in Nepal is overwhelmingly in the agricultural sector, and many of those women lack access to education, healthcare, and economic mobility. Women in other work lack job security, decent wages, and protections against sexual violence. But when women are economically empowered, adequately trained and educated, everyone benefits; no one is left behind.

The gender wage gap is persistently wide. In Nepal, while women work as much as men, the gender wage gap is still in the bottom half of the world ranking—110th out of 144 countries. And yet, Nepal is improving its representation of women in decision making roles. In 2016, women held 30 percent of the parliamentary positions, a sharp increase from years before.

Nepal took significant action with its 2015 Constitution, which set out admirable principles of enshrining special rights and opportunities for women and girls like quotas in the workforce, schools and healthcare facilities, free education for women in poverty, and anti-discrimination policy imbedded throughout Nepal’s governments.

The government of Nepal is working to finalize the Special Opportunities Bill with support from the UN, which touches on this constitutional provision. Taking this bill from the pages to the streets will take a strong commitment on the part of every Nepali in every facet of society.

This means ensuring women who go overseas for work are treated fairly and offered protection against sexual and gender-based violence. This means poor and marginalized women and girls are offered access to the classroom to build their knowledge and skills. This means women have access to alternative and emerging livelihood opportunities.

This also means that attitudes and perceptions that stand in the way of equality and progress change. Nepal is mired in out-of-date notions of what women and girls should be like. Change like this comes from each and every Nepali woman and man, girl and boy. They are the agents of change.

In Nepal, there are champions who have taken up the mantle of showing that women can change attitudes. There is Mira Rai, a former combatant, who is the UN Nepal spokesperson for SDG 5: Achieve gender equality and empower women and girls. She is also a successful trail runner and National Geographic’s Adventurer of the Year, 2017. With her platform of notoriety, Rai is challenging the notion that only men can be adventurers.

There is also Bandana Rana, the first Nepali national to be elected as one of the 11 new members of the Committee on the Elimination of Discrimination Against Women. She is a prominent voice on the global stage fighting for equality, but also brings her messages of change to Nepal.

And there is Anuradha Koirala, CNN Hero Award Winner for her work to end trafficking of women.

She is a strong advocate for ending the exploitation of often the poorest and most vulnerable women in Nepal.

These champions are leading the way in showing what can be accomplished when women’s voices are heard loudly, but also that changing gender roles can have an enormous positive impact on the women and girls of Nepal.

Women and girls belong on an equal footing with men and boys. It’s non-negotiable. Whether at home, in the public sphere, or in the workplace, when women prosper, all of society prospers.

The author is Resident Coordinator of the United Nations in Nepal

RAJBIRAJ, Oct 30: Relatives of the passengers killed in Dhading bus plunge on Saturday have urged the government to find out... Read More...

KHOTANG, Feb 18: A complaint has been filed at the District Education Office (DEO) of Khotang against a teacher on the... Read More...

Call to take action against culprits behind Taukhel school tragedy