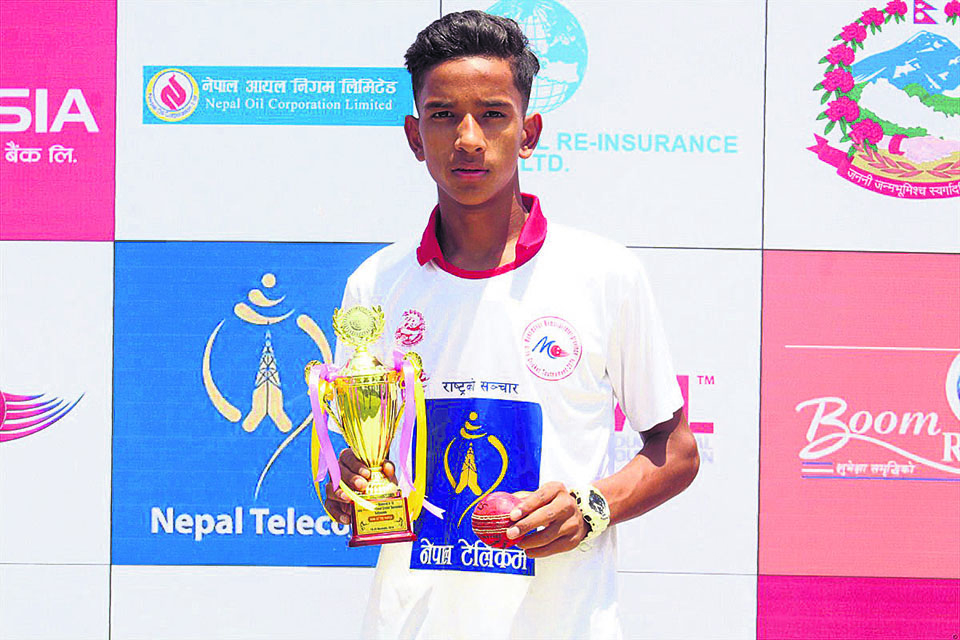 Deepak Bohora of Province 3 poses with the player-of-the-match award at the end of a Manmohan Memorial U-16 National Cricket Tournament cricket match against Karnali Province at Tribhuvan University Cricket Ground in Kirtipur on Thursday.

Player of the match Bohora steered the chase scoring 35 runs from 24 deliveries including seven boundaries after picking up a five-wicket-haul to dismiss Karnali Province for 96 runs in 23 overs. Ashish Bhattari continued his good form with the bat scoring an unbeaten 31 runs from as many deliveries which included three boundaries to help winning team complete the chase in 11.1 overs.
Abhishek Upadhayay remained not out on 15 runs sharing an unbeaten partnership of 28 runs with Bhattarai to seal the victory by eight wickets. Sumit Majhi and Ritik Jung Shah shared a wicket each for Karnali.

None of the other batsmen were able to reach double figures. Bohora’s five-wicket performance was aided by Semanta Ghimire’s 2, Sakriya Pratap Singh and Bharghav Chataut’s one wicket each.

Province 3 is on the top of the Group A points table with four points after winning two out of two matches. Province 3 will play its last group match on Sunday against Sudur Paschim.

In the second Group A match of the day, Sachin Badayak’s three-wicket-haul helped Sudur Paschim down Gandaki Province by four wickets in a match played at the same venue.
Gandaki won the toss and elected to bat first but succumbed to 90 runs losing all its wickets in 20.5 overs. Badayak picked up three wickets conceding 19 runs in 3.5 overs. He was supported by skipper Suwash Ayer’s two wickets from four overs conceding 16 runs.

Sudur Paschim is second on the Group A points table after a win in its first match. Similarly, Gandaki has now lost two matches in the ongoing nationals. In their respective matches, Sudur Paschim and Gandaki will play against Karnali on Friday and Saturday respectively.

KATHMANDU, April 26: Rain played a spoilsport as the third group match between Nepal U-16 and host team Thailand U-16... Read More...