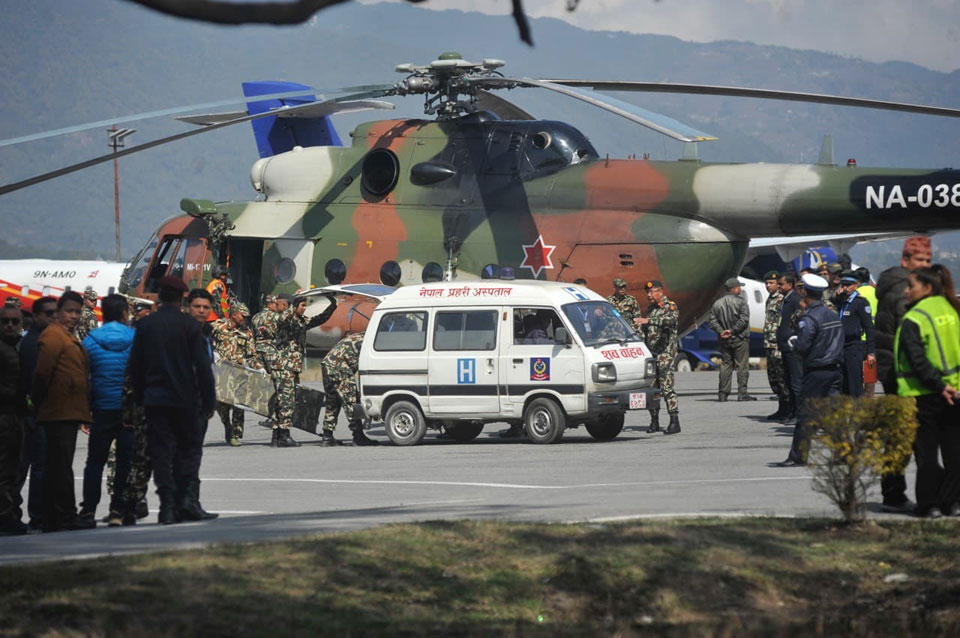 TAPLEJUNG, Feb 28: The bodies of seven people who were killed in the helicopter crash are being brought to Kathmandu after a change in weather.

Chief district officer, Anuj Bhandari said that as the autopsy of dead bodies hadn’t been possible so far.

Earlier, efforts to airlift the bodies of those killed in yesterday’s helicopter crash has been affected after rainfall and snowfall at Suketar.

Yesterday, the helicopter crash in Taplejung district claimed the lives of all seven people on board, including Minister for Culture, Tourism and Civil Aviation, Rabindra Adhikari.

The AS350B helicopter of Air Dynasty was returning to Kathmandu after a visit to Pathibhara Temple in Aathrai rural municipality of Terhathum district when it crashed in the Sisnekhola area at around 1:30 PM.

The government has declared today declared a public holiday to mourn those deceased. The cabinet meeting has also decided that the national flag will fly at half-mast in all government offices. The deceased minister will be cremated with state honors.

The government has also formed a four-member probe commission led by former Secretary Yagya Prasad Gautam to investigate into the fatal crash of the helicopter and submit a report along with recommendations.

Other members of the commission are Brigadier General of Nepal Army Dipak Prasad Bastola, retired Colonel Pramod Lama and Joint-secretary at the Ministry of Civil Aviation Buddhi Sagar Lamichhane.

The body of the late minister will be taken to Tribhuvan University Teaching Hospital for postmortem.  Adhikari’s body will be kept at Nepal Communist Party’s party office at Dhumbarahi and then at Tudikhel for final tributes before taking his last rites.

KATHMANDU: All the seven bodies of those killed in the Air Dynasty chopper crash in Taplejung district have been retrieved. ... Read More...