Bodies of 9 climbers retrieved from Gurja 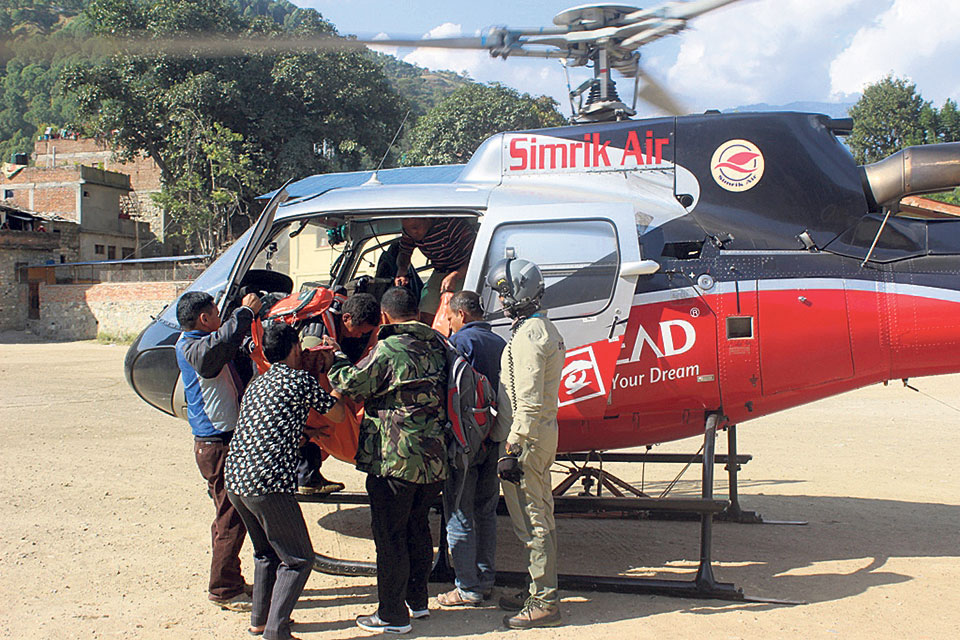 The body of Netra Bahadur Chhatyal, a trekking guide from Gurja, being taken to the District Hospital in Beni for postmortem on Sunday. Photo: Harikrishna Gautam/Republica

MYAGDI, Oct 15: The dead bodies of nine climbers including five South Koreans and four Nepalis who went missing after a snowstorm at Mt Gurja were retrieved on Sunday after five days of futile efforts.

While eight of the deceased have been airlifted to Kathmandu, the body of a local guide Netra Bahadur Chhatyal was brought to the District Hospital, Beni for postmortem. Later, his body was airlifted to Gurja for his family to perform his final rites. The 7,193 meters high mountain lies in Dhawalagiri Rural Municipality-1 of Myagdi district.

"The bodies were scattered 500 meters below the base camp," said Som Prasad Chhatyal, a relative of Netra Bahadur, adding, "They were hardly recognizable."

He stressed that an investigation must be conducted into the incident. Even the tents in the base camp were flown away into a jungle by the violent storm. Recovering the bodies became a challenge even for trained rescue workers due to bad weather and snowfall. As the Department of Tourism opened Mt Gurja for mountaineering for the first time, Kim Chang-Ho, the leader of the South Korean team, decided to scale the mountain with his friends.

Reportedly, Kim Chang Ho had scaled many of the tallest peaks of the world in the past. It has been speculated that the snowstorm must have hit the mountain two days after the team reached the base camp. On Saturday, around 40 locals had attempted to retrieve the bodies from the cliffs and ravine but in vain.

Earlier, seven locals of Gurja has lost their lives in the base camp, according to ward chief Jhak Bahadur Chhatyal. "We must pay attention in building required infrastructures as we lack even the basic infrastructures there," said ward chief Chhatyal.

The relatives of the victims and representatives from the South Korean Embassy reached the incident site by helicopter on Sunday. The team deployed in the rescue work stated that the snowstorm has subsided.

"This incident should not be taken lightly. It needs to be investigated so that no climber will have to suffer the same fate in the future," said Ganga Chhatyal who was involved in the rescue work.

The body of Netra Bahadur Chhatyal, a trekking guide from Gurja, being taken to the District Hospital in Beni for postmortem.

DHARAN, June 9: A total of 28 COVID-19 patients have been discharged from the BP Koirala Institute of Health Sciences... Read More...