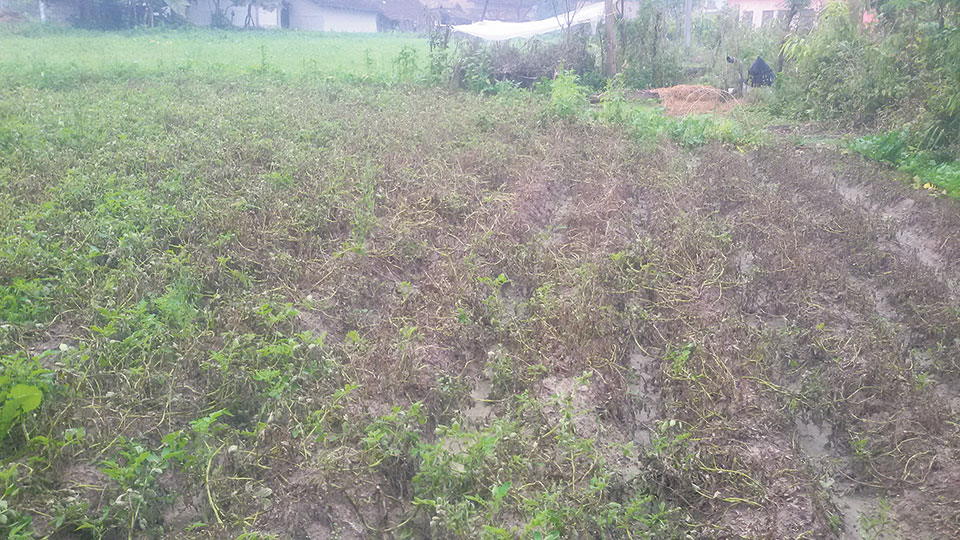 KAILALI, Jan 8: Winter rains and cold waves, as well as the outbreak of Dadhuwa disease (blight), have damaged potato crop in Kailali and Kanchanpur district.

Chandra Dev Joshi of Gauriganga Municipality-7, who has cultivated potatoes in two katha of land, said outbreak of blight has affected his crop. "All the potato plants in my farm have been affected. I will have to face huge loss this year due to the disease as well as cold waves and winter rains," he added.

Joshi had planted a local breed named Tharu in his farm. The crop was looking fine till mid-December. But plants started withering thereafter, according to Joshi.

Not only Joshi, but most of the farmers in his village also have similar stories to share.

Another farmer, Khushi Ram Chaudhary, said blight, as well as cold waves and winter rains, have affected both tomato and potato crops. "Most of my crop has been damaged by blight. Cold wave is causing the disease to expand infestation rapidly," he added.

Many farmers in the area are at the receiving end of blight outbreak this season. When the crop is infected by blight, plants start to dry up.

"Many farmers had planted Tharu variety of potatoes because it is known to withstand pest attacks. Disease spread comparatively faster in other varieties. However, even the local variety was infected. We will have to buy potato and tomato even for our daily use," added Chaudhary.

Potato farming is done in over 10,000 hectares in Kailali.

KATHMANDU, April 6: The Ministry of Health and Population (MoHP) is preparing to conduct rapid mass testing for Covid-19 in... Read More...

KATHMANDU, April 5: The government has further tightened the measures against coronavirus as the crisis entered the second phase with... Read More...

2,400 families of Kailali, Kanchanpur to get landownership certificate

KAILALI, Nov 23: The total 2,400 families living in Kailali and Kanchanpur districts are being provided the landownership certificate. ... Read More...

Man dies after choking on piece of meat
51 minutes ago

Nearly 15,000 goats sacrificed at Rajdevi temple in Janakpur
57 minutes ago