Blacktopping wears off within three months 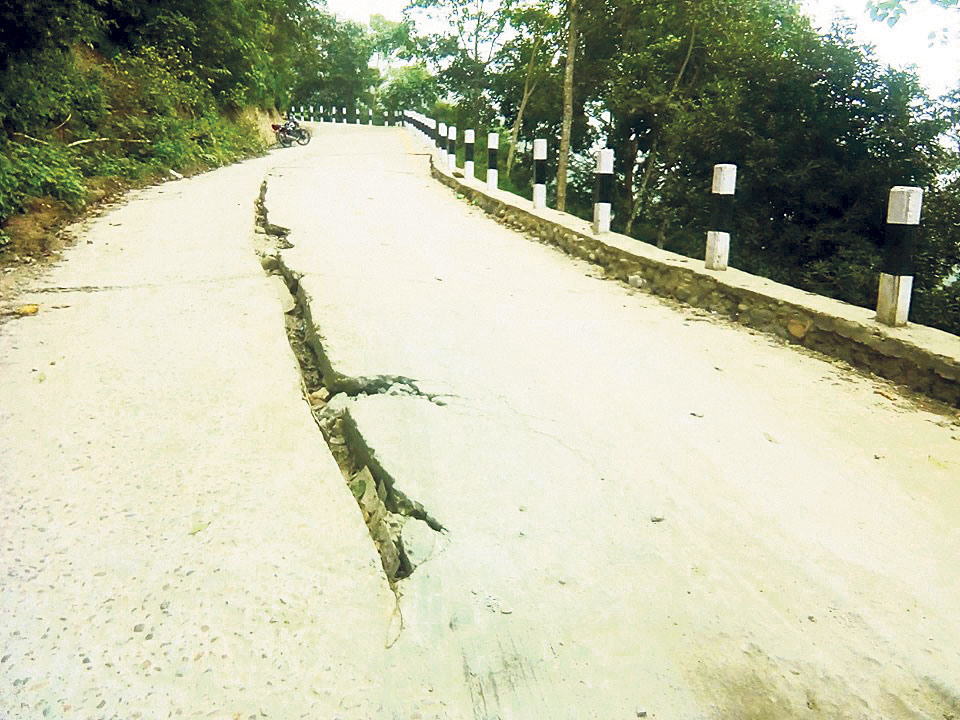 A huge crack is seen along the Solabhanjyang–Sindhuligadhi section of the BP Highway in this recent picture. Photo: Anil Bhandari/Republica

SINDHULI, Nov 3: Solabhanjyang–Sindhuligadhi section of the BP Highway blacktopped just three months ago has begun to wear off. Cracks and holes are visible at different parts of the highway section speaking volumes about the quality of the work done on it.

According to locals, though they were very joyful about the project earlier, things have now left them quite disappointed. The road do not just look ugly but also pose safety threats, they say.

“The road was blacktopped just three months earlier, and yet the asphalt layer is wearing off. How will this road remain usable in the long run? There are all cracks,” said Rajan Adhikari, a local of Kamalamai Municipality.

The roadblock was blacktopped by Mahadev Khimti Ajad JV Construction Company at the cost of Rs 200.6 million. The construction company had expedited blacktopping during the end of the last fiscal year. Terming it as ‘Asare Bikas’(developmental projects carried out at the eleventh hour of the fiscal year to prevent the budget from freezing) locals had criticized authorities concerned.

“And indeed what we were concerned has become a reality now. This is all because of the negligence of senior officials of the road department. Maybe they neglected because they received kickbacks from the contractor. You see, they are all corrupted,” said another local from Kamalamai Municipality requesting anonymity.

He even claimed that officials award projects to contracting companies that promise huge commission. And when officials are only concerned about their commission rather than their duty, things are bound to go wrong, he noted.

Meanwhile, Birendra Devkota, secretary of Kamalamai Municipality – 2 stated that even the local body has been highly concerned of the quality of the road. The road needs to be repaired right away, he said.

“If we do not repair the road right now, it will get worse. Big potholes and cracks may kill commuters, drivers, passengers,” he said.

Stating that the local body is preparing to draw attention of the road department, he said that the construction company must be held accountable and should be asked repair without incurring additional expense to the government.

“When it is a mistake of the construction company, it is important to make them accountable. Anyone who does not works responsibly should not be allowed to escape the consequences,” the ward secretary Devkota said.

The construction company, however, denies all the charges. According to the contractor Gopal Shrestha, weather affected the project.

“It is not our mistake. We tried to do our best,” he said. “But the weather was not good. It remained harsh for a long time. There were unexpected rains every now and then; rains lasted far longer than anticipated,” he added.

He, however, added that the construction company is ready to repair the road. And this is not just because the locals raised question over it. “We are aware that people are not happy with the road. There are indeed cracks and holes. We are going to repair it and this is part of our job rather than a result of public pressure” he said.

Meanwhile, locals have urged the authorities concerned for not depending on the construction company but to take immediate steps to repair the road. If that is not done soon, the road will invite untoward incident for sure, they warn.

“The road may take people’s lives. And if you thinking that the contracting company will fix it, you are just fooling yourself,” said Adhikari. “Even otherwise, our roads are not safe. You are not unknown to extremely overloaded buses. We all must be very wary of such fragile roads,” he added.

GORKHA, Nov 2: The blacktopping on the Chhewetar section of the Bahrakulo-Barpak road in Gorkha has already started peeling off... Read More...

Hotels business thriving in Mulkot due to road connectivity

SINDHULI, Oct 31: Until a few years ago, tourists used to find it hard to get a moderate hotel to... Read More...

Either prove your majority in the parliament or step down, Deuba tells PM Oli
14 hours ago

Do not bring Hinduism in politics
3 hours ago