‘Blackest day of my life’, referee Giri accuses ANFA for humiliation in Thailand 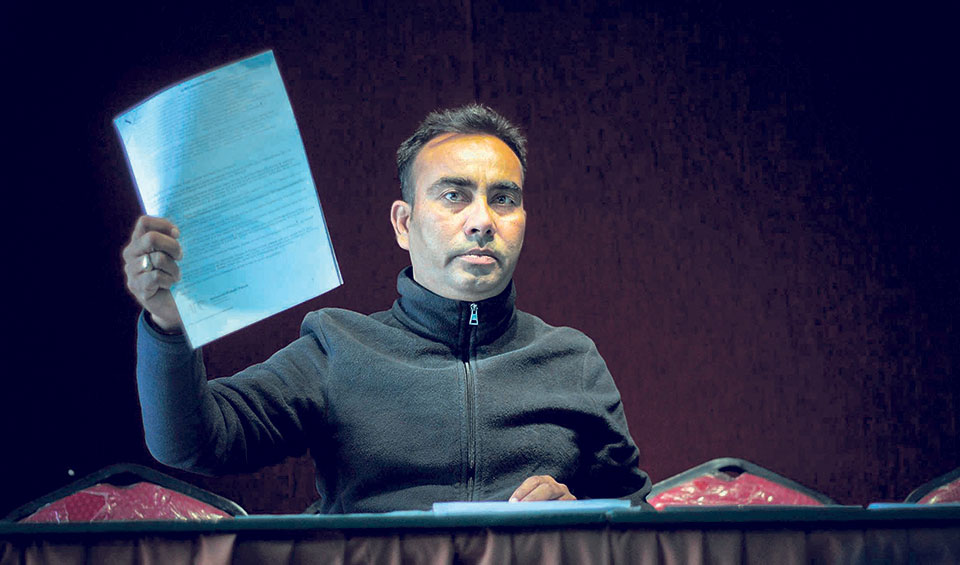 Former FIFA Assistant Referee Kiran Giri shows a document as he accuses ANFA of humiliation in Thailand during a press meet held in Kathmandu on Saturday. Photo: Bijay Gajmer/Republica

KATHMANDU, Oct 14: Former FIFA Assistant Referee Kiran Giri has accused the current leadership of the All Nepal Football Association (ANFA) of being prejudice toward him for being humiliated in Thailand where he went to take part in the Referee Instructor Course, which kicked off this week.

Organizing a press meet in Kathmandu on Saturday, current Referee Instructor Giri said that he felt insulted by ANFA and it was the ‘blackest day’ of his career. The course started on October 9 and it will run till 14.

“I reached in Thailand to take part in the course, but I found out that the ANFA had sent three other people for the course. I had to return back and felt very insulted with that behavior. I went to Thailand on FIFA’s expense, but when I had to return back in such manner, I felt really disheartened,’’ Giri said, “I only knew that ANFA had referred other people for the course when I reached in Thailand.’’

Giri was sent a mail by FIFA on September to inform him about the purpose, format, finance and other travel arrangements of the course along with the name list of all the chosen referees for the course.

After reading all about his inclusion, he talked to the ANFA spokesperson Kiran Rai about it. He said, “I have been sent a mail by FIFA about the course and I don’t know if ANFA has referred me or not.’’

Giri then further added that after the deadline to submit the application was over, and he had not been informed about ANFA’s decision, he talked to Rai, who told him he will be informed after the spokesperson discusses with the President Karma Tshering Sherpa about it. “I was not informed about it. They did not say anything to me. They even said that I received the letter and not them. So I went to Thailand hoping to attend the course.’’

Giri, after reaching Thailand’s airport, was shown a list of the referees attending the course and he was not in it. “I did not see my name there. There was my name in the list I from FIFA and I was at number 25. My name was cancelled from the list and I later found out that ANFA had omitted me from the list,’’ Giri added, “I am not sure what was the point of doing that. Why did the ANFA President wish me luck for the course when I was at the airport? Why was my name in the FIFA list and not there? I was very disheartened because of that and I faced a lot of problems.’’

“I still have not heard anything from anyone at ANFA. I also met them at a function, but all they did was giving consolation to me and act like they did not know anything about it.”

Giri added that along with him, Surendra Sikhrakar and Kalpan Sharma were also nominated in FIFA’s list, but Sikhrakhar did not go, and Sharma was made to return back from the airport. “This is disgusting. The problems I faced should not be faced by anyone.”

“My next step in this issue is that I am going to ask FIFA why was I harassed and why was I in the list if I was to be omitted later. The course is still going on, so I will complain about it afterwards,’’ Giri further added, “This is an opportunity given to a Nepali by FIFA. ANFA did not have to even pay for this. I think they are offended because I stood for the district election which I lost. But if that’s the case, why even ask me to be the head of the referee committee of the Martyr’s Memorial A-Division League?’’

Lastly, Giri was of the view that these sorts of incidents will not help Nepali football and that no player, referee, coach or any official should be judged on the basis of their request, but on their qualifications. “I am not happy with what they did because they did not send more qualified people than me. Even ANFA said that I am more qualified and skilled than the people they sent.’’